Cat positive for FeLV and her eight kittens

Image
Everything comes together in group effort to rescue ‘Octomom,' a feline leukemia positive mother cat, and her eight kittens.
By Jennifer Hayes 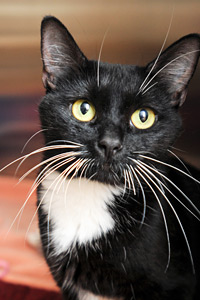 Living on the streets with eight hungry mouths to feed is tough, but then ending up at a shelter with a disease is even more difficult. Luckily, Gem the cat and her eight kittens have a team of folks looking out for them.

After the family was dropped off at the shelter, Gem tested positive for feline leukemia (FeLV). Not a good thing, since this virus requires her to be kept separate from cats who don’t have the virus to avoid spreading the disease. This presents special challenges at a shelter.

Everyone had fallen in love with the kittens and Gem, nicknamed Octomom, but they couldn’t stay at the shelter. There was no space to keep them. So the family was put into foster care while the staff contacted local rescue organizations in hopes that one could take them in.

This particular shelter that was caring for the feline family, Albuquerque Animal Welfare Department, is partnering with Best Friends in a two-city program, made possible by a grant from PetSmart Charities®, to save thousands of free-roaming felines. By trapping, fixing and returning 21,000 cats in the next three years in Albuquerque and San Antonio, the felines avoid the shelter and get to live their lives without producing more kittens. Though this program began in April, Albuquerque Animal Welfare Department is already saving most of the cats, and the number of felines coming into the shelter is going down, despite the fact that spring is typically the time when many kittens begin to show up.

Ready to save a few more lives, Albuquerque community cat program coordinator Desiree Triste-Aragon contacted Best Friends’ Community Animal Assistance for help. Fortunately, there was room, so the whole family was welcomed to the Sanctuary.

"It’s nice to see how everyone worked together," says Desiree, who personally drove the mom and kittens to Best Friends in June.

A new start for eight kittens 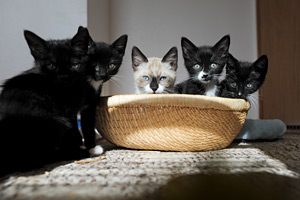 Precious gems themselves, the kittens were all given gemstone names: Diamond, Peridot, Quartz, Citrine, Sapphire, Onyx, Tanzy and Emerald. Since there’s a chance the kittens haven’t caught the mom’s virus, they immediately went into a foster home so they could avoid further exposure.

Keep in mind, taking in eight kittens is no cakewalk. Again, luck was on their side, as Best Friends Network events specialist Rachel Hyde was up to the challenge.

The kittens have taken to homelife with gusto. "They have no boundaries," says Rachel. "I just turn around and they’re in the recycle bin or on top of the couch. They find their way into the highest spaces when I’m not looking. I don’t even know how they manage to get up there."

Gem now lives at Casa de Calmar, the building where cats with FeLV live. Just because Casa residents have the virus, don’t think that slows them down. In fact, Gem’s caregiver Lisa Englund describes her as kitten-like, which is no surprise. Despite having a litter, at only about a year old, she is basically a kitten herself. 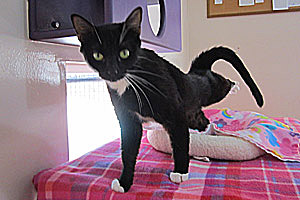 No downward dog for this yoga cat

"She’s very, very social with people," says Lisa, "and she does little yoga poses, where she’ll stretch a leg straight out and will hold the pose." However, show her a wand or catnip toy and all meditative stances go out the window. This gal loves to play.

In spite of their tough start, the entire family is now thriving. Once they’re big enough, the kittens will be fixed and tested for FeLV.

And even if the kittens do have FeLV, we’ll make sure they get all the love and care they need to thrive.

Shelters aren’t appropriate living spaces for everyone. However, animals who are sick, too young or just need a break can thrive in a foster home. Learn more about how to become a foster parent, and together we can bring about a time when there are No More Homeless Pets.