Cats from a hoarding situation at an Alabama apartment complex

Image
Azalea City Cat Coalition, with the help of Best Friends and The Haven, helps cats from a hoarding situation in an Alabama apartment complex.
By Denise LeBeau

The first chapter of Cappuccino’s life was less than idyllic. The snowshoe Siamese cat was found with more than 50 other cats living in an apartment complex in Alabama. Thankfully, Azalea City Cat Coalition (ACCC), the organization that stepped up to the plate to help the cats, was committed to saving all of them. ACCC is a cat rescue group that also runs a trap/neuter/return (TNR) program in Mobile, Alabama. But Cappuccino and her brethren were not outdoor community cats. They were owned house cats busily breeding inside an apartment. 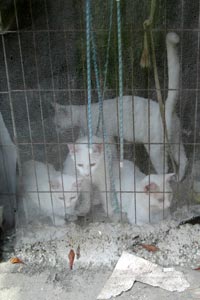 Helping cats from a hoarding case

For more than three years, ACCC has been a partner of the Best Friends No More Homeless Pets Network, a program that works with rescue organizations and municipal shelters across the country to end the killing of dogs and cats in our nation’s shelters. They reached out to Network regional specialist Marla Browne for help.

“Here is a group who continually works so hard to help cats stay out of the shelter, and they met this challenge head on,” says Marla. “I knew we could provide some assistance.” Marla facilitated financial aid from Best Friends so that the cats could be spayed or neutered. She also reached out to another Network partner, The Haven, which was able to take in five of the cats.

It all helps keep the cats out of the municipal shelter. “We know that, typically, when a hoarding case is identified, the knee-jerk reaction is to take them all to the shelter,” says Susan Young, executive director of ACCC. “This can be an immediate death sentence. Shelter conditions are so stressful and often create behaviors in cats that would make them seem feral and unadoptable.”

Foster homes and spay and neuter

Judy Sharp, who often fosters ACCC pets, took in several of the wayward cats, including Sweet Pea, a momma cat with four kittens. “The plight of cats in Alabama is horrible,” says Judy. “I do what I can, and feel I can’t do enough.” 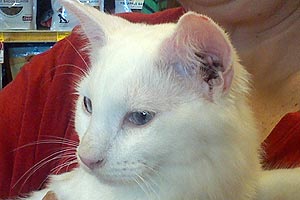 “The adult cats are pretty healthy, and some have the cachet of looking like white Turkish Angora cat mixes,” says Judy. “Sweet Pea wouldn’t eat, drink or use the litter box for three days. But she soon realized I was the giver of the food and she became this huge love muffin,” says Judy. “All the cats are really quite friendly.”

As ACCC works hard at getting all the cats vetted, spayed or neutered and ready for adoption, Susan appreciates all the folks who rallied to see this rescue through. “We are so grateful for the assistance we have received,” she says. “It’s been very rewarding to know we could reach out to Best Friends as a Network partner and get a positive response. As a small TNR group in Mobile, a project like this can feel overwhelming. The contacts we made through Marla were fantastic and made us feel like we are not alone.”

Thanks to the Best Friends financial aid, Cappuccino is spayed and available for adoption. She’s just one of dozens of near-perfect companion animals ready to start their new lives.