Image
Hamilton the pony is finding his way, one small step at a time.
By Best Friends Animal Society
By David Dickson

Dramatic accomplishments are usually inspiring to see. However, sometimes the most exciting achievements can only be noticed by those paying the closest attention.

Hamilton the pony came to Best Friends around a year ago when the group that rescued him closed its doors. At the time, it didn’t take much for him to decide his world was about to come crashing down. He was one shy, scared pony.

Whenever he felt uncomfortable, Hamilton would freeze up and shut down mentally. One time he froze so completely he wouldn’t even blink away a fly that landed on his eye. (Wow.) 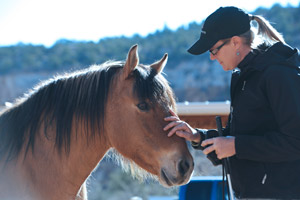 Caregivers wanted to help him learn to trust people, or at least relax around them. They had to use what worked best for Hamilton. For him, that meant consistent routines. "What gives him a feeling of safety and comfort is a routine," says Best Friends horse manager Jen Reid.

One particular positive reinforcement routine — approach and retreat — has been extremely helpful. "In the beginning, I would approach him and come within 10 feet," Jen explains. Then, once Hamilton turned his head toward Jen, she’d back away. The concept was to teach Hamilton that when he made a correct choice, the pressure would lift.

It’s a delicate line, knowing how to push just past his comfort zone to where he’s learning, yet not overly scared. "They need to be pushed a little bit," explains Jen.

As part of the training, Jen also spent undemanding time with him, such as eating her lunch out in his pasture. This way, Hamilton wouldn’t think that every time she came around he was expected to do something. 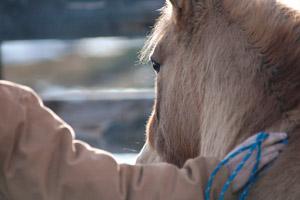 Normally, after months of approach and retreat at 30 times a day, most animals learn that everything will be A-OK when a caregiver approaches. Not quite so with Hamilton. "[His] progress is at a glacial pace," says Jen. In other words, he’s a perpetual skeptic in some ways. Just because something goes well the first 100 times, doesn’t mean the 101st won’t be a disaster.

So, Jen decided to try an experiment. She upped the ante. After a full year (yes, a year), she’d reached a level where she could approach, pet him, and retreat, all with Hamilton remaining mostly calm. Naturally, she wanted to reinforce this positive routine.

In fact, Jen repeated this approach and retreat routine 600 times in one day. Then, another 600 the following day. At that point, even Hamilton conceded the point that he’d more than likely be OK whenever she approached. In fact, the following day he demonstrated a major breakthrough. For the first time ever, Hamilton chose to walk up to the gate when he saw Jen coming to his area.

This was flat-out amazing. "There is a long way to go yet," Jen says, "but solving this piece of the puzzle is a huge step forward and will help us understand him better in the future. He’s taught me so much about patience," Jen explains. "You have to notice the little things."

Training an animal can be a challenge, but it’s always much easier when you have the right approach. Check out this positive reinforcement training article from the Best Friends resource library for more information on how to get started.