Image
Thanks to generous supporters, the animals have a merry Christmas.
By  Kelli Harmon

Betty dove into the giant pile of stuffed toys, flipped on her back, and wriggled happily with her paws in the air and a huge smile on her face. Then she began grabbing toys in her mouth and flipping them into the air. “We eventually had to lure her out of the toy trailer with treats, or she would have stayed there all day,” says vet tech Betsy Kidder. It was Christmas, and Betsy, who played Santa for the day, had to stay on schedule to make sure that all the dogs in Dogtown received the toys and treats sent in from around the country to make their Christmas a special one.

Generosity from around the country 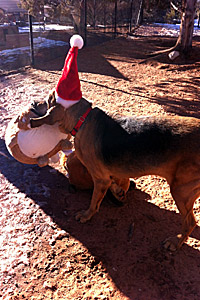 No matter what holiday they celebrate, it’s clear that Best Friends members love giving gifts to the animals at the Sanctuary. Donated toys, treats and wish list items begin arriving at the Sanctuary months before the holidays — many with explicit instructions from the sender to save the gifts until Christmas.

Robin Jackson, team lead in Cat World, says, “I’m just overwhelmed with the generosity of our supporters; it blows me away. They think about us every Christmas, and they want to make sure that the cats and the different departments get what they need.”

The animals at the Sanctuary must have been extra good this year, because there were piles of thousands of toys, treats, beds and blankets to give out. Betsy was the designated “sleigh” driver for Dogtown this year. She drove the truck that pulled a trailer full of goodies, stopping at each octagon to deliver the presents. At each stop, caregivers brought out one dog who got to dive into the trailer full of toys, for no other reason than “why not?”

Betsy explains that the best part of the day is watching the animals play with their new toys. Like Hugo, a big hound dog who loves nothing more than a huge stuffed animal. Betsy says, “Watching Hugo throw around the huge stuffed toys we saved for him was fantastic. He’s 11 years old, but you put a big toy in front of him and he’s a kid again.”

Save that cardboard box 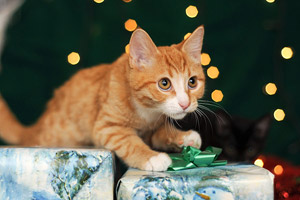 Meanwhile, the cats at Cat World had a great day not only due to the brand-new donated cat trees, beds and a year’s supply of their favorite food and treats, but because the day was arranged to allow plenty of “cat time.” Extra projects could wait until the next day, giving everyone even more time to play with and cuddle the cats. And the new holiday loot is great for enrichment. Robin says, “The cats’ eyes get big, and they come to explore and check everything out. Anything new is like a playground to them.”

And in the same way that toddlers often love the box their new toy came in as much as the toy itself, the boxes from Christmas bounty are also put to good use as hidey holes for the cats to play in. “The kittens especially love the cardboard boxes,” Robin says.

Around the Sanctuary, all the animals and people got something special. Whether it was hot chocolate and cookies brought around to all the caregivers on duty, the paper-wrapped presents the birds in the Parrot Garden got to open themselves, or extra veggie treats for the bunnies and pigs, one thing’s for sure: If the animals couldn’t be in their forever homes for the holidays, Best Friends was the next best place to be.

Consider helping the animals at the Sanctuary today. Donate now.