Image
Rescued stray pig first goes to Ironwood Pig Sanctuary in Arizona and then comes to Best Friends, where he is excelling at clicker training.
By Christelle L. Del Prete

Kennedy the pig trots up the ramp, across the flat part at the top and back down the other side. He’s aced this routine after only a few training sessions. Chewing the tasty fig cookie he’s earned as a reward, he swishes his tail happily as he awaits his next challenge.

Next, he’ll learn to push a toy bowling ball up and down the ramp. Dogtown trainer Glenn Pierce places the ball halfway up the ramp and holds it there. Kennedy steps his feet up to the bottom of the ramp and starts nosing at the toy as if he’s rooting for something beneath it. 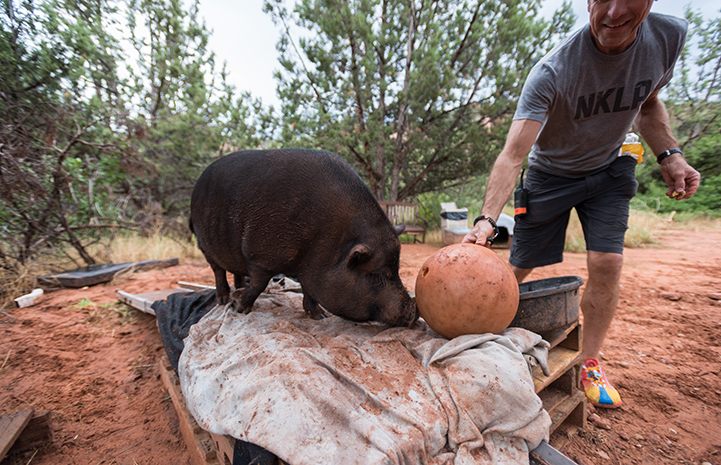 These exercises might look like they are just fun games. And they are — in part. Kennedy certainly seems to be enjoying himself and staying entertained. But Glenn is also helping the two-year-old pig learn important life skills that will not only make Kennedy more appealing to potential adopters, but will help him fit in and be happier while he’s living at Marshall’s Piggy Paradise.

Kennedy came to Best Friends from Ironwood Pig Sanctuary a little over a year ago. Ironwood took him in after he was found wandering around behind a “big box” store. While no one knows what his life was like before he was rescued, Kennedy didn’t have the best social skills. When he moved into Marshall’s Piggy Paradise, he thought he was the boss of the sounder, which is the name for a community of pigs. And he wasn't always very nice to the other pigs. He was a little pushy and not so good at respecting boundaries. 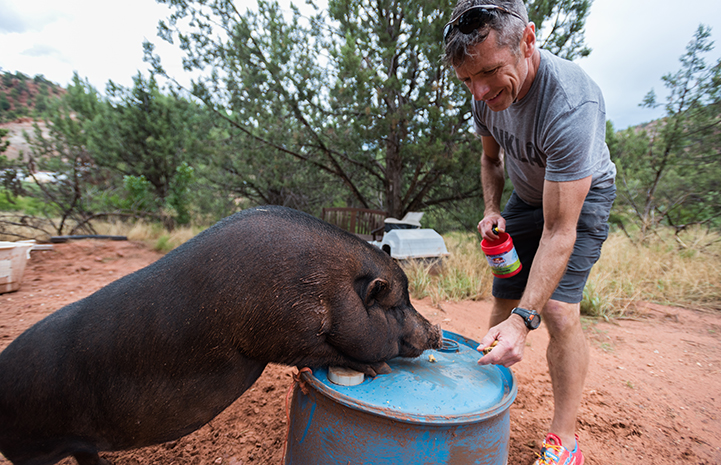 While Kennedy wasn’t aggressive toward the other pigs, he didn’t make himself very pleasant to be around. After getting to know him, staff believed that Kennedy would settle in better if he could relax a bit and gain some confidence so he didn’t feel like he had to prove anything. His training sessions with Glenn are helping him gain both calmness and confidence.

Clicker training can work with all sorts of animals, which is why the method is used with not only dogs but also cats, bunnies and pigs at the Sanctuary. Glenn explains that, while all species learn the same way, there are some important differences in the things that motivate them to learn, as well as differences in their body language and vocalizations.

The mechanics of training also changes. You can't, for example, expect to feed a pig treats the same way you would most dogs. (Kennedy prefers his cookies crumbled into chunks and set on the ground in front of his snout rather than fed by hand.)

Kennedy is certainly not the first pig to get clicker training at the Sanctuary. But he’s so smart and curious that he’s been one of the best students. Now that he’s learned to walk up the ramp, he’ll have no problem when he needs to climb into a trailer or a van. He’s also learned how to walk in perfect figure eights around a barrel and around Rosalie Wind, one of his caregivers. He can put his front feet up on an overturned bucket, and he’s now working on the cue “sit,” which admittedly is a bit harder for him. 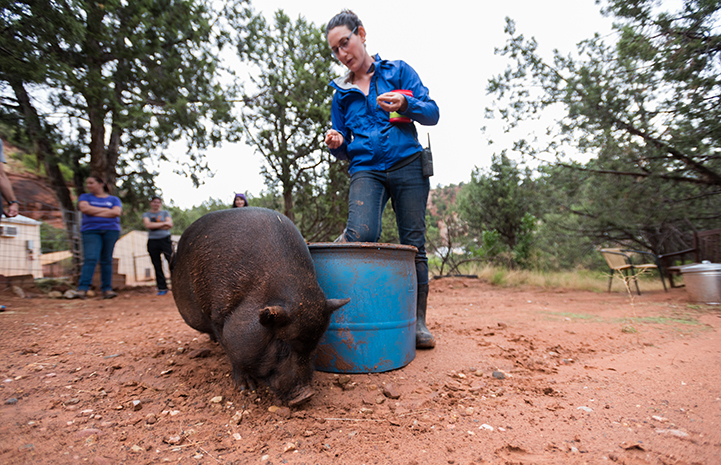 That’s OK, because Kennedy enjoys these challenges. Rosalie says, “It’s fun for him to keep busy.” Pigs are so intelligent that they get bored quickly, she explains. Glenn adds, “Getting him to think, exercising his mind, can be as beneficial as exercising the body as far as enrichment.”

For Kennedy, the training sessions really combine the best of both worlds: short-term fun and entertainment, plus long-term success and well-being. With all of his trips up and down the ramp and walking around in figure eights, Kennedy gets physical exercise as well as lots of extra one-on-one attention, clicks and cheers — and plenty of fig cookies (his favorite treats).

Greeting future challenges with a cool and calm attitude

And long after Kennedy gets his snout under the big orange ball and gives it a big shove that pushes it up the ramp and down the other side, he’ll be able to enjoy the impact his training has on other areas of his life. Since he started working with Glenn, he’s become more confident and relaxed. His relationships with people are better than ever, and he’s mellowed out and found his place in the pig herd.

Best of all, Kennedy is now confident enough to eagerly greet any future challenges — whether that’s compromising with his piggy peers, pushing a bowling ball into a goal box, or walking up a ramp and into a van to go to a new forever home.

Help more animals like Kennedy get the royal treatment they deserve 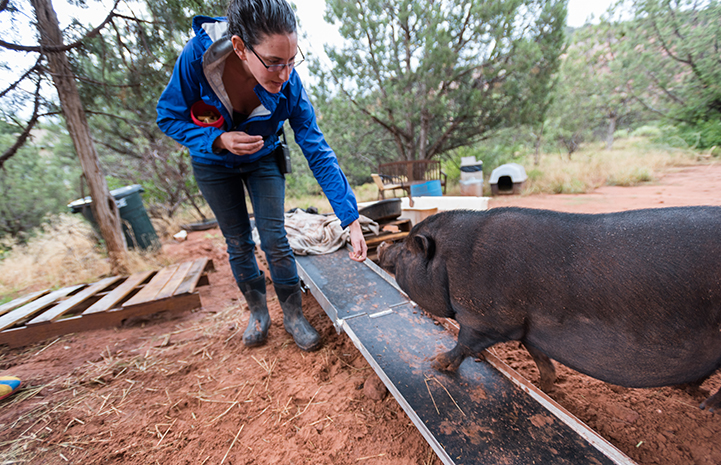