Image
Two cockatoos, a bonded pair, find safety at Best Friends Animal Sanctuary, and love after being adopted in a new home together.
By Christelle L. Del Prete

Houdini and Kaccia are soul mates. The two cockatoos stand as close as they possibly can while Kaccia nuzzles Houdini’s pale pink feathers, and he preens her snowy white plumage. Today they’re a happy pair, but they both went through a lot before finding the happiness they had been without for so long.

Cockatoos with no reason to trust

Houdini came to the Parrot Garden several years ago, after he and his mate were abandoned with no food or water. Although he was rescued and brought to the Sanctuary, sadly, his mate did not survive. The loss completely shook Houdini’s confidence in people. “Houdini didn't trust humans, and really had no reason to,” says Parrot Garden manager Jacque Johnson.

The caregivers didn’t push Houdini. “Birds are remarkably particular about their relationships,” explains Jacque. “I compare them to college roommates. They might become instant friends, they might be friendly but not close, they might barely tolerate each other and sometimes squabble, or they might have an instant mutual distaste for each other.”

Since Houdini seemed to have an instant dislike for every other bird he met, it looked as though he might live alone forever.

Meanwhile, Kaccia, a lesser sulfur-crested cockatoo, arrived at the Sanctuary feeling much the same way Houdini did. She’d been used for breeding almost her whole life (more than 20 years), and had also lost her mate and was grieving. Plus, she’d never had any reason to trust people either.

Like Houdini, she would sit in the back of her enclosure all day, ignoring people. And, like Houdini, when her caregivers tried to match her up with another bird, she turned her back on them. It looked as though she, too, might be happier alone.

But then Susan Tuck came along, and that led to life-changing consequences for both birds.

“I like to adopt the hard-to-place birds, the ones who will probably never find a home of their own,” Susan explains. She was immediately drawn to Kaccia, because she knew most people want to adopt birds who like people. But Susan was willing to just let Kaccia be herself.

So Susan took Kaccia home, renamed her Melanie, and gave her a wonderful life full of love, good food and toys. But she had a feeling that something was missing. She couldn’t get another shy cockatoo out of her mind. “Even before I got her home, I was thinking about Houdini,” Susan says. So, not long after she adopted Melanie, she returned to the Parrot Garden to adopt Houdini, too.

Houdini and Melanie’s lives were both made infinitely better when they got to come to the Sanctuary for special care and love when they needed it most. And they were lucky to find a great home with Susan. But just when it seemed like life couldn’t get any better, it did. 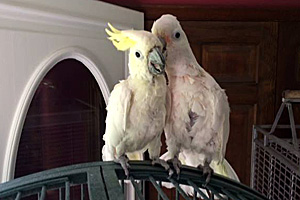 One day, when Susan wasn’t home, Houdini let himself out of his enclosure. (He’s always been good at that, which is how he got his name.) But he didn’t stop there. Ignoring Susan’s other birds, he climbed right over to Melanie’s enclosure and worked on the door latch until it came loose and she was free as well.

When Susan returned home, the two birds hadn’t tried to escape the house. Instead, Susan says, “There they sat — cuddling, muttering, grooming, leaning into each other.” They had made themselves clear: They wanted to be together.

Now the two birds not only have a home where they get plenty of care from Susan, they have each other to love.

To help more animals like Houdini and Kaccia go from homeless to home, become a Best Friends member.