When one thinks about government jobs, images of 9-to-5 office work or bureaucracy might come to mind, but what about philanthropy? Thanks to the Combined Federal Campaign (CFC) program, that charitable inclination is becoming a more accurate portrayal - and Best Friends is now benefitting.

Every year, from September 1 to December 15, roughly 4 million federal employees have the opportunity to donate or sign up for a payroll deduction to be given to one of the thousands of nonprofits that participate in the CFC. Kindhearted government workers donate millions of dollars to good causes in what has become the world's largest workplace giving campaign.

"The Combined Federal Campaign, or any type of workplace giving campaign, is just a really easy way for donors to contribute to Best Friends," says Myla Burns, Best Friends' manager of workplace campaigns. "It's easy for employees, it's easy for workplaces, and it's great for us. It's really a win-win-win."

And Best Friends volunteers are helping to spread the word. 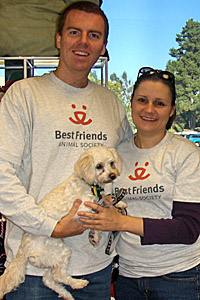 As trial attorneys working for a federal agency, Emma and David Warner first discovered Best Friends through the National Geographic television show "DogTown." Liking what they saw, Emma did a little research and discovered that Best Friends not only rescues dogs, but also other species like parrots. Self-professed "parrot people," the couple made the vow to one day visit the Sanctuary. Flash forward four years, and they made good on that promise to themselves.

Their plan was to volunteer with parrots and horses. However, Emma was just recovering from a cold, so couldn't help at Horse Haven, because the pigs who live there are susceptible to catching the illness. It must have been serendipity, because instead they chose to work in Dogtown and experience a sleepover. When asking for a canine recommendation, David noted they had never had a dog before, so asked, "What's the easiest, most simple, basic dog that you have?" They were given Jewel who ended up spending a second night with them as well.

Jewel captured their hearts, but they worried the dog might not mesh with their lifestyle. Leaving the Sanctuary, the couple visited nearby national parks, never able to get the little dog out of their minds. Cutting their vacation short, they returned home to Orange County, California, and came to the conclusion they needed to adopt. The next weekend they drove to pick Jewel up.

Now named Bella, the petite pooch has joined David and Emma as an advocate for Best Friends.

In addition to volunteering locally for Best Friends in Los Angeles by helping with pet super adoptions, Pup My Ride lifesaving dog transport program, and mobile adoption events, Emma and David encourage fellow federal employees to donate to Best Friends through the CFC. Last fall, the couple, along with Bella, represented Best Friends at CFC kickoff events in Los Angeles and Laguna Niguel, California. And because they're in L.A., they discuss the work Best Friends does locally, encouraging people to visit and adopt from the Best Friends Pet Adoption and Spay/Neuter Center. 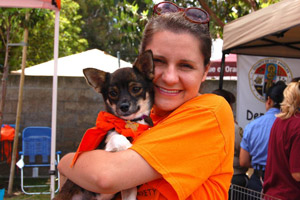 The couple has truly taken our mission to heart, and knowing that every year 4 million dogs and cats are killed in America's shelters simply because they don't have a safe place to call home, they both believe everyone can make a difference.

"The reality is if everybody did their part - donate a little bit of money, adopt instead of buy from a breeder, or do some mobile adoptions - we wouldn't have this problem at all," says Emma. "I feel that we have a responsibility to do our little part and think if more people would do their little part, then we're going to Save Them All."

Federal workers can sign up to donate to Best Friends through the Combined Federal Campaign through December 15, 2013, by finding us in the National Independent Agency section of their hardcopy or online CFC booklet. Support Best Friends by selecting CFC number 42164. Many other employers have fall workplace giving campaigns; visit www.bestfriends.org/workplace for more information.