Community cats are family, too

Image
Young boy with muscular dystrophy is allergic to cats, but stray cats in his neighborhood who become part of TNR program are now part of his family.
By Denise LeBeau 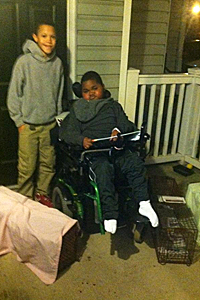 No one heard the tiny, fuzzy black and white visitor enter the house. But the shrieking from his sister’s bedroom alerted 10-year-old Louis to the fact that Oreo the kitten had made his way inside. Oreo was shooed out, since Louis is allergic to cats because of complications from muscular dystrophy.

Oreo and a few other kittens had showed up at his house in July, and even though allergies meant the kittens couldn’t stay with Louis, he loved them. When his mom, Orvia Cushnie, saw how much they meant to her son, she set them up as permanent residents with shelter and a feeding station on the porch. The Cushnies took great care of the wayward kittens, but they hadn’t yet learned about trap/neuter/return (TNR). Since they live in DeKalb County, Georgia, the help they needed was just a phone call away.

When two of the kittens started looking ill, Orvia called around to local veterinarians for help. She found a clinic that would help the cats and provide low-cost spay or neuter surgery. The vet also said it would be necessary to transport the cats to the clinic in traps. Orvia emailed local animal control to borrow some traps and immediately received a call back from Janet Samuel, Best Friends’ Atlanta programs community cat coordinator. She was on her way.

Janet fields dozens of calls each month to help the community cats of DeKalb County referred by local animal control agencies. Since the spring of 2012, Best Friends has supported the Atlanta area’s no-kill goals through the Best Friends DeKalb Community Cat Program, which provides free spay/neuter to community cats. When Janet heard about the situation with the sick kittens at the Cushnie home, she not only brought traps, she also brought her son, who is Louis’s age, to reassure Louis, who was concerned the cats wouldn’t be returned. Janet and her son promised that the cats would be back.

Oreo and the two other kittens were brought to LifeLine Animal Project, an organization that partners with Best Friends to provide spay/neuter surgeries for the program.

Unfortunately, the two kittens the family was concerned about were too sick to be saved. Veterinarians at the clinic didn’t know what was wrong them, but the kittens passed away in peace. And thankfully, whatever they had wasn’t shared with Oreo. The little tuxedo kitten was neutered and given a clean bill of health. LifeLine Animal Project provided beautiful urns for the kittens who didn’t make it. Janet returned to the Cushnies' home with Oreo, playful as ever, and the commemorative items.

Community cats are part of the family 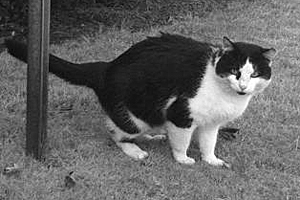 ​Orvia says, “Janet sat and talked with Louis for a long time about what had happened. She really cared and opened a dialogue with Louis in the most understanding and loving way.”

Louis was overjoyed to see Oreo again, and the cute tuxedo kitten has jumped right back into his rightful spot in the Cushnies’ lives. He continues to thrive and gets all the love and affection of a house cat. When the Christmas tree went up, he made his way into the house to explore its branches. When Christmas dinner was served, Oreo got his own special plate. “Oreo is an important part of our lives, and makes every celebration brighter,” says Orvia.

A few new cats have showed up at the Cushnies’ house, and, of course, Orvia knows who to call to get them spayed or neutered. Orvia says, “Best Friends understands that these kitties are more than community cats to us. They’re our family.”

Photos by by Janet Samuel