Image
Wilhelmina had never learned how to play and redirected her stress onto people, but with time and patience she's finally able to enjoy life.
By Sarah Thornton

For a while after she arrived at Best Friends Animal Sanctuary, it seemed like Wilhelmina might never get along with other cats. She was a single kitten and had never learned from brothers and sisters how to interact in a way that was fun for everyone. Even the sound of other kittens playing nearby kept her on edge and she showed it by growling and staying tucked away in a hiding spot.

Wilhelmina also started redirecting onto her caregivers by swatting when it was mealtime or grumbling when someone would walk past. She was overstimulated and didn’t have a way to express herself properly. And so caregivers set out to help her. 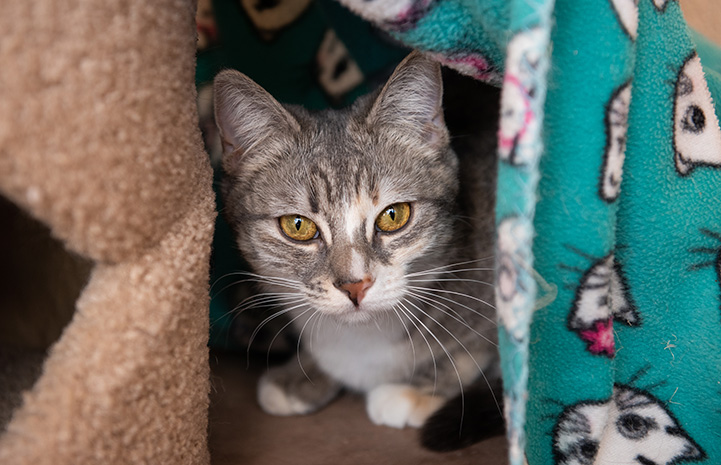 Kitten gets comfortable with people

Wilhelmina came to us (along with many other kittens) with a mild case of ringworm, an easily treatable fungal rash that requires time in quarantine. Even though she couldn’t see the other kittens, she was stressed out by the noise they made. Spending some time bundled up on a caregiver’s lap in a separate, quiet room gave her both time to relax and time with a human in a less stimulating environment.

Still, as soon as she heard another cat, she would get upset all over again. So, when she was ringworm free and it was time to move into one of the buildings at Cat World, she went to a building with smaller rooms for individuals or pairs of cats. To give her some quality time with people, she was set up in the conference room. When it was time for a meeting, she was able to run around and interact with staff as much or as little as she wanted.

At first, she continued to grumble even when someone would try to toss or wave a toy for her to play with. And even when she became more comfortable, she didn’t have any bite inhibition, which she normally would have learned from siblings.

She did like treats, though, and that meant clicker training could be the perfect outlet and directional tool. Caregivers taught her that bumping her nose on a small, extendable pole (instead of their hands and fingers) meant she got a delicious snack.

By having her focus on positive reinforcement and being careful not to let her get too rough during playtime, Wilhelmina started to gain the confidence and restraint needed to safely interact with people. Soon enough, she was trotting over the tables and asking nicely for attention.

Finding her a feline friend was more challenging. 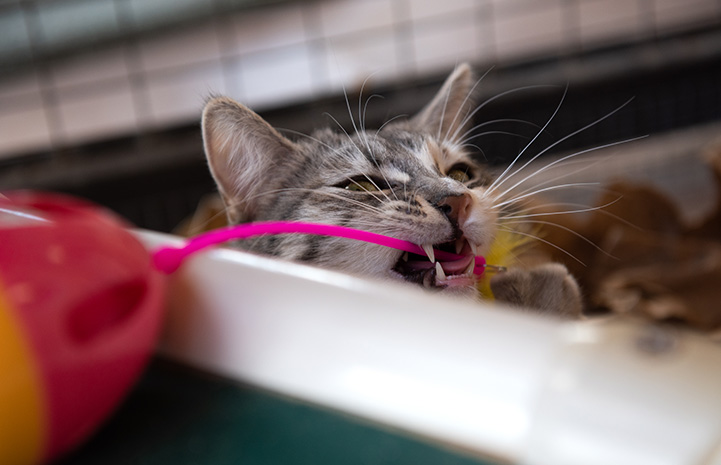 Learning to play with another kitten

For Wilhelmina to have the best chance of getting adopted, she would have to learn the important skill of getting along with other cats. But when they tried a couple of times to introduce her to other cats her age, she would hiss, swat and scare them away. She had no interest in sharing her space (much less her toys) with any of them. And for the most part, the other kittens kept their distance.

Then Tres entered the picture. 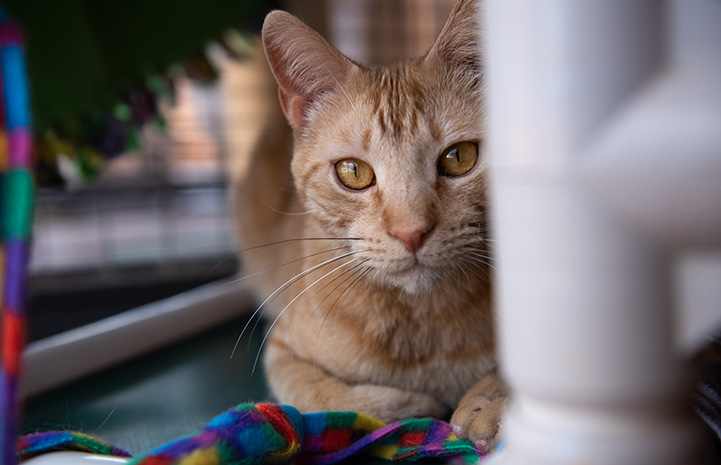 An easygoing orange tabby, Tres didn’t mind Wilhelmina’s attempts to chase him off. He didn’t get scared of her growling or swiping at him. He didn’t give her any of the reactions she was used to. To him, it became a fun game of chase. Tres just wanted to play with this toy or explore that corner, and if Wilhelmina was nearby, all the better.

Unable to intimidate this strange new cat (and likewise not being retaliated against), Wilhelmina could do nothing but also play with that toy and explore this corner. And then they were playing with the same toys and, suddenly, Wilhelmina had a friend. They were moved into a room together, and it’s been playtime ever since. 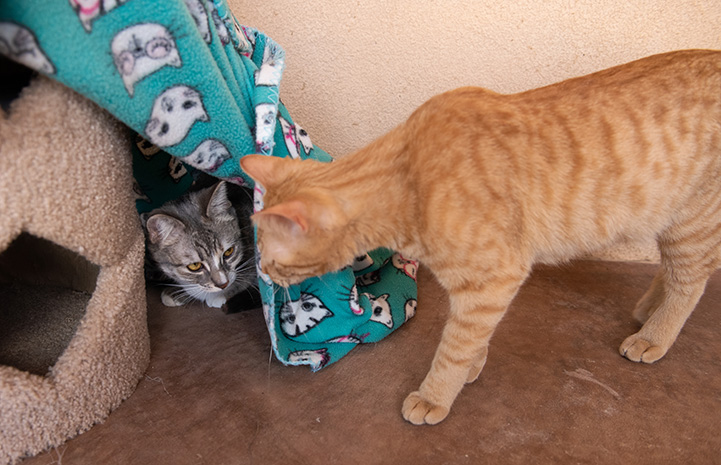 Wilhelmina’s transformation from a cranky kitten who wanted nothing to do with anyone took time and patience. But the result is a happier cat who can play comfortably with people and her best kitten friend. She can roughhouse with Tres and enjoy a good head scratch without getting overwhelmed and using her claws or teeth.

She’s able to calm down and relax, and doesn’t feel like she needs to grumble at every other sound. Making friends isn’t impossible. And she can finally enjoy her time, jumping and tumbling around her room and down the halls, lighter and happier, waiting for the perfect home for the perfect kitten. 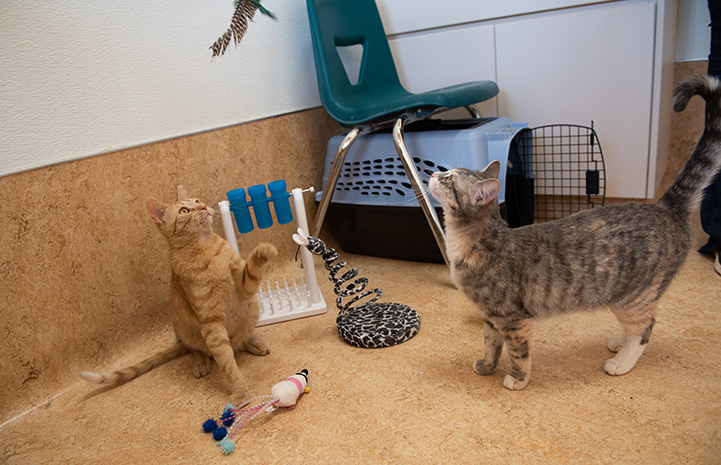