"The only constant is change," says Clint Thacker, Davis County Animal Services director, regarding the progressive lifesaving directions his agency is embracing.

The extent of their accomplishments can be summed up in the story of Betty and Sue, two older Chihuahuas found abandoned under a shed. A year ago, their story would have ended here in this Utah shelter. Being over five years old, their chances of going to a new adoptive home were slim. 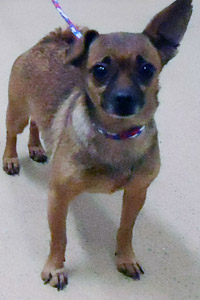 But that was then and this is now. Betty and Sue were made pets of the week on Davis County Animal Services’ website and featured for adoption at PetSmart in Layton. That’s where Elois Kelley met them.

Elois was looking for a pet to ease the pain of recent losses, including the death of her husband in November. Elois, who was only looking for one dog, met the bonded pair and just couldn’t split them up. When she learned she could get them both for a reduced adoption fee, that helped seal the deal.

"I’m glad I took both of them. They entertain each other as much as they entertain me. I was happy to help save a life, but really I wanted a nice dog to enjoy the day with, and now I’ve got two," shares Elois.

Davis County Animal Services no longer adheres to an antiquated notion of animal care and control. From partnering with PetSmart to offering adoption fees on a sliding scale, each step they’re taking is towards going no-kill. They don’t euthanize for space anymore, and they’re about to get another boost in the lifesaving arena.

Best Friends will be funding an adoption specialist, who will not only help with adoptions but will be involved in planning events, coaching folks trying to relinquish their animals, and working within the organization to cultivate relationships with other rescues.

From law enforcement to education

Davis County’s animal control officers responded to 20,000 calls last year, and impounded 11,000 animals. Doing things differently with this kind of pressure can be daunting, but they’re reaching their goals.

Shelter manager Tracy Roddom has been with the agency for 12 years. She has seen firsthand how they have shifted their focus from law enforcement to education.

"When I first started, we didn’t work with other rescue groups, we didn’t do temperament testing, we didn’t adopt out bully breeds, we didn’t use volunteers, and we didn’t participate in Super Pet Adoption events. Now we’re part of a bigger movement working together to save lives. ... We’ve also done our very first vaccination and microchip clinic and that was so successful," enthuses Tracy.

Miracles in the making

Clint has been with Davis County since February 2011. Prior to that, he was with Salt Lake County Animal Services, and before that he was an animal control office for Sandy city.

"I’ve seen too many animals euthanized and that was the old way animal care was run," says Clint. "Going to Salt Lake County opened my eyes to what can be done."

Clint looks forward to saving even more animals in 2012. Davis County has begun a cat licensing and microchipping program, they’ve recently had a state-of-the-art dog play area donated by the Building Owners Managers Association, and they’re excited to partner with Best Friends.

"Best Friends is an organization that just gets it right," says Clint. "Working with Anna Gonce (of Best Friends’ No More Homeless Pets in Utah) has been amazing, she’s got such a vision and understanding of where we’ve been and what we’re trying to accomplish, we are so excited about the future."

Help save a life and adopt your next companion animal.