Image
Deaf white pit bull, with blue eyes, a pink nose, and a calm and loving personality, is adopted just in time for the holidays by the perfect couple.
By Tara McKenney

“I’m not ignoring you, I’m deaf,” reads the pink bandana Delilah wears around her neck. Though she can’t hear her new family members express their love verbally, she feels it through their affection.

At just two and a half years old, the sweet pit bull terrier mix lost her home and ended up at Los Angeles Animals Services. Her luck turned around when Wags and Walks brought her into its rescue program.

“Delilah is an incredibly special dog,” says Erica Fox, director of animal placement at Wags and Walks. “We knew she was awesome when we rescued her — before we even knew she was deaf,” she says. “But once we realized she had a disability and still had the most amazing temperament, it made us love her even more.”

Delilah was brought to the NKLA Pet Adoption Center and she settled right in. The center not only houses Best Friends’ own adoptable pets, but also adoptable pets from partner organizations like Wags and Walks. 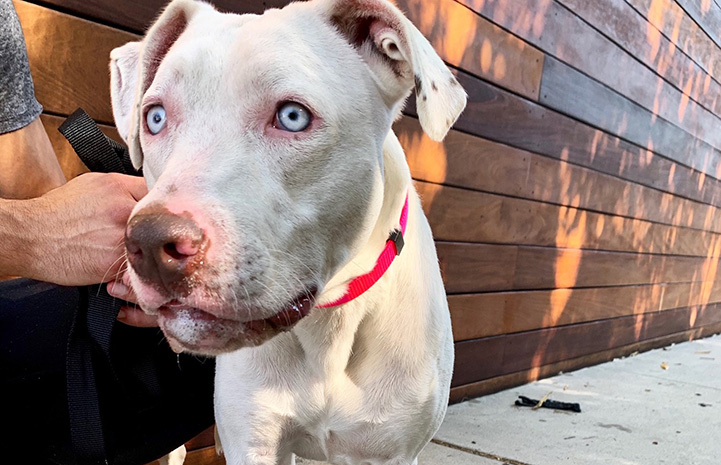 Delilah’s sweet personality and puppy-like exuberance made her a favorite with the center’s volunteers and staff. With crystal blue eyes, a white coat and a pink nose, Delilah immediately caught your attention, even if it took you a moment to catch hers, since she cannot hear.

I was not immune to her charm and brought her home for an overnight stay as part of Best Friends’ slumber buddies program in L.A.. I kept the bathroom light on all night to offer her some visual comfort in an unfamiliar environment, and while I continued to talk to her knowing she couldn’t hear me, she responded to basic cues. Delilah seemed to love her time in my home. Luckily, it wasn’t long before she’d get to go home with someone permanently. 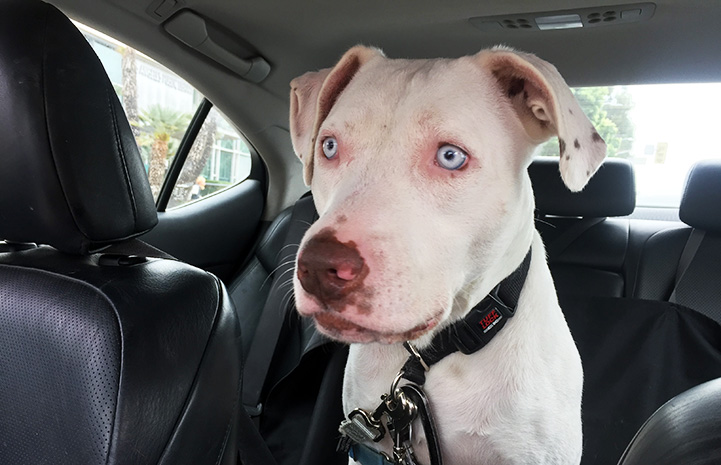 The following weekend, Jordan Garcia visited the center and found himself smitten with Delilah as soon as he met her. “I was attracted to her because of her calm and loving personality,” he says. Undeterred in his decision to adopt Delilah despite her deafness, Jordan just knew he and his girlfriend would have to find a different way of communicating with her.

Since bringing Delilah home, Jordan has learned a lot about how to adapt life to accommodate a deaf dog. “One of the challenges we face is that it’s hard to communicate with Delilah when she’s not looking at you,” Jordan says.

Simply touching her to get her attention when she’s looking the other way has been the most effective so far, says Jordan. He has reached out to a trainer who works with deaf dogs so he can learn how to teach her different cues. His goal is to keep her safe outside of the home, since simply calling her name is not an option.

Deafness hinders a dog’s ability to sense danger, such as oncoming cars or wildlife, so establishing eye contact and visual cues is critical to ensuring the animal’s safety. Deaf dogs navigate their environments by relying on their other senses — especially sight, smell and touch.

Jordan and his girlfriend have already taught Delilah specific hand signals for basic cues: sit, stay, lie down and walk. Stomping on the floor helps alert Delilah to their presence, and approaching from the front helps them avoid startling her. 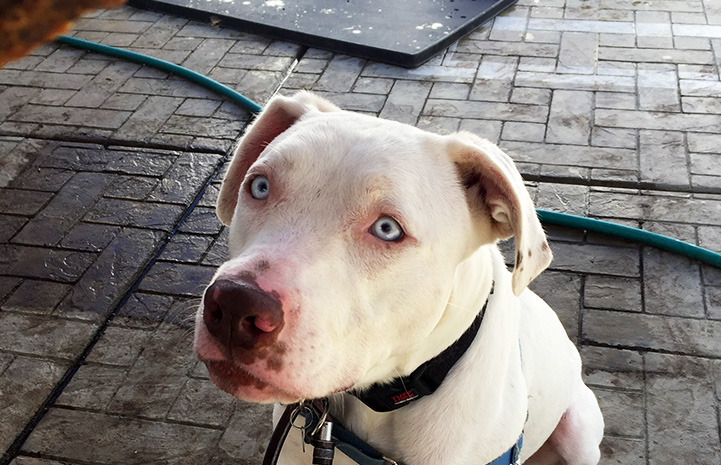 Giving a second chance to homeless pets with special needs

Pets with special needs end up in shelters just like other pets — through no fault of their own. And while one may assume they are the hardest to get adopted, sometimes they stand out in the crowd because they need more help, which touches the hearts of potential adopters willing to take on additional care.

“Special needs dogs should not give pause to potential adopters, because they are just as deserving — if not more so — of a loving forever home and will appreciate you that much more,” says Erica.

Delilah isn’t letting deafness stand in her way of enjoying her new life outside of a shelter. She absolutely loves to cuddle on the couch with her family, and one of her favorite activities is running on the beach.

When asked how adopting Delilah has made a difference in his life, Jordan says: “It’s rewarding to know that she now has a home and will no longer be in and out of shelters. When you initially learn that a dog is deaf, you imagine that it will be a challenging experience. But actually, she is no different than any other dog. It’s just changing the way you communicate.”

Help save a homeless pet 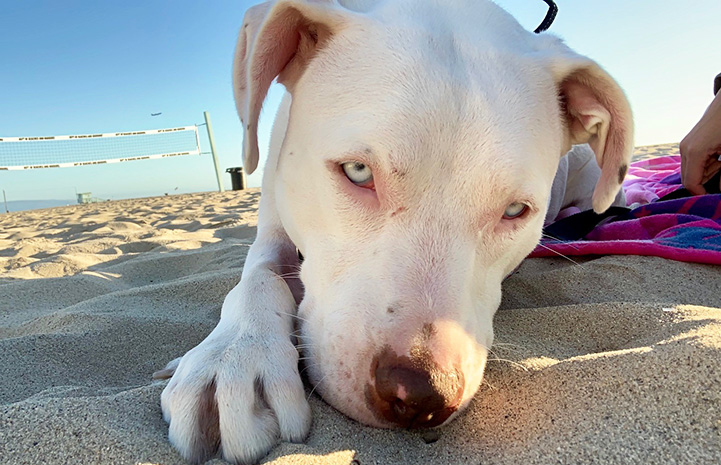