Image
Jude the dog is a happy and grateful dog. He is thrilled with all the toys and going on sleepovers with people.
By David Dickson

Not long ago, Jude the dog used to think there could be nothing better in the world than a fresh bag of toys to rummage through. "He’s obsessed with toys!" explains caregiver Liz Wood. Here’s a small example. Caregivers keep a large bag of rotating toys in the lobby area of Jude’s octagon. Ever the shrewd toy-gatherer, Jude knows good and well exactly where that bag is located.

Dog's delight at playing with toys 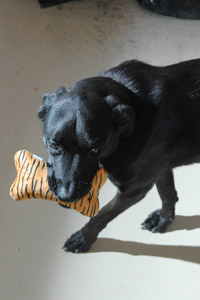 After Jude goes on his daily walks, on the way back into his play area he beelines straight for that bag, sifting through the goods until he finds a toy that strikes his fancy. Then he’s happy as can be with his new treasure. It’s hard not to fall in love with this dog. He’s so happy all the time, and so grateful for any attention he receives, whether that be a walk, a treat or a new shiny toy.

Sleepovers with people are even better

Recently, however, Jude has discovered something even better than a sackful of shiny new toys: sleepovers! "He loves people," Liz explains. And though he’s always been a smash hit with volunteers, Jude hasn’t been able to go on sleepovers until very recently. As it turns out, this lovable, constantly smiling dog is incontinent, which certainly adds a bit of a challenge to sleepovers.

However, the staffers who know and love Jude could just tell that he’d have an absolute blast going on sleepovers. They put their heads together and came up with a solution. Coordinating with the staffers down at the Best Friends cottages, caregivers put together a game plan for volunteers who don’t mind going through a little extra effort for a dog who certainly deserves a night out now and again.

By way of preparation, caregivers make sure to express Jude right before his big night out, so that’s not something the volunteers need to worry about. Caregivers have also created a basic list of instructions and a sleepover kit for his volunteers. The sleepover kit contains extra blankets, extra garbage bags, and a few cleaning tips, just in case. 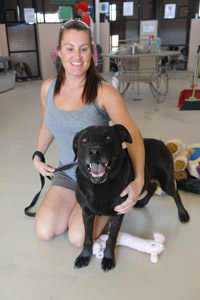 Yes, it does take a little more effort, but oh what a difference it makes in Jude’s day. The few sleepovers he’s been on so far have all been huge successes. "He comes back so happy in the morning," says Liz. Jude is great with kids, too. One family had a young son who decided to sleep on the floor with Jude, his arm curled over Jude during the night. Jude was in paradise!

So, for anybody who’s ever had to wonder whether a gift they’ve given was enjoyed or not, why not come over to Best Friends and take Jude for a sleepover? He’ll leave you no doubt whatsoever that, for one night at least, you’re his favorite person in the world!

Consider a donation gift to help animals like Jude.