Heartwarming story of a pit bull who will be reunited with his family after the chaos of Hurricane Harvey and the tragedies they've suffered this year.
By Kelli Harmon

Boy is more than a pet to his family. When Hurricane Harvey separated the sweet brown-and-white pit bull terrier from the Bonillas, it was devastating on a deeper level than just missing their dog. “He was my daughter’s dog,” says Zoey Bonilla. “She died this February in a tragic death, and Boy is all we have left of her.”

Zoey, her grandkids and Boy were still adjusting to life without Rose, Zoey’s daughter, when Hurricane Harvey came and took away their home, their car and everything else they own. Things can be replaced, but what upset them more than any material thing they lost was that the hurricane separated them from Boy. But there’s hope in their story, too.

Today Zoey and the kids are safe in Dallas, and Boy is safe in Houston with the Best Friends staff and volunteers who are taking care of him. As soon as Zoey secures a new home, the family will be reunited. Since everything fell apart, Zoey’s only goal has been to make sure they can be together again.

When a hurricane strikes

Boy was just a puppy two years ago when he became part of the Bonilla family. Though he lived with all of them, he was really Rose’s dog — constantly by her side, protecting her and loving her unconditionally. 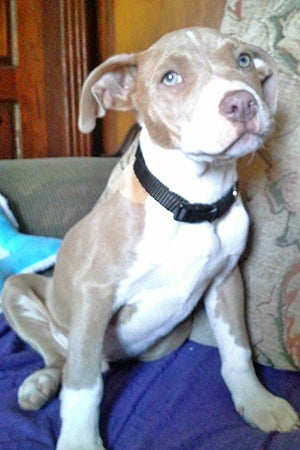 Rose died unexpectedly last February, leaving the kids and Boy with Zoey in her apartment in Vidor, Texas. They were still adjusting to life without Rose when Hurricane Harvey hit. That’s when things went from bad to worse for a family that had already suffered too much in a year.

Zoey says it rained for days. Though residents at the apartment were assured that the complex had never flooded before and that they’d all be fine, they were not. When water started filling the parking lot, Zoey moved her car to higher ground. When the water crept up to the building, neighbors banded together to try and stop it. 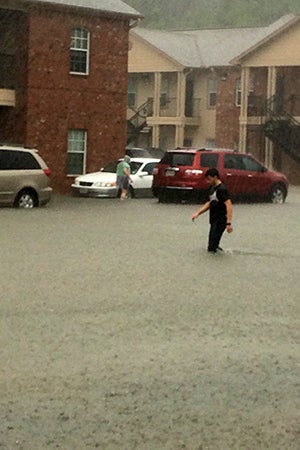 “We didn’t have sandbags, so we did anything we could to stop the water,” Zoey says. “When it was up to our ankles, I told the kids to go upstairs with the neighbors.”

People filled trash bags with towels, tied them shut and wedged them in their doorways. Soon water seeped into their ground-level apartment, and it kept coming.

Staying in the apartment with Boy, Zoey rushed to set valuables up away from the water and unplug everything. She sat on the couch to comfort Boy, who was afraid of the water. But the water never stopped. All the drains backed up, pushing sewage up from the tub and toilet.

“It was horrible,” Zoey says. “When the water was starting to get close to the electrical sockets, I told Boy, we’ve got to go.” She coaxed him to follow her, and he jumped off the couch and did a belly flop into the water-filled living room. The family took refuge with the neighbor upstairs, watching through the window as the water rose. 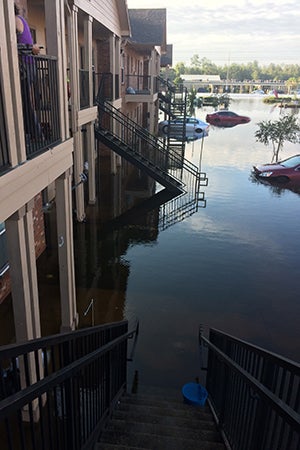 The next day they received the news that nearby rivers and creeks were overflowing, and that Vidor was expected to get four to five more feet of water. It was already waist-deep all around the apartment complex. “I had to get the kids out of there,” Zoey says.

Boy is left behind

People were already out rescuing in boats, and it wasn’t long before a boat came for them. But Boy had other ideas. “He just wouldn’t get in the boat,” says Zoey through tears. “We tried everything to get him in with us.” But Boy was terrified. He backed out of his collar and wouldn’t let them pick him up. Zoey was crying and the kids were crying, but a neighbor and friend assured them that Boy would be fine. So, in that moment of terrible pressure, with rescuers eager to get more people to safety before the water rose even higher, Zoey agreed.

Later that night, her phone rang. It was the neighbor, who told her that he had to leave too, but had put out a few days’ worth of food and water for Boy, and opened the windows so he wouldn’t get too hot. Knowing that Boy was alone and scared in a flooded building was too much to bear, so Zoey got to work.

She contacted her cousin, who was able to contact rescuers working in flooded areas. It took time for a rescuer to get to Boy, but he was OK. Four days after everyone he knew had disappeared, Boy was awakened by the sound of the door being kicked in by his rescuer. 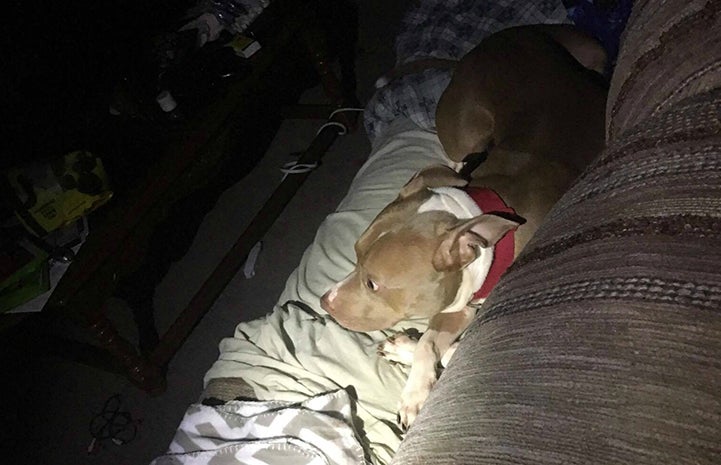 “He must have been ready to go because he went with the guy and didn’t put up a fuss at all,” Zoey says. “Boy jumped right up into the front seat of his air-conditioned truck.” In fact, his rescuer was so impressed with Boy, he said that if for any reason Zoey couldn’t take him back, he’d like to adopt him. But Zoey told him: “I’ve got to have my dog. He was my daughter’s.”

Boy joins other pets from the flood

Boy was taken to Conroe, Texas, nearly two hours away, where Best Friends had set up a rescue center. Meanwhile, Zoey and her grandkids, along with thousands of other people, were relocated to a shelter in Dallas that did not allow pets. But they soon learned that Boy was safe with Best Friends and was going to be fine. When Best Friends set up operations at the Pet Reunion Pavilion at NRG Arena in Houston, Boy was among the more than 500 dogs and cats arriving from the emergency shelter in Conroe and other areas. At the pavilion, which is a partnership between Best Friends Animal Society and Harris County Public Health, staff and volunteers care for dogs and cats and make every effort to reunite them with their families.

At the Pet Reunion Pavilion, Boy has a spacious kennel, his own toys and even a fan club. Though he was scared when he first arrived, volunteers have spent hours comforting him with lots of cuddling. 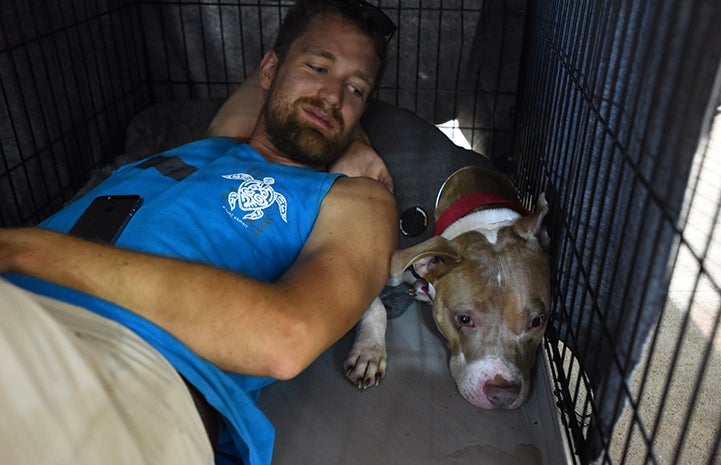 Now that he’s used to the routine, can count on the fact that he’ll receive good food and walks every day, and knows that everyone he meets is there to keep him healthy and happy, he’s not so scared anymore. His tail wags when people approach his area to feed, walk or sit with him.

Meanwhile, since their home and everything in it was lost, Zoey is working to secure a new home for all of them in Dallas, where they’ve decided to stay. Zoey says, “It’s been just an awful year. We’re ready to start fresh.”

The minute that new home is theirs, they’ll be ready for the day they’ve been waiting for since they were forced to leave Boy behind. “We can’t wait to have him back with us,” Zoey says. “I can’t even begin to tell you how much I appreciate what y’all are doing for Boy and us.”

Through it all, Zoey has managed to keep the kids and Boy safe. “This has been just a horrible experience. But we’re going to get through it,” she says.

Knowing that Boy is OK and looking forward to being reunited with him has given the family a tiny ray of hope, when once it seemed all hope was lost. 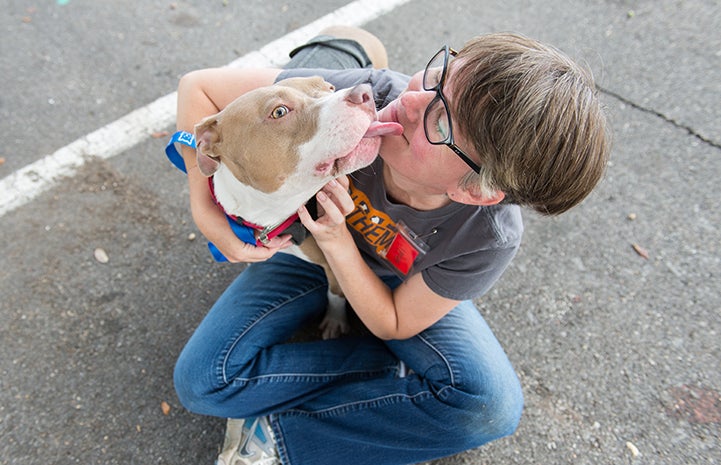