Image
Terrier dog, who had been hit by a car, had surgery, and then was adopted, pays it forward by saving his adoptive dad after his fall and concussion.
By Christelle L. Del Prete 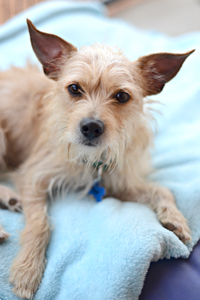 Darby’s life started out rather bleak. He’d been in and out of shelters in Los Angeles, and then ended up getting hit by a car. The adorable little terrier mix with giant ears and a wiry coat needed specialty surgery and cage rest, so Best Friends–Los Angeles staff transferred him to Best Friends Animal Sanctuary where he’d get expert care, and hopefully soon find his forever home. Little did anyone know that Darby would one day show he belongs in the same category as Lassie or Rin Tin Tin.

Terrier mix recovering after being hit by a car

Once he arrived at the Sanctuary in Utah, the little survivor quickly got the surgery and medical attention he needed at the Best Friends Animal Clinic, and it didn’t take long for him to bounce back. After a few weeks of crate rest, he was up and about.

Although he still had a little “hitch in his giddyup,” as Dogtown caregiver Haven Diaz affectionately puts it, Darby’s mobility issues weren’t severe and didn’t get in the way of his enjoyment of life. During the month he spent recuperating at the Sanctuary, Darby was friendly with people and got a lot of one-on-one socialization time with his caregivers and Dogtown volunteers. He even strode happily out of his building to greet the visitor tours that stopped by each day.

Adopted by a dog

Then, one day, it happened. Repeat volunteers Ray and Machelle Lyons were helping out at the Clubhouse, the area of Dogtown where Darby lived. Active world travelers and adventurers, Ray and Machelle had settled down to the point where they knew they could provide a great home for a dog. During that trip, they were on the lookout for a good match — so Haven introduced them to Darby.

As soon as Ray sat down in the kennel with the dog, “Darby walked straight over and adopted me,” says Ray. “We knew that was the way it was going to be.” But their love story doesn’t end there. 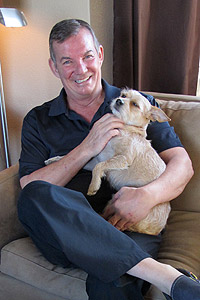 About two months after Darby went home to Colorado, there was severe weather with lots of snow and ice. Ray was outside with Darby, when he slipped and fell. When Machelle returned home from work that evening, she says, “Ray seemed dazed and confused. He didn't know what had happened to the last several hours and was surprised to see it was dark outside. He had no recollection of the day except that he took Darby out for a walk, and he woke up later with Darby licking him on the face and nose.”

The fall had apparently caused a concussion, and Ray didn’t even remember how he got home. “If Darby had not woken him up, he could have frozen to death,” Machelle says. But Ray does remember one other thing from that day — how concerned and worried Darby was about him. “He sat by my side for hours, and every time I almost fell asleep, Darby would wake me up. He’s a real rescue dog, in every sense.”

Though Darby was a little shy and not particularly confident when he first went home, being a hero seems to have helped with that. “He has made himself part of the family,” Ray says. “He's a real treat and treasure — just a joy.” And Ray and Machelle are just as thankful to have Darby as he is to have them. After all, this is one dog who knows how to pay it forward.