Dog reunited with family after hurricane

Image
Hound mix dog got out of his family's yard in Houston, Texas, as Hurricane Harvey hit, but he has now been reunited with his people.
By Kelli Harmon 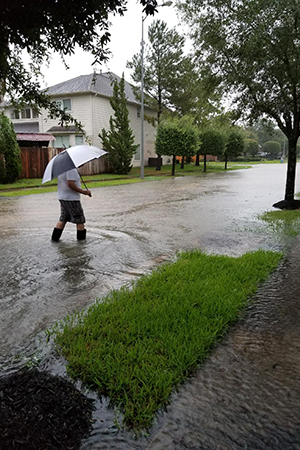 ​Marmaduke got out of his yard at the worst possible time. His Houston neighborhood was getting torrential rain, but his house wasn’t flooded yet, so his family let him out into the yard when he needed a potty break. When they called him back in, he didn’t come. He’d somehow gotten over the six-foot fence in the backyard and went on a freedom run just as floodwaters reached their neighborhood.

Marmaduke on the run

Diana Brown’s family had only recently rescued the goofy young hound mix, and he was quickly winning over their hearts. He’s not really house-trained yet and has a fondness for stealing Diana’s son’s food right out of his fingers, but they love him anyway.

So they went out to search for him, wading through the downpour. “We looked for him for hours,” says Diana. They started on foot and when they didn’t find him, got in the car to cover more ground, but they still didn’t find him. That’s when things went from bad to worse. Diana’s house began to flood and they had to get out, without Marmaduke.

Finding lost pets after a disaster

While the family got themselves and their other pets to safety, Marmaduke was somewhere in the area, probably bounding up to anyone willing to say hello to him. Eventually someone was able to catch him, and they brought him to a shelter nearby. He was safe there for a bit, but as animal shelters in the area flooded, they were evacuated, and animals were moved to off-site rescue centers ready to take them.

The big puppy was safe again, just separated from his family by a web of flooded streets. Meanwhile, Diana and the rest of the family were safe with a relative. As soon as they could, they went back into their neighborhood and plastered it with “lost dog” posters.

It wasn’t long before Diana got a call from someone who said they had found a dog, and they thought it could be Marmaduke. She went to the Montgomery County Animal Shelter and searched through a database of hundreds of animals all separated from their families, and that’s where she saw a familiar, goofy, brown-and-black striped face.

Soon she was on her way to pick him up, more than a week after he escaped his yard. There were more than a few tears shed when Diana arrived and finally got to hug her lost dog. But not from Marmaduke, who seems to think that the experience was a whole lot of fun, thanks to the dozens of nice new people he got to meet.

Finally, Diana loaded up Marmaduke into her car, along with donated dog food (his supply of food was destroyed in the flood). She’ll soon receive a voucher to have him neutered, something that was on her list of things to do until Hurricane Harvey arrived. Diana’s house was destroyed in the storm and her car flooded as they combed the streets looking for Marmaduke. “We had to get a new car,” she says. But she smiles as she says it, with Marmaduke bounding along at the end of his leash. Their family lost a lot, but not their goofy, gangly brindle pup. 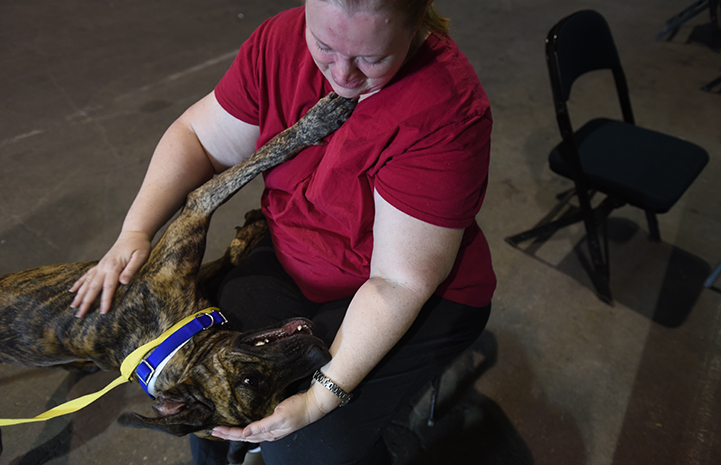 Photos by Molly Wald and courtesy of Diana-Brown