Dog from Texas puts the storms behind him

Dog survivor of Hurricane Harvey in Texas comes to Best Friends Animal Sanctuary for help, including treatment for demodectic mange and other issues.
By Christelle L. Del Prete

With his tiny nose twitching, Kirby peers out of the crate in his room at Dogtown. Though he doesn’t step out of his nest of blankets, he sticks his little bald head out far enough to take the treat gently from his caregiver’s hand. Dogtown caregiver Susie Blackburn has been sitting quietly in Kirby’s room, keeping him company and slowly coaxing him out of his shell.

Kirby, a little gray-and-white dog, has been through a lot. Susie is here to keep him company and to assure him that he is safe by becoming his friend. In the short time he’s been at Best Friends, Kirby already feels better and is getting braver. Whenever Susie leaves his room, he comes out of his crate and stands at the door of his room to ask for more attention.

Kirby was living with many other animals before Hurricane Harvey hit, and when that happened, he lost his home. Not only would the little dog need a new home, but he would also need a lot of medical care and TLC. He was in rough shape, was quite underweight and was missing much of his fur due to a case of demodectic mange.

Kirby gets a lift to the Sanctuary

All the other animals who arrived at the Pet Reunion Pavilion at the NRG Arena in Houston would have at least a 30-day stay. That would allow more time for their families to find them and take them home. But since nobody would be coming back for Kirby, there was no reason for him to stay in Texas. He would be better off and get the help he needed at the Sanctuary. It was Tierney Sain, a Dogtown team lead, who gave Kirby a lift to Kanab after finishing her two-week tour of duty in Texas caring for storm-displaced animals. 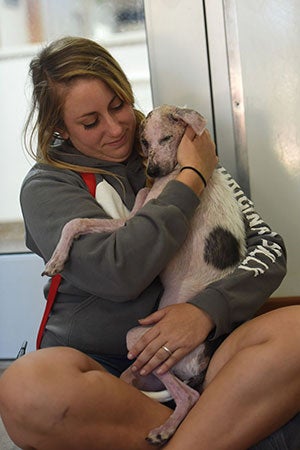 Kirby is a shy little guy, but during the long drive from Houston to Kanab he got comfortable with Tierney and began to show more of his personality. “He does come out of his shell when he is comfortable,” Tierney says. “He cuddled with me and followed me around everywhere in the hotel room where we stopped for the night.”

A cozy, quiet room was already set up and waiting for him the following night when he arrived at Dogtown, so that he could rest and settle in.

Kirby received good news following a checkup from a Best Friends vet. While he does have mange, it’s the kind that’s generally isn’t contagious to other dogs. That means after a brief quarantine (to make sure he doesn’t have any upper respiratory illnesses), he’ll be able to move to another part of Dogtown and start making both human and doggie friends.

Had Kirby not come in to the Best Friends Rescue and Reunite Center, his future would have been uncertain. But now, at only a year and a half old, Kirby has his second chance. And he’s ready to put the storms of his past behind him, to heal and to find his forever home.