By way of our Community Training Partners (CTP) program, we'd like to share some happy endings with you.

When 82-year-old widow Scheherazade Kleindiest of New Jersey lost her husband of 53 years, she decided it was time to bring a dog into her life. She found Shahara (pictured above with Scheherazade), a German shepherd puppy with whom she fell instantly in love. With Shahara in the house, Scheherazade felt so much happier. The loneliness was gone. Her friends, however, worried that a rambunctious young dog such as Shahara would be hard on the furniture.

Scheherazade knew exactly how to answer her friends when they raised such concerns. "My husband kissed me good morning and good night every day for 53 years. The dog does the same. The furniture never has. If anything goes, it will be the furniture." Now that’s keeping your priorities straight! Shahara was there to stay — no ifs, ands or buts.

There was, however, a minor setback early on. Shahara developed a habit of pulling whenever she saw rabbits, squirrels, and other small critters. After all, she is a typical energetic young dog. How could she ignore something so exciting? Shahara became a bit difficult to handle in such situations.

Scheherazade never once considered getting rid of Shahara -- she was part of the family. She did, however, need help working through such behavior with Shahara.

One obstacle Scheherazade never expected to encounter came from the very people she turned to for guidance. Two separate dog trainers Scheherazade consulted with told her she’d be better off getting rid of Shahara. She couldn’t believe their attitudes. Thank goodness she ended up finding Sam Wike, community training partner with Best Friends! Sam visited with Scheherazade and Shahara at her home. He helped them with basic training such as sit, stay, and other good manners. The training, which is still ongoing today, has made a huge difference. "He’s still helping me immeasurably," said Scheherazade about Sam’s training efforts. Shahara is much more responsive and displays terrific manners.

As for Sam, he couldn’t be more thrilled with the results. "She’s happy, her dog is happy, but most importantly, they’re very happy together," said Sam. Scheherazade and Shahara are in it for the long haul, thanks to the CTP program. And as an added bonus, even the furniture is holding up well!

Another woman from New Jersey also found comfort in the companionship of her new dog. Lynn McClaren, also a grieving widow, lost her mother and then her husband within a two-month time frame. Her mother had been her best friend in the world. After such a challenging double loss, Lynn explains that she slid into a very dark, lonely place. She couldn’t imagine loving again, and even began to pull back from friends and family.

"The void in my life was overwhelming," said Lynn. 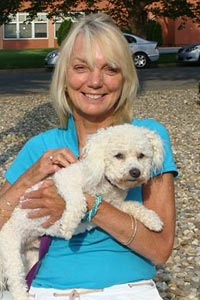 Then along came Cooper. Lynn’s granddaughter talked her into considering adopting a dog. When Lynn took one look at Cooper, a little fluff-ball of a bichon frise, her heart melted. "His face was so precious," she said. "He looked so lost." She felt drawn to him instantly. She decided to bring him home and into her life.

Two weeks later, though, she was afraid she’d gotten in over her head. Cooper was chock full of puppy energy — a characteristic she now refers to lovingly as his Dennis the Menace personality — and had taken up several bad habits, including persistent marking around the home. Lynn was admittedly in an emotionally tough place at the time. "I’ve taken on too much," she feared after those first couple weeks.

Lucky for Lynn, and Cooper, she made a phone call for help that ultimately led her to Sam Wike. Sam began visiting with Lynn and Cooper at her home. Before long, Cooper was a different dog entirely. He started obeying basic commands, he did his bathroom business outside, and he even found a terrific outlet for that never-ending puppy energy.

Sam works at a fabulous pet resort called the Purr’n Pooch. Cooper began going to the pet resort several times a week, which allowed him to burn through all that restless energy in a productive way. Though Lynn wasn’t able to afford frequent visits to the Purr’n Pooch, the Best Friends CTP program helped sponsor the visits. Those getaway sessions make all the difference for him. Cooper is so much happier, and so is Lynn.

Nowadays Lynn cannot imagine life without her best pal. "Cooper filled a spot that is just amazing," Lynn said. Her family teases her that she now babies him just like one of her own children. "How can I not?" she asks. "He brought me back to the land of the living."

As it happens, that road ended up being a two-way street. Lynn was out walking Cooper one day when a stranger’s dog attacked and wounded Cooper severely. She rushed him to the vet, where the outlook was not good. Cooper’s wounds and subsequent infections could well have proven fatal.

Lynn refused to let him go without a fight. She and her sister Donna nursed him back to health round the clock for weeks, along with simultaneous vet care. In time, Cooper made a full recovery, with no permanent physical or psychological damage from the attack. Vets told Lynn Cooper never could have made it without her constant care during those critical weeks.

Lynn is so grateful to Sam and the CTP program for helping her figure out how to enjoy and work with Cooper. "Sam made it simpler," she explains. She and Cooper have become the ultimate inseparable pair these days. As she plans her Christmas visits for the holiday season, Lynn makes it clear to all on her visiting list that Cooper will be in attendance as well. "Either they accept the h of us, or I don’t come!"

There are many more inspiring success stories through the CTP program. When you’re dealing with such powerful happy endings, their impact has a tendency to spread over time.

Anybody remember Zero? He was the beloved family pet who jumped a back yard wall — Zero had separation anxiety — and who was then sentenced to death by a judge. 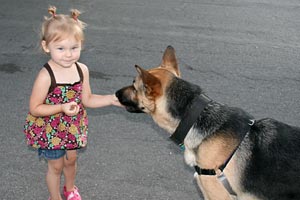 His story has a happy ending, as Best Friends and the CTP program were able to intervene and help the family train Zero to curb any less-than-desirable behaviors. Zero was always a good dog, mind you, just skittish. With training, he became such a model citizen he began making public appearances accepting treats from children at the bus stop. But, that’s only the beginning of the story.

Zero’s family, James and Feliz Riley of Brigham City, Utah, were so thankful for the help they received in keeping Zero with the family that they wanted to pay it forward. Feliz thought she would have time to foster and help prepare an animal for adoption.

She discussed possibilities with Best Friends community training partner Skye Poitras. Skye is the community training partner who worked with Feliz and family originally. Skye had the perfect recommendation for Feliz: Ebony, a black Lab mix in a shelter who was dangerously close to being euthanized. Feliz decided she, along with the rest of her family, was up for the task. They took Ebony home from the shelter, which almost certainly saved her life. Ebony’s time was very nearly up.

They brought her home and set straight to work with training.

Ebony was quite the hyper young dog and had a tendency to jump up and beg for food at every opportunity. Using the skills they acquired through the CTP program with Zero, Feliz and family taught Ebony basic obedience such as how to sit and stay. They taught her how to wait at the edge of the kitchen when the family ate meals. They taught her to lie comfortably and stay, even with rambunctious kids climbing all over her (by using treats, they made it a pleasant and nonthreatening process). They taught her how to eat out of the kids' hands, and how not to become upset if they approached her food bowl. 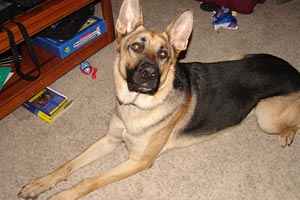 The Riley family wanted to make sure Ebony wouldn’t freak out if she ended up in a home with other high-energy kids. As a quick aside, Ebony and Zero, who is still doing great, had a splendid time playing together. Zero wanted to be a good example too!

In the end, the training paid off. Ebony found a wonderful forever home a couple of months later thanks to all the impressive social skills Feliz and family helped her learn. Another life saved. Now that’s a happy ending to be thankful for.

Photos courtesy of the dogs' families