Dog was starving no matter how much she ate, but now she’s healthy and happy

The shy yellow dog first showed up more than a year and a half ago, because she was hungry. In rural Arizona, a group of kind and caring people do their best to help animals in need through an all-volunteer organization called Tuba City Humane Society. That’s how a volunteer noticed that Zora was showing up regularly to eat, but she was getting skinnier by the week. She was also afraid of people, so helping her wasn’t easy.

That’s how she earned her nickname: Slim Chance. As she got thinner and thinner, the volunteer wanted to help her, but based on her physical condition, he didn’t have a lot of hope. It took some time, but the local community rallied behind Zora and was able to catch her in a humane trap and take her to the local veterinarian for some much-needed care. 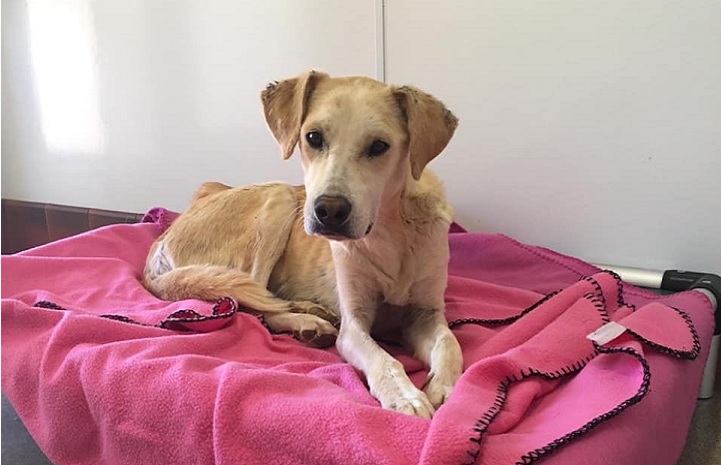 Over the course of five weeks, the vet tried to find a cause for Zora’s emaciation (while also treating her for a tick-borne disease), but had no luck. From there, Zora was brought to Best Friends Animal Sanctuary with the hope that the medical team could help her.

Zora arrived at the Sanctuary frail and thin, and she spent most of her time snuggled up and sleeping on a soft, cozy bed. She seemed exhausted. Caregivers began by feeding her five meals a day to help her gain weight. They also noticed right away that Zora seemed to have lots of tummy trouble.

When dogs first arrive at Dogtown, one of the first orders of business is a thorough veterinary exam, vaccines and a microchip. If dogs are healthy, the clinic schedules spay/neuter surgery, but in this case the vet determined that Zora was too emaciated for both surgery and her vaccinations. The clinic ran some blood tests and started her on a supplement that was mixed into her meals to hopefully aid digestion.

The vets later discovered that one of Zora’s blood tests revealed numbers indicative of exocrine pancreatic insufficiency (EPI), a disease where the pancreas does not produce proper enzymes to digest food, rendering the body incapable of absorbing enough nutrition. That’s why — even though she could eat and eat — she still lost weight.

Luckily, EPI is treatable. All Zora needed was enzymatic powder in every meal and she started to gain weight right away. Her tummy troubles also got better and she had more energy.

Zora was still too frightened to allow people to pet her, but instead of bolting outside when caregivers entered her room to do chores, she would stay relaxed on her bed. This was a major improvement for a shy dog. Soon caregivers began hand-feeding Zora, a key step in building trust.

Over the course of six weeks, Zora gained 12 pounds and the veterinary team determined she was healthy enough for her vaccines and spay surgery. Zora healed well after surgery and soon was ready to move into a group with other dogs. Caregivers had high hopes that living with canine friends would help Zora gain confidence and overcome her shyness.

In Dogtown, the staff often pairs shy dogs with confident, outgoing dogs so that the shy dogs can learn by watching their friends who love people. This strategy worked beautifully for Zora, who moved in with four other dogs. With dedication and patience, caregivers got Zora comfortable enough to be leashed up and go for her first walks on the trails.

Zora watched her dog friends bound into cars for rides, and she wanted to try it, too. And soon, caregivers noticed her out in the fenced yard playing with a tennis ball and acting like a puppy. She had made a complete transformation from the frail, emaciated dog living on her own outdoors. Now all she needed was a home.

Throughout Zora’s time in Dogtown, the caregivers remained in contact with the group of citizens who initially rescued her. Caregivers sent regular photo and video updates, and one person posted the updates on the community Facebook group page.

As luck would have it, a couple living near Best Friends Animal Sanctuary saw the Facebook post from Tuba City Humane Society while looking for a dog to adopt. They read the update on Zora’s transformation and decided they wanted to meet her.

Zora was at first nervous at the meeting, but the interested couple understood that Zora would need time and patience to feel comfortable with them. The following week they introduced Zora to their dogs and, of course, the dogs hit it off. Zora is much more comfortable around dogs than she is with people, so it was easy for her to acquaint herself with new canine company.

That helped the family make a decision to adopt Zora and bring her home. Since going home, Zora’s new family reports that she’s settling in well and loving her new canine siblings. After a difficult start to life, Zora got everything a dog could ever want, just in time for the holidays.

Donate to help dreams come true for pets like Zora