The dogs at the Sanctuary have lost a true hero. Don Bain, Dogtown volunteer coordinator and puppy socialization class instructor, passed away on October 10. He’d been battling health problems for some time, not that you’d have known it to meet him. 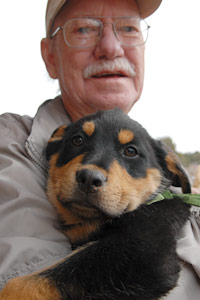 Don was the happiest, most charismatic man around. He will be sorely missed. What he accomplished in his relatively short time at Best Friends goes to show how much difference a single person can make when following something he believes in.

Don came to visit Best Friends for the first time in the summer of 2005 with his wife, Terry. At the time, they were retired and staying in an RV at nearby Bryce Canyon National Park. Don was so impressed with the Sanctuary he decided he wanted to be part of it and would take any job available. At that time, there was a grounds keeping position listed. He applied for and received the job.

Before long, however, he ended up at his true calling: working with the puppies at Best Friends. For those of you who have never witnessed a white-haired, soft-spoken, grandfatherly figure transform into a five-year-old on the spot, well, you may have lost your chance forever. Because they don’t make them like Don any more.

"He really made the program work," says Best Friends dog manager Michelle Besmehn about the puppy socialization class. The puppy socialization class has always been about instilling life skills and confidence in the puppies, not so much on learning fancy tricks. The goal is to send out fearless puppies prepared for anything because they’ve already experienced it one way or another. Don helped start the classes while still a groundskeeper and then continued after transferring to become a volunteer coordinator.

One confidence skill Don wanted to make sure all puppies had was that of being around an exuberant five-year-old. Young children don’t always attend the puppy classes, but Don was always happy to improvise. Don would demonstrate to the rest of the class how to imitate true childlike behavior. "Mommy!" he’d scream, jumping up and down. "Mommy! Look! A puppy!" The puppies got used to his antics quickly enough, but the visitors never failed to chuckle. They just never saw it coming.

"He brought such nice energy to what he did," adds Michelle. Yes, the child replica routine was certainly funny, but also very useful. It helped those pups prepare for the outside world. And make no mistake, this whole class truly helped them prepare. The return rates from adopted puppies dropped drastically ever since the beginning of his class.

Don always had a way of letting the visitors know how much their time was appreciated. "This class was only 45 minutes long," he’d say, "But you might have just saved a life." Don would do anything he could to give these pups a better chance at a happy ever after.

At Best Friends, his childlike enthusiasm never faded. "The puppy class never got old for him," explains Angela Rovetto, a Best Friends staffer who volunteered in the puppy class several years ago, before she came to work at the Sanctuary. She’ll never forget his kindness and encouragement from that first day when she was a visitor, or how it never faded over time. She knew Don did everything possible to help the puppies not only find homes, but stay in them forever. "He made it his mission," she adds.

A banker and a musician

Don was a man of hidden talents. In addition to his previous career as a banker, he once played drums professionally, performing alongside such country music legends as Leon McAuliffe, Patsy Cline, Willie Nelson, and Johnny Cash. Again, you wouldn’t have guessed it to meet him. And you certainly wouldn’t have found out easily even after knowing him for some time. He rarely spoke about himself. To Don, it was all about the animals.

Without downplaying the impact he had on the animals in his care, Don also had a tremendous effect on the people who came to know him. Whether people knew him as a friend and colleague for years, or if they only had a single puppy class with him, they all felt a positive impact.

A friend to remember

In the five years Don worked at Best Friends, he made friends wherever he turned. Each Christmas he invited all the staff members at Dogtown to his home for a party. He and his wife Terry were always stopping in at other gatherings as well. "He loved family, he loved friends, he loved animals, he loved everybody," explains Best Friends puppy caregiver Analia Gutierrez. "We all miss him so much."

To anyone who would like to remember Don and honor his memory, please consider volunteering at a local shelter or rescue group to help socialize the puppies. We think Don would have liked that.