Image
Sick pregnant cat has lifesaving surgery at Best Friends Los Angeles. Though her kittens were stillborn, she survived.
By Nicole Hamilton

No matter how bad things get, it’s sure to be better up ahead — especially when you’ve got good friends to help you. Nikki, a tiny cat with enormous eyes, reminds Deannette Bender of this every day. You see, Nikki knows a thing or two about staying strong during tough times. Today, she is a healthy, happy cat, who is content sleeping the day away on Dee’s lap. But not too long ago, she had to summon up all her strength to beat a serious illness.

Coming together to save a cat’s life 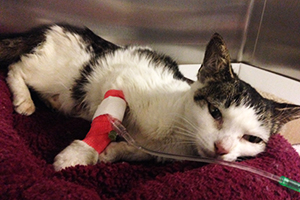 Nikki, known then as Oklahoma, arrived at a Los Angeles Animal Services shelter as a stray. To compound her problems, she was also pregnant at the time and later endured a very difficult labor at the shelter before being taken in by Best Friends. Once she arrived at the Best Friends Pet Adoption and Spay/Neuter Center, the plan was to let her heal, become better socialized, and help her find a forever home. But it wasn’t that easy.

As soon as she arrived at the center, the admissions team knew Oklahoma was in bad shape. She didn’t want to eat, was severely dehydrated, and was likely suffering from an infection that started after giving birth. Staff quickly got the sick cat to Dr. Nicole Petschauer and the rest of the Best Friends medical team at the center’s clinic so the cat could receive emergency treatment.

“For two days we administered fluids and antibiotics to try to get her stable,” said Dr. Nicole. “When she didn’t improve by the third day, we decided to perform surgery. And we weren’t sure she’d make it. ”

During the procedure, Dr. Nicole was able to find the cause of Oklahoma’s severe, life-threatening infection. She had sustained a ruptured uterus during delivery and the infection was so bad that it had spread to several internal organs and her abdomen.

Luckily, surgery stopped the cause of the infection, but Oklahoma wasn’t yet out of the woods. The real test would be how she recovered from the surgical procedures and whether or not the post-surgical treatment would work.

The infection had left Oklahoma with almost no white blood cells, which meant that her body had no way of fighting new infections. The Best Friends medical team and cat caregivers had to make sure Oklahoma’s environment stayed completely sterile, while continuing to deliver round-the-clock post-op care, which included feeding her through a tube. In fact, Oklahoma’s 24/7 team took turns feeding her four to five times a day and administering medication about every hour.

“The surgery was actually the easy part,” said Dr. Nicole. “It was the hours every day that the cat caregivers and medical staff spent feeding and medicating her that really made the difference in her life. I feel privileged to work with this staff that helped Oklahoma not only to heal physically, but also gave her the emotional support to heal mentally.”

After about two weeks, the constant care paid off. Oklahoma was healthy again, and finally was ready to find her forever home.

“The shelter thought that she was unsocialized,” said Dr. Nicole. “But that wasn’t the case. She was sick and scared, and she would have died if she didn’t get immediate care. But she’s a fighter. And she pulled through because she’s tough.”

The perfect adopter for a cat who needs rest and love

While Oklahoma was recovering from major surgery, Dee Bender was on a healing journey of her own. She had recently lost her beloved cat KC (which stands for Krazy Cat). After reading about Best Friends in the Los Angeles Times, she decided to pay the center a visit. She was determined to find a cat that could raise her spirits, just like KC did.

Dee moved from room to room looking at cats until she arrived at the last one. It was there that she spotted a cat with enormous eyes and a tiny body, sitting in the corner of her enclosure. It was Oklahoma.

“I knew from the moment I saw her that she was coming home with me. There was no question,” Dee said. And so she began to coax Oklahoma away from the back of her cage. Eventually, Oklahoma let Dee pet and hold her. And just like that, Dee’s broken heart was on the mend.

A healthy cat gets a new name, new life 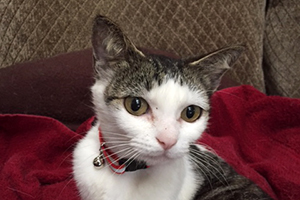 While there was no question that Dee would bring Oklahoma home, she was concerned about her weight. The tiny kitty barely weighed five pounds and Dee was worried that Oklahoma was too frail to take home.

She shared her concerns with Miriam Giordano, an adoption specialist who is used to getting questions about pets who may have special needs. “One of the most special things about Best Friends is that we don’t just take in healthy pets, but also those that need a little help and a second chance,” says Miriam.

In this case, Miriam summoned Dr. Nicole, who told Dee all about Oklahoma’s surgery and post-surgical care. She assured Dee that the cat she was adopting had beaten the odds and was ready for her second chance in her forever home.

It was the team’s commitment to help all homeless pets, coupled with the care that everyone gave Oklahoma that inspired Dee to adopt her and change her name to Nikki— in honor of the doctor and team who saved her cat’s life.

“Nikki and I are meant to be together. I just know it,” says Dee. “Today, she’s riding high in a five-star resort, and she teaches me that every day is special. Best Friends didn’t give up on Nikki. I won’t, either.”