Image
Best Friends intern enjoys her time at the Sanctuary helping horses. The experience reaffirms her love of the human-horse bond.
By Christelle L. Del Prete 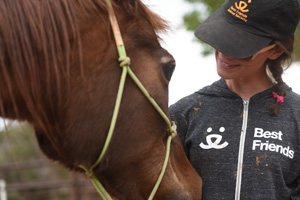 Alex DiGiacomo has loved horses since she was a little girl, and when a recent move landed her farther away from them than she’d ever been, she realized how much she missed being around horses. So she decided to do something about it. What better way to reconnect than spending four months caring for them and taking her horsemanship to a new level at Best Friends?

Alex was excited to sign on to help out in Horse Haven, the area at Best Friends where horses, mules, goats, sheep and other barnyard friends live. Best Friends also offers internships in other animal care areas, but Alex was committed to helping out and learning what she could from Horse Haven staff. During her time at the Sanctuary, she ended up getting so much more than information (though she got a lot of that, too).

Alex was happy to lend a hand wherever she was needed. Just as she hoped, the experience allowed her to spend lots of time with her favorite animals, whether it was feeding them, moving them between pastures, or shadowing Horse Haven trainers as they worked with the Sanctuary’s equine residents.

But Alex’s greatest teacher during the internship was a horse named Reflection. “She could be a little frightened and flighty with people,” Alex says. “She’s the kind of horse who needs reassurance, repetition and consistency.” Horse Haven staff paired up Alex and Reflection to see how the two of them would get along, and Alex accepted the challenge head-on.

Testing the bond with one horse

Every day, Alex spent time with Reflection, building a trusting relationship. “Reflection feels less frightened when people are low to the ground,” Alex says. “So I’d sit down to make her more comfortable whenever she came close to me.” Soon, Reflection was coming up to greet Alex instead of running away.

Reflection needs people who are kind leaders. Once Horse Haven trainers taught Alex how to take on that role, she started to see a change in Reflection. Like the day Alex walked her down to the creek. Refection was wary at first. “But when I finally jumped in, Reflection jumped in right beside me,” Alex says. The moment showed that Reflection trusted Alex enough to try something new, even though it was scary. It was a turning point for both of them.

A breakthrough with a horse

As Alex helped Reflection the horse gain confidence in encountering new people and things, Reflection helped Alex begin learning Parelli Natural Horsemanship, the training program used with all of the horses in Horse Haven. And Reflection helped Alex learn something about herself, too. When she was 13, she befriended a horse named Chick, who’d been abused. At the time, Alex was struggling in school and having a hard time meeting new people.

“Chick and I clicked,” she explains, “as if we were cut from the same cloth.” The two enjoyed an incredibly close bond until Chick passed away eight years ago. “I thought I’d never have a relationship like that with a horse again,” Alex says, “until I met Reflection. She showed me I could build another great relationship with a horse, which was an incredible breakthrough for me.” 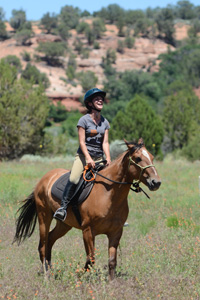 When her four months at Best Friends came to an end, Alex says it was “as bittersweet as the ending of a really good book or movie.” But she’d learned a whole new way to be around horses, and had new skills to bring home that will surely stay with her until she meets her next equine partner. “The internship in Horse Haven completely changed how I view horses and helped me see how good the human-horse relationship can be,” Alex says.

And it changed how she felt about her own abilities, as well as how far horses can come, even when they start out afraid and uncertain. Alex says, “The internship was empowering because I realized how much I’m capable of, and how much the animals are capable of as well.”

Find out more about internships at Best Friends.