Image
Shy pittie mix gains confidence after animal rescue volunteer starts spending time with her. Pit bull has now been adopted and is an Instagram star.
By Nicole Hamilton

When Roomba first came to the Best Friends NKLA Pet Adoption Center from Los Angeles Animal Services, she needed quite a bit of help.

Though she was safe once she arrived, and caregivers and volunteers were eager to find her a great new home, Roomba was a bundle of nervous energy. She would bark at the dogs around her or would stay in the back of her kennel, making it difficult for adopters to get to know her. And since many adopters are looking to make an instant connection with a dog, it meant finding a home for her was not easy. But volunteer Lori Winslow had a soft spot for the dog who was hard to get to know.

Lori looked beyond Roomba’s scared exterior and saw who she really is: a fun-loving, easygoing dog with the talent to make everyone smile. From the moment Lori met her, she was determined to help Roomba feel more relaxed and self-assured so she could find the home she deserved. It wasn’t long before that determination, along with a heart-covered sweater and a TV appearance, paid off to help Roomba find her new home.

Learn how we’re working to make L.A. a no-kill city 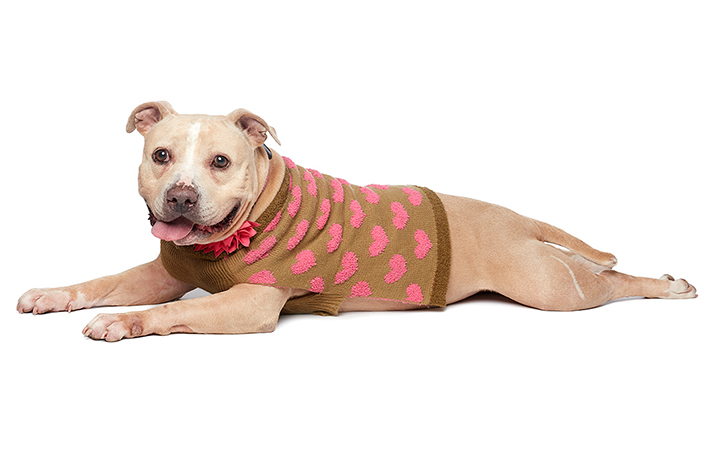 Looking past a dog’s fear

When Roomba first came to the center, she made it clear that she loves both belly rubs and acting a little silly. Like most of us, Roomba enjoys a good snack (or several of them). She inhales her food as fast as she can, which is how she got her name. She can also be a little stubborn. Roomba likes to learn, but prefers to do it on her own time.

New surroundings scared her and Roomba got that point across to her dog neighbors by barking at them ― a lot. In fact, she barked so much that she’d tire herself out and retreat to the back of her kennel for long periods of time. Volunteers were tentative about walking her and were worried they’d disrupt her alone time. And when adopters came to meet her, Roomba usually appeared shy and aloof.

Gradually though, things began to change. After all, sometimes all it takes for life to get better is someone who can see your full potential. 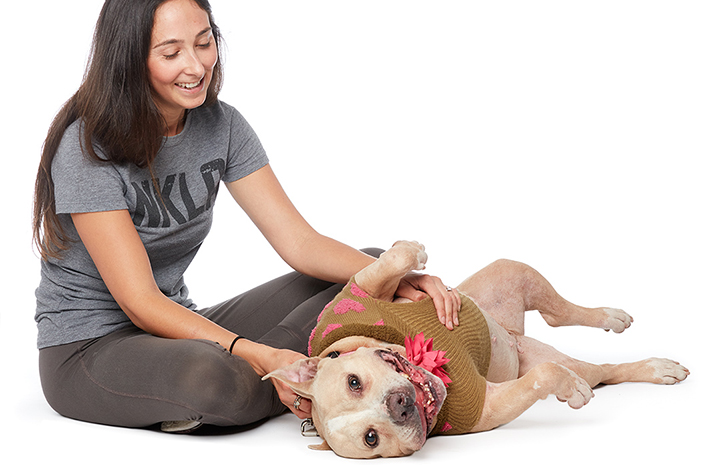 Sensing that Roomba is a free spirit who likes to feel the wind in her ears, Lori started taking Roomba for drives ― sometimes with no clear destination and just so Roomba could relax in the car.

Lori’s dedication made a big difference in Roomba’s life, says Katie O’Shaughnessy, lead pet caregiver at the NKLA Pet Adoption Center. “Once Roomba started spending time with Lori, she became much more lady-like in her kennel and was more inclined to sit at the front door and greet people walking by. And more volunteers got to know Roomba, which gave her self-confidence a boost.”

Lori began dressing Roomba in sweaters, making her quite the fashion maven at the center, and on Halloween, Roomba even allowed Lori to dress her up as a frog. The photos of Roomba in costume were an instant hit on Facebook and Instagram.

Then one day Best Friends staff were preparing to appear on a local Fox television affiliate to promote an adoption event. Lori petitioned staff to let Roomba join them. She thought her favorite dog was ready, and they agreed.

Roomba made her on-air debut with the poise and grace of a movie star. The anchor even asked her where she got her heart-filled sweater. 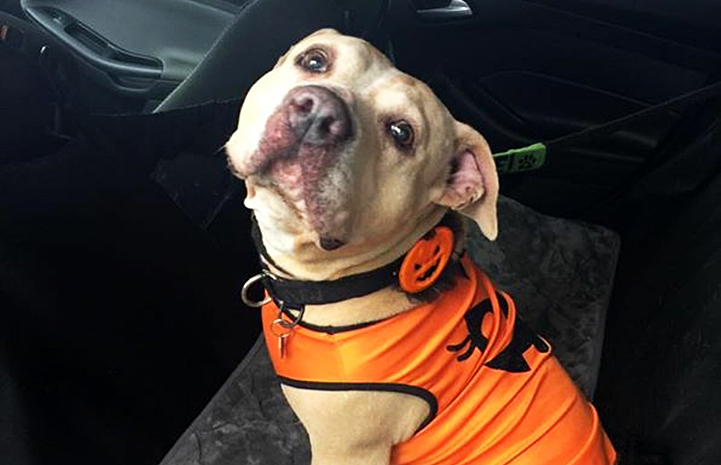 Roomba was still at the NKLA center near the end of the special adoption event. It looked as though this pit bull terrier would need to wait a little longer to be adopted, but then Amy Truong walked in. She was looking for a dog she’d seen on television wearing a sweater with hearts: Roomba.

Everyone at the center had a good feeling about what was about to happen. To make sure things went well when Roomba and Amy met, Lori handed Amy some treats ― a tried-and-true way to get Roomba’s attention. Amy held out her hand with the treats to Roomba, who gladly accepted them. Then, Roomba rolled on her back for belly rubs. It was her way of saying she gladly accepted Amy’s love, too.

Today, Roomba is proving to be quite a hit on Instagram, where Amy posts photos capturing that quirky, completely unique personality that Lori also fell in love with.

“I truly believe that Lori brought out the goofball character we all grew to know and eventually sent home,” says Katie.

Like a true Angelino, Roomba hates the rain. In fact, Amy’s boyfriend has to carry Roomba to the grass when it rains because she doesn’t like walking in the water. And she’s still stubborn. At the park, she’ll join Amy on her runs until about the halfway mark. Then, she’ll park herself next to an SUV (any SUV), hoping to catch a ride home to rest.

“I miss Roomba,” says Lori, who kept Roomba’s kennel card as a reminder of her special dog. “But I am so happy she finally has the life she deserves.” 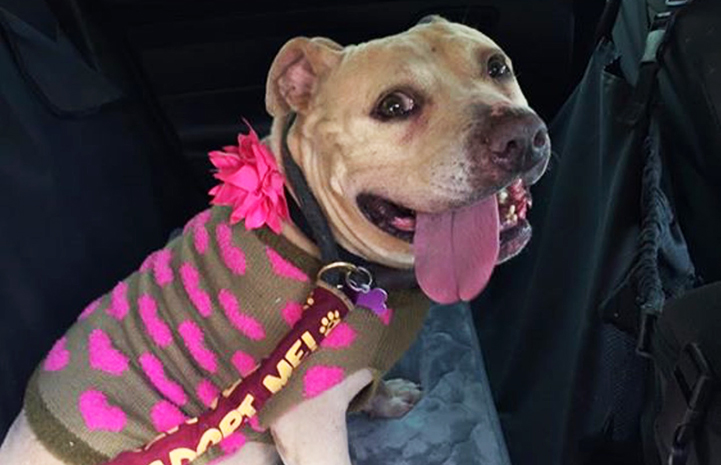