Family adopts the sweetest underdog ever 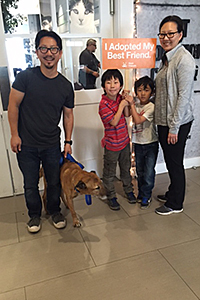 What better time than New Year’s to give a dog the new home she deserves? That’s what Katherine Ku, her husband Nick Chun and their two sons, Noah and Luca, thought when they made their way to Best Friends’ NKLA Pet Adoption Center on New Year’s Day. They wanted to meet dogs in the hope that one of them would make the perfect addition to their family. Now, a few months later, a very special dog is living a better life than she ever could have hoped for.

The family met a lot of great dogs that day, but one in particular named Coco, a three-legged, eight-year-old Labrador retriever mix, made an immediate impression on them. They loved her resilient spirit and kind, relaxed personality, and how she sat calmly as Luca and Noah showered her with hugs.

At the end of the visit that day, they decided to go home and think things through before making the big decision. After narrowing their choices down to a few dogs, they returned to the center the following day to spend more time getting to know them. One of those dogs was Coco, whose journey to Best Friends had been a bumpy one. But Coco’s best days were still ahead of her.

Coco came to Best Friends by way of Los Angeles Animal Services where she was brought in as a stray. It was soon clear that she was experiencing pain when while walking. Because she needed the kind of medical attention that went beyond what was possible at the shelter, Best Friends took her in at the Best Friends Pet Adoption and Spay/Neuter Center in Los Angeles, where vets got to work on finding out why Coco was feeling so bad.

A biopsy of a growth in Coco’s front leg revealed that she had appendicular osteosarcoma ― a terminal, aggressive type of bone cancer. To increase Coco’s chances of living longer, Best Friends vets amputated her leg where the cancer was found.

Coco bounded back quickly after surgery and showed everyone that she’s not only kind and sweet, but that she also has a fighting spirit. Soon after the surgery, she moved across town to the NKLA Pet Adoption Center, where staff members hoped to match her up with just the right family looking for a senior, three-legged dog who might not live very long.

The perfect home for a special Labrador retriever mix

Kristy Rios, adoptions specialist at the NKLA Pet Adoption Center, was there on the second day when Katherine came back with her family. And when they asked to see Coco again, Kristy’s heart skipped a beat. She was excited for Coco, but concerned about whether the family was aware that Coco’s leg was amputated because of the cancer.

The family understood that, and Kristy left them alone to be with Coco to think if over. Time passed ― a lot of time, in fact. Occasionally, Katherine stepped out to ask Kristy detailed questions about Coco’s health and daily routine. The more questions Katherine asked the more Kristy understood that the moment Coco had been waiting for ― the moment she deserved ― could finally be happening.

Meanwhile, in the meet and greet room, Katherine and Nick discussed Coco’s health with their sons. “No one promises us anything,” Katherine reminded them. But her son Noah responded: “I promise to love her, even if it’s for a little while.”

And with that, talk turned to how to make Coco comfortable and happy, and when Noah said he planned on making her an artificial leg, that’s when it became clear that Coco was finally going home. And she became the first pet adopted from the NKLA Center in 2017.

“We fell in love with her,” says Katherine. “She’s a life force.” 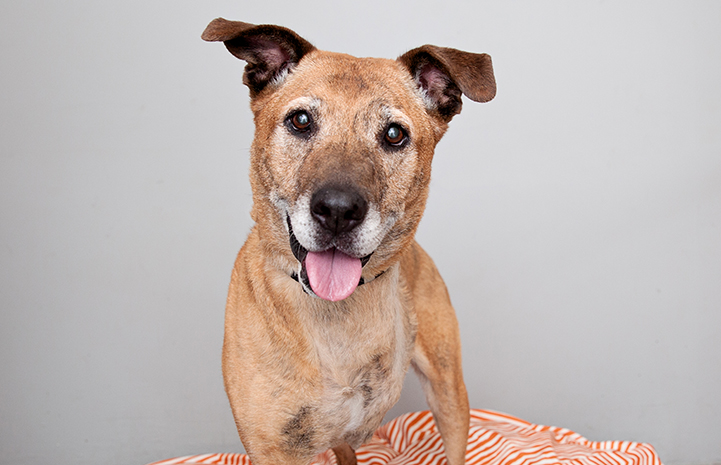 Coco is a reminder to be open to love 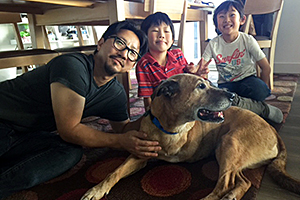 Today, nothing stops Coco from enjoying her life. She loves hiking with her family and meeting neighbors on the cul de sac where she lives. “Coco has a way of drawing people in. She loves everyone,” says Katherine. “She always wants to meet people and make friends, so she has a real fan club now.”

Although Coco is missing a leg, she is able to get around just fine.

“Coco is teaching us to cherish the moments we have each day,” says Katherine. “She reminds us to not be so caught up in the things that don’t matter, and to be open to love.”