Family with kids bonds with cats

Image
Family with kids, a 6- and 12-year-old, volunteer with cats at Best Friends Animal Sanctuary, bonding with one another and the felines in the process.
By Christelle L. Del Prete

In Cat World at Best Friends Animal Sanctuary in Southern Utah, there’s quite a lot for a six-year-old volunteer to learn and do. When Alisa decided to take her children — six-year-old Ethan and 12-year-old Elizabeth — on a vacation, Best Friends was the perfect choice.

Although Ethan is too young to volunteer in most of the animal areas on the Sanctuary, he was able to help out in Cat World, and that was A-OK with the whole family. They love cats and have a couple of rescued kitties at home in Portland, Oregon.

Despite the family members spending all their time with one species, Alisa says, “There were lots of choices as far as where we could go and what we could do.” Over several days, they worked in three buildings: Cat World Headquarters, Vinnie’s, and Jill’s Diner. “It's nice to be offered a choice … and great to see all the different tasks Ethan was able to do.”

Ethan was thrilled, too. The active boy enjoyed socializing cats, which included romping with some energetic kittens. And he was delighted to win the heart of a buff-colored tabby named Seth, who originally hissed at him but warmed up when he realized that Ethan had treats. Watusi, a cat in Vinnie’s, didn’t even need treats. She fell in love with Ethan instantly, and followed him everywhere.

Family bonding while working with cats 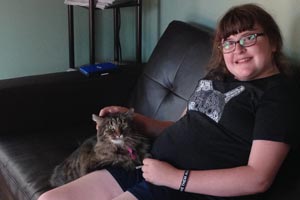 Working with cats also turned out to be a great opportunity for family bonding. Together, they read a few chapters of “Lord of the Rings” to Hamlet and Princess Blue, two cats who showed their appreciation by rubbing all over the book. Later, they took a grey-and-white tabby named Nala and a chatty black cat named Shadow out for stroller rides. Elizabeth steered Nala’s stroller, while Ethan slowly guided Shadow’s along the road that runs through Cat World.

This family didn’t stop having fun with cats when the workday was done, because then it was time for sleepovers. One night they hosted Finnegan, who, although people-friendly, made it clear he’d never seen a little kid before. As soon as he was released from his traveling crate, he climbed up onto the kitchen cabinets, where he could observe Ethan from a safe height.

But Ethan won him over. After giving him a chance to settle in, he pulled a chair over to the kitchen counter, climbed up and stretched one small hand up to the cautious, but curious cat. Finnegan crept forward, sniffed it, and that was that. The two were fast friends.

Elizabeth found a buddy in a cat named Brandy, who spent an entire night purring beside her. “It was nice to be able to take cats on sleepovers and provide helpful info about how they are with kids,” Alisa says.

Valuable insights about empathy for animals 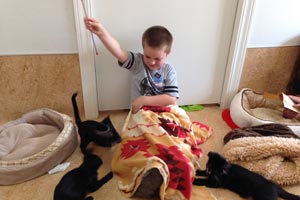 It was a win-win situation. The Cat World team received some important information about the cats, and Ethan gained valuable insights about animals with special needs, and those who are just a little bit different.

Hamlet and Seth, for example, have viruses that affect cats’ immune systems and make them more susceptible to infections -- feline immunodeficiency virus (FIV) and feline leukemia virus (FeLV), respectively. Ethan discovered that cats are all individuals who have different preferences.

“He saw that some of them preferred to be read to, rather than petted or played with, so he had to accommodate their needs. That’s good for him to learn at his age,” Alisa explains, adding that while families with kids may not realize how kid-friendly Best Friends is, for her family it was “an amazing experience” that “far exceeded anything we could have imagined.”

Additional note: Good news, Brandy and Finnegan have both been adopted since the family visited.

Go here for more information about volunteering at the Sanctuary.