Image
Wolfi is remembered for the love he shared.
By Best Friends Animal Society
By David Dickson

The adage about cats having nine lives doesn’t always apply equally. For Wolfi the cat, he had 97 lives if he had one. And he lived each to the fullest. "Wolfi slapped death right in the kisser more times than we could count," says caregiver Alisa Alexander. A few weeks ago, though, Wolfi decided he’d finally had enough of beating the odds. A near-constant stream of well-wishers stopped over to say goodbye before he was euthanized humanely due to quality-of-life concerns. He was ready to go. 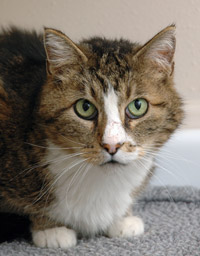 Wolfi, a few years ago

To know Wolfi was to love him. And it didn’t take long for people to accomplish either, thanks to Wolfi’s determination to get to know everybody who crossed his path. Of all the many virtues Wolfi had, patience was not always one of them. If Wolfi wanted your attention, he’d meow for it loud and clear until you got the point. "It was impossible to ignore!" says caregiver Cathy Overfield. One of Cathy’s favorite memories of Wolfi, in fact, involves just such a prolonged act of Wolfi persistence.

A repairman was fixing a washing machine in the building one day. Much to the man’s confusion, Wolfi kept following him around and meowing in full-volume howls for attention. The caregivers finally translated for the poor confused repairman, explaining that Wolfi simply wanted to be picked up and held. Once the man understood, and complied accordingly, Wolfi was all smiles! "That’s how Wolfi got people to fall in love with him," says Cathy. "His energy and presence was simply larger than life."

"He demanded attention," says Best Friends Cat World manager Michelle Warfle. The interesting part is, people only loved him all the more because of it. Wolfi wasn’t a one-way attention sponge. When people loved him, he loved them right back. "Volunteers loved taking him on outings," explains Michelle. "It was obvious he enjoyed it." 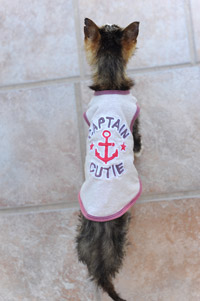 For years now, Wolfi has been quite the iconic, well-dressed, thin little old man at Cat World. He had a host of medical issues, from being FIV positive, to deafness, renal failure, dental problems, stiff joints and more. He’s had frail health for years, defying medical odds at every turn and living life with enthusiasm. All along, he’s charmed people from the moment they laid eyes on him.

Regarding that frail health of his, everybody who met Wolfi wanted to pamper him whenever possible. Volunteers and visitors sent him enough outfits to keep him in style — and to help him stay warm — no matter the occasion. Further, his many fans often gave gift certificates to the local grocery store, to be redeemed in the form of Wolfi’s favorite food in the universe: chicken! Visitors to Quincy House (formerly known as Kitty Motel) would often enter the building to find a crock pot stewing away with Wolfi’s meal inside. At the same time, there would be Wolfi, presiding over the proceedings. "He always knew when the chicken was ready," adds Alisa. 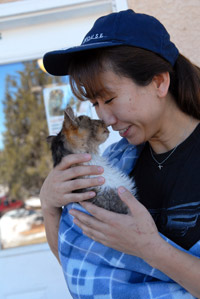 Wolfi liked his food portions on the large size, something you might not expect, given his thin size. Whole pieces of pizza (when he could steal them), big chunks of chicken — not cut into small pieces, thank you very much! His appetite for food matched his appetite for life: the bigger, the better.

Many visitors recall seeing Wolfi cruise through the building in a baby sling, carried about by one of his caregivers during daily tasks when Wolfi wanted some extra company. Clearly, he had a knack for convincing people to include him in whatever was going on!

He wasn’t only close with the people in his life. He always had a variety of cat friends to snuggle with. "He had the whole building under his spell," says Cathy. One of Wolfi’s closest buddies, Alfie, another lobby cat, stuck beside him to the end. On Wolfi’s last day, he stayed warm by lounging on a heated bed, wearing one of his handsome sweaters, with Alfie by his side. Wolfie said goodbye knowing, as he always did, that he had close friends everywhere.

One brief memory from caregiver Tricia MacArthur sums up volumes. She recalls a sleepover she once had with Wolfi. He wanted so much to be near her during the night that he wouldn’t even eat his dinner if she didn’t hold him in her lap. He snuggled up against her body until morning. After this one sleepover, whenever she’d visit his building, Wolfi would run over to say hello. That’s just how he was. Once he loved you, he loved you forever. "I really miss the Wolfman," says Tricia, "but those memories will always be precious to me." 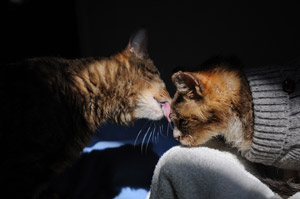 Caring for Wolfi throughout his life was a privilege and a pleasure. We always hoped that he would find a home of his own, but we were happy to give him a home here at Best Friends. We know that so many of you who met Wolfi either by visiting the Sanctuary or reading about him online loved him too, so we are not alone in wishing him farewell and remembering him with a mix of sadness and of joy. It’s all thanks to our members that we are able to do our work and know the pleasure of helping animals like Wolfi.