Image
A favorite dog of shelter staff and volunteers, a pit bull who'd been waiting for a home for a while is adopted by a man who is charmed by him.
By Best Friends staff

Best Friends in Los Angeles works collaboratively with animal rescue groups, city shelters and passionate individuals dedicated to the mission of making Los Angeles a no-kill city. As part of this mission, Best Friends hosts adoption and fundraising events, manages two pet adoption centers, and leads the No-Kill Los Angeles (NKLA) initiative. Together, we will Save Them All.

Nearly 600 pets found homes at recent NKLA Super Adoption, presented by BOBS from Skechers, and with each adoption, a victory bell rang, and the crowd cheered. But for the staff and volunteers of Best Friends in Los Angeles, one dog’s adoption was extra cause for celebration.

Huck, an eight-year-old pit bull terrier mix, had waited a long time to find that special someone — three years, to be exact. So, when Shane Roberts, a mechanic from Granada Hills, said he was taking Huck home, happy tears and joyful smiles broke out.

“I was absolutely elated. I was almost shaking with excitement,” says Samantha Sheldon Fiock, a Best Friends volunteer. “Sometimes it will take a dog a while to find a permanent home; but in the end, the wait is totally worth it.”

Making friends with a dog

Huck was originally transferred in 2015 from a Los Angeles Animal Services shelter to the Best Friends Pet Adoption Center in Mission Hills. A little shy and stubborn at first, Huck (with the help of staff and volunteers) transformed into an easygoing charmer.

Dog caregiver Jeff Brady made Huck his project dog and taught him cues such as sit, stay, come and down. Huck was a natural and learned quickly due to his fondness for treats and approval. His only challenge was that he disliked other dogs, which meant that Huck would have to be the only pet in the home. 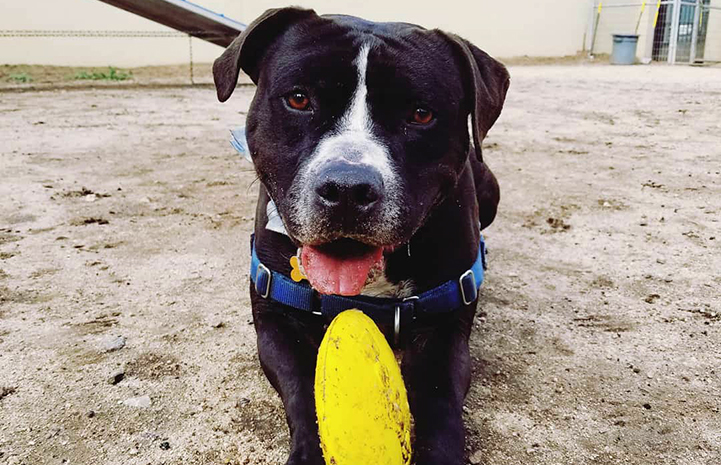 Because he was housebroken and reluctant to go to the bathroom in his kennel, Huck was listed as a “potty-breaker” dog; so, Samantha began to work with Huck by taking him out for walks first thing in the morning.

“He was so calm and well-mannered,” she says. “I took Huck on a hike and he was a dream in the car. He totally stole my heart when he found my big Jolly dog ball and just lay out in the back chewing on it.”

Michelle Sathe, PR specialist at Best Friends Los Angeles, began working with Huck after staff alerted her to what a great dog he would be for media appearances. And, like Samantha, Michelle was quickly captivated by Huck.

“Sometimes handling a big dog can be a challenge, but it was super easy to put a harness on him, and he would walk perfectly by my side,” she says. “Once he was outside, Huck would get a big grin on his face and lean in for snuggles.”

She took Huck on TV several times, hoping to spark some adoption interest. When a TV station came to the center, Michelle would always feature Huck because she trusted him to always show nicely on camera. 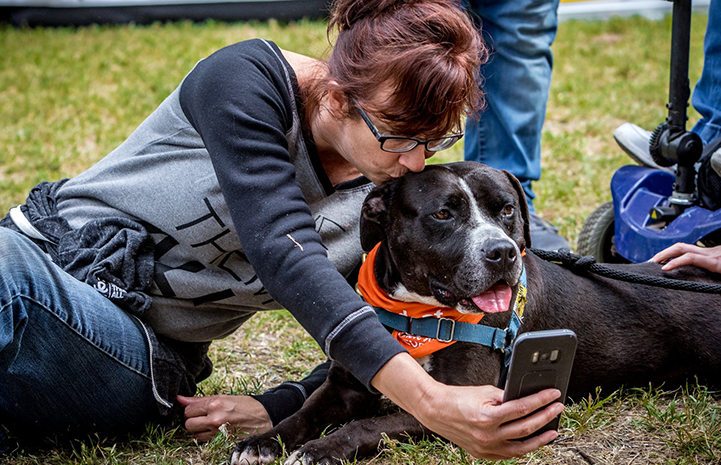 Last Christmas, Huck wore a festive jacket for a live TV appearance that lasted a full two minutes that allowed him to show off his many tricks. Michelle thought for sure Huck would be home for the holidays.

“I had several friends tell me that they had seen Huck on TV — he was so awesome,” Michelle says. “But no one came to adopt him. I just couldn’t understand it.”

For the next several months, Michelle would sneak in some time with Huck whenever she was at the center. Whether it was a quick game of fetch or trip to the nearest Starbucks for a “puppucino,” Michelle would snap photos that would promote Huck on her social media accounts.

Michelle felt the same way about Huck as a lot of people did. “If I didn’t already have two dogs at home, I would’ve adopted Huck myself,” she says. 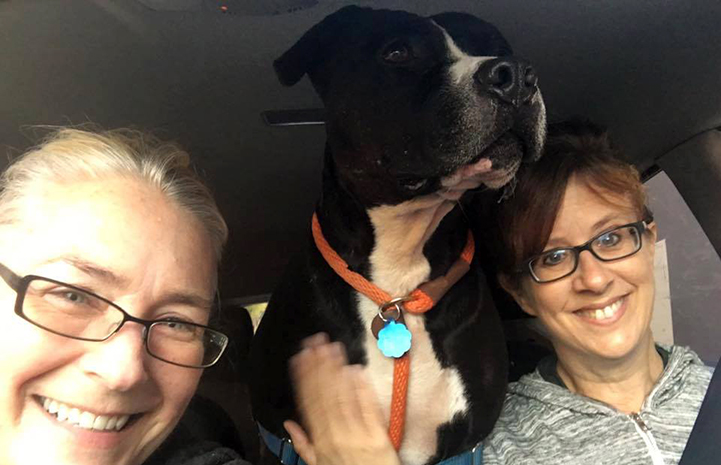 Pep talk for a shelter dog

The night before the super adoption, Samantha decided to take Huck home for a sleepover as part of Best Friends’ “adventure buddies” program, which allows for off-site visits and short foster stays with center volunteers.

“I thought it would be a good opportunity to let him have a night to just hang out before all the excitement of the weekend,” she says. “He deserved a night to just sleep in someone's bed.”

As they drove away from the adoption center that night, Samantha gave Huck a pep talk.

“I told him this would be the last time he’d see the center, because we were going to find him a home that weekend,” she says.

Sure enough, Huck was the perfect guest — snoozing all night and snuggling between Samantha and her husband. In the morning, she loaded Huck into her car and headed to the super adoption.

How to choose a dog

It wasn’t until the second day of the event was nearly over that Huck’s life changed forever.

Samantha and Huck were cuddling in his kennel when she noticed a man walk up with a big smile on his face. He stopped at Huck’s kennel and Samantha immediately started telling him what an awesome dog Huck and described the highlights of their sleepover. Then she asked if he would like to meet Huck. The answer was yes. 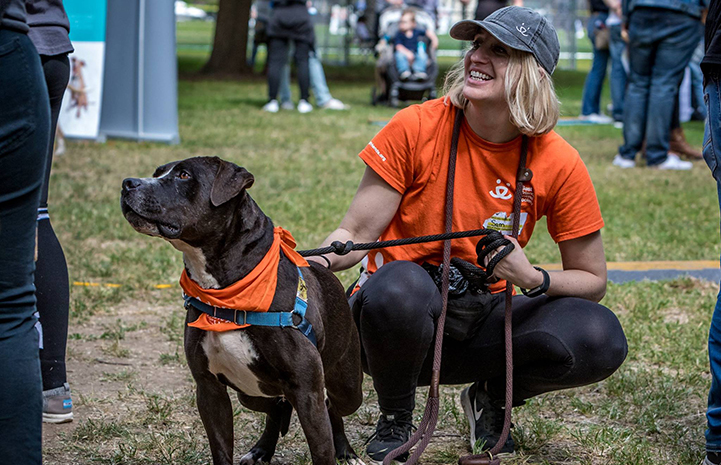 Shane had seen Huck earlier in the day and really liked his look and demeanor. He walked around and continued to look at other dogs, but something kept bringing him back to Huck.

“When I saw Huck laying on Samantha’s lap in the kennel, I thought: That’s it. That’s the one,” Shane says. But after spending time with Huck, Shane was even more convinced. He told Samantha that Huck would be living in a home with a yard and no other pets. Shane’s retired parents also lived in the home and would be there to care for the dog while Shane was at work. It was a perfect match.

As word spread that Huck was being adopted, a stream of Best Friends employees and volunteers came to congratulate Shane and say goodbye to their friend.

Michelle took off his “Adopt Me” bandana, while Shane filled out the adoption paperwork. She told Huck: “You don’t need this anymore. You have a dad now. You’re going home.”

The gathering became so large that someone suggested they move to the stage area for a group photo. It was the same spot where Huck was showcased that morning and where Michelle said she would do a happy dance if he was adopted. That afternoon, she did just that while waving her arms wildly and grinning from ear to ear. 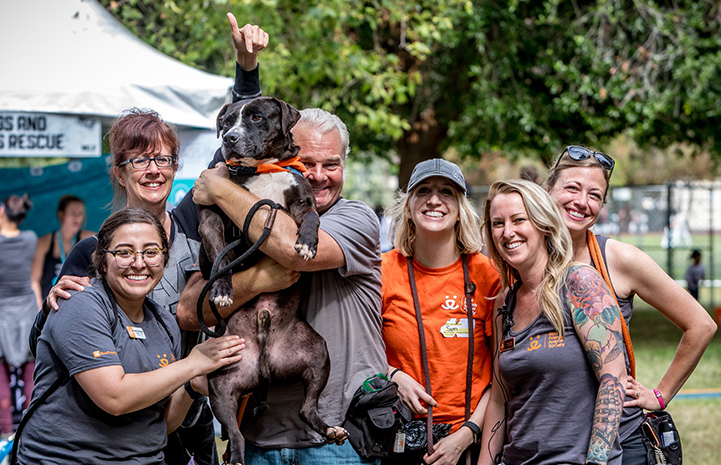 Huck’s new dad was surprised and touched by all the attention his dog generated. “Oh my gosh: It was overwhelming in a good way,” Shane says. “It was so much fun that it made the experience that much better.” 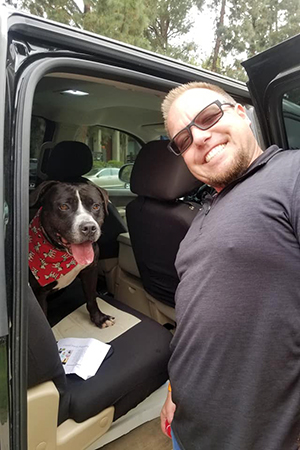 Shane said it didn’t take long for Huck to settle into his new life and become a major member of the family. They walk daily, and Shane is continuing to work on Huck’s training. Whenever they go (whether it’s the beach or a hiking trail), Huck is very popular.

“People come by and Huck just loves on them,” Shane says. “He surprises me every day with how loving and cuddly and smart he is.”

Shane is surprised that someone didn’t adopt Huck much earlier; however, he’s grateful that he was the one to do it.

“Huck’s absolutely my best friend. Without a doubt, he is everything I was looking for — more than I was looking for,” says Shane. “Adoption is the best way to go. There are so many dogs like Huck, just waiting for that perfect person to come by.”