Image
Read about our favorite dog and cat adoptions from the NKLA Pet Adoption Center, including a German shepherd mix from Iran and a scaredy cat.
By Christina Green

Next, the staff of the NKLA Pet Adoption Center, also in L.A., shares a few of their fondest memories. This center features not only Best Friends pets, but also adoptable dogs and cats from several of the local rescue groups who are part of Best Friends’ No-Kill Los Angeles (NKLA) Coalition. Since opening its doors August 1, 2013, the center, operated by Best Friends, has found homes for more than 5,100 dogs and cats.

Instant chemistry with a dog 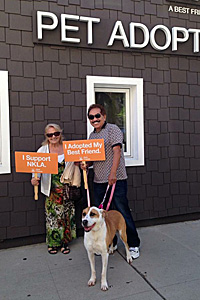 Some adoptions are a matter of chemistry. Hope, for instance, came to the NKLA Center from coalition partner Labs and Friends Rescue and was very dog reactive, which means she’d act quite menacing whenever she saw another dog. In other words, she had the wrong kind of chemistry for the many families looking for a second dog.  “It was difficult for people to want to work with this behavior at home,” says Vania Campos, adoption specialist at the center. “But then a wonderful couple came in after seeing her outside on a walk.”

The couple toured the facility and saw that there were dozens of dogs available to adopt. But even so, they only wanted to meet Hope and no one else. “The moment Hope came into the room she jumped right up on the couch with them as if she'd known them all along,” says Vania. “They immediately fell in love and after spending some additional alone time with her, they decided to take her home.”

The chemistry couldn't have created a better match for a retired couple with no other pets in the home and so much love to give. And Hope doesn’t have to worry about sharing that love with any other dogs.

“Chloe, who came to the center from A Cat's Tale is one of my favorites,” says Alyss Tsukayama, pet caregiver at the center. “We put her in a special area for cats like her because she was so very shy and scared of people and most things.”

In fact, Chloe was so shy that she would sit in one of the cubbies all the time and not really welcome people to visit. She didn't love being petted or picked up. There was a way to her heart, though — her stomach. She loved treats.

“We worked with her and made tiny baby steps of progress with lots of treats and patience,” says Alyss. “She eventually allowed some of us to pet her and to sit near her, but never really warmed up too much.”

But then her would-be adopter walked in the door. It was love at first sight. And even better, it was absolute acceptance, too, because this wonderful lady totally understood Chloe’s behavior.

“She spent a lot of time with Chloe and by the end of their meet and greet she was holding her in her arms,” says Alyss. “It was amazing.”

Chloe continues to thrive in her new home. 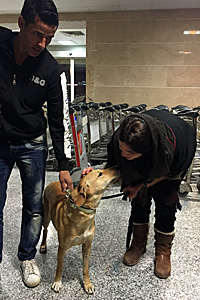 “An adoption that particularly touched me during her short time with Best Friends was Kamy, a Karma Rescue dog who originally came to the U.S. from Iran,” says Sheila Kouhkan, NKLA manager.

Kamy, a German shepherd mix, clearly lived in deplorable conditions in Iran. The poor dog had vicious-looking scars from stab wounds. Karma Rescue flew her to Canada and later to the U.S. And less than a week after arriving at the NKLA Center, a lovely lady who recently lost her dog and was ready for another forever companion decided to adopt her.

“When Kamy was ready to go home, I told her "kiss" in Farsi and she give me a little kiss and was on her way to her forever home,” says Sheila. “She's a unique example of the American Dream and is proof that there is power in collaboration.”

A cat called 'Theodore Forrest Beauregard Olivier, Emperor of Catmas and Noble Defender of the Household' 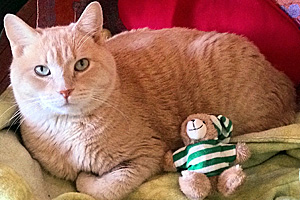 But everyone at the NKLA Center knew him as the more humble sounding “Poppy.” His adoption stood out to everyone — not because of his playful antics at the center or any specific goofy habits he may have had. It was because of just how thrilled his new family is to have him home with them.

Case in point — his new name. So how does a cat earn the distinguished title of “Theodore Forrest Beauregard Olivier, Emperor of Catmas and Noble Defender of the Household?”

Well, on his very first night in his new home, he bravely protected his people from a big spider. That’s one way to make a great first impression.

Writing in an adoption follow-up email to Best Friends, his new person Rachel says: “He was shadowing me a lot at first, but he's more confident I won't disappear on him anymore. So he'll be near me for a while at my desk and then find a place to curl up and sleep.”

Indeed, she says she feels like she hit the lottery when she adopted him. He seems to feel the same way.

Cat playing hard to get 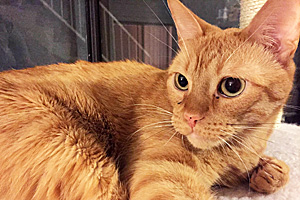 Everyone at the NKLA Center knew to excuse Chowder if he acted a little distant at times. Prior to Best Friends bringing him to the center, he had been in and out of shelters most of his life. But his aloofness didn’t keep him from becoming a staff favorite.

“He was so loved by staff and volunteers, and we'd always take him into the break room to hang out with us during our lunches,” says Vania. “Although he could be a little shy and not come out of his cat cave, he was incredibly sweet and loving.”

You would think he’d need to come out of his hiding places to connect with an adopter, right? Not Chowder.

“A lovely couple with a weakness for orange tabbies came in,” says Vania. “And even though he didn't leave his cat cave the whole time they met with him, they still fell in love with him and his story.”

In the words of a recent communication from the family: “Now, Chowder is a completely different cat. He plays like a champ and he's shown us some of his amazing jumping skills. Chasing the laser pointer is proving to be one of his favorite things, and he spends most of his down time sleeping on his giant cat tree. He's just the best little boy, and we couldn't have made a better decision by choosing to give him a forever home.”

Clara, a white pit bull terrier mix dog from Angel City Pit Bulls, had an uncanny ability to use her looks to her advantage. Sneak quietly up to her run, and you might find her busy chewing away on a toy without a care in the world. But let her know you’re there, and expect a show.

“Clara could have a very sad appearance,” says Katie O'Shaughnessy, lead pet caregiver. “Seriously, Sarah McLachlan music could have been her soundtrack.”

But Clara learned the sadder she looked, the more attention she received from staff and volunteers, including awesome walks. So she made lots of close friendships everyone associated with the center. She even helped build friendships among the people.

“On walks, she became known for her ‘pancaking,’ which is when a dog lays on the ground, refusing to move” says Katie.  “We'd receive phone calls for help from volunteers stuck blocks away with her.”

Of course, Clara didn't know that first impressions can be everything with potential adopters, and rather than jumping up to say hi to new people, she'd stay put on her bed, giving them her best frowny face.

But her time would come. On the last day of the adoption promotion sponsored by Zappos, Clara got to go home with someone who wasn't put off by her precious little pouty face, but fell in love with it instead.