Image
After surviving a harrowing journey, a tiny kitten is safe at Best Friends and doing what kittens do best - playing her little heart out.
By Christelle L. Del Prete

Kitten season is here again. It’s the time from early spring through October when cats reproduce and give birth to litter after litter of kittens. While it’s difficult to know exactly how many kittens are born each season, it’s estimated that hundreds of thousands of newborn kittens enter shelters around the country each year. As the kittens pour in, shelter workers, rescue organizations, volunteers and foster families kick into high gear to save as many feline lives as possible.

A kitten named Overdrive is one recent survivor with an unusual story, a spirit bigger than her tiny body and a little bit of luck that landed her at the Best Friends kitten nursery in Kanab, Utah. 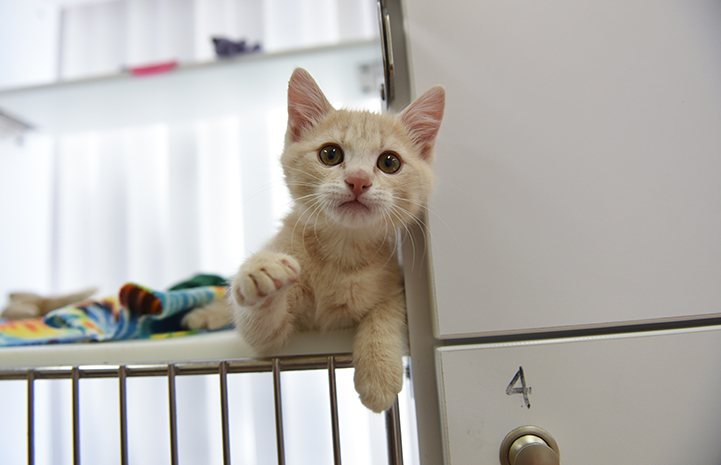 Newborn and very young kittens are extremely vulnerable. They have very fragile immune systems and must receive round-the-clock care to grow into healthy, well-socialized adults. And that’s only after they’ve been rescued from dangerous situations or pulled from overwhelmed shelters and placed in a kitten nursery program or a foster home.

Learn more about how kitten nurseries save lives

As fragile as these wee ones are, tales of remarkable resiliency come out of the Best Friends kitten nursery every year. Kittens can and do overcome incredible odds and go on to grow and thrive after receiving the TLC they so desperately need. Overdrive is one of these remarkably resilient kittens. 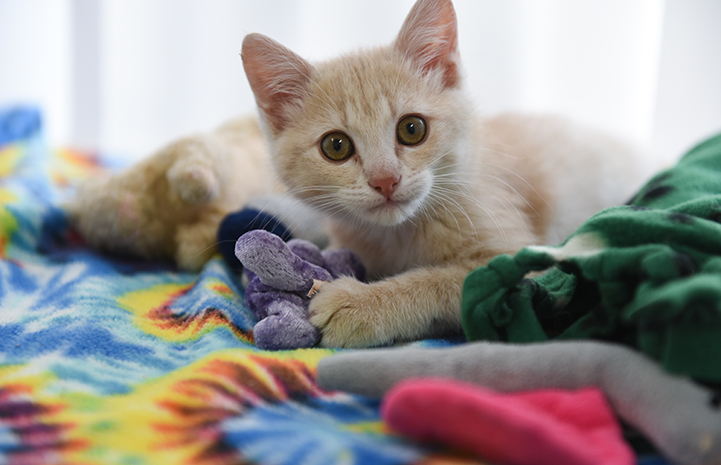 The little buff-colored tabby kitten traveled nearly 200 miles before landing safely at the Best Friends kitten nursery. To say she didn’t exactly ride in style is a bit of an understatement. She was stuck in a car engine compartment, and it was nothing short of miraculous that she didn’t suffer any life-threatening injuries during the journey.

A terrifying ride for a kitten stuck in an engine compartment

Overdrive’s ordeal began when some tourists were taking a break at a rest stop in Arizona. Someone there was giving away kittens, and though Overdrive was in the cardboard box, she must have escaped and wandered off to explore. Meanwhile, the tourists left the rest stop without a kitten — or so they thought.

When they stopped to eat at a restaurant about 15 miles north of the Sanctuary, they heard an alarming sound coming from under the hood of their car — tiny meows. It turned out that Overdrive had crawled up inside the car’s engine compartment and gotten stuck. She’d been there for hours and had traveled nearly 200 miles. 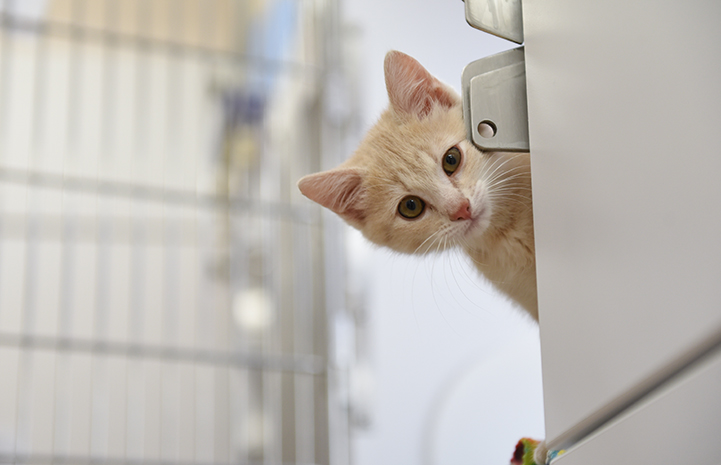 The tourists raced into the restaurant for help, and several locals rushed to their aid. Together, they pulled the tiny, frightened kitten out of the car engine and contacted Best Friends. Soon, Overdrive was safe at the Sanctuary. 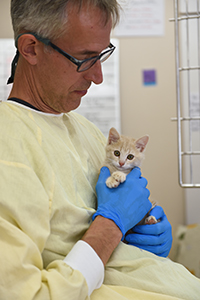 After being thoroughly examined by Best Friends vets, Overdrive settled in at the kitten nursery. While she didn’t have any physical injuries, she was understandably confused, shaken and scared. She was only about two months old and, within a single day, her whole world had changed. She’d taken what must have been a very uncomfortable and harrowing ride, her siblings were nowhere to be found, and she was in a new and strange place.

After soaking up lots of TLC and eating hungrily for the first day, Overdrive suddenly lost her appetite. She began losing weight instead of gaining like a young kitten should. Staff and volunteers at the Best Friends kitten nursery fussed over her and tried coaxing her to eat. She was rechecked by the Best Friends veterinary team, and again they found nothing wrong.

It was touch and go for a few days with Overdrive refusing all but tiny amounts of food. But after taking some medication to help stimulate her appetite, and getting even more love and attention, she rebounded. She started eating, gaining weight and becoming more active and playful.

The perfect nickname for a feisty kitten

While the little kitten was initially called Overdrive because of the way she got to the Sanctuary, the name has stuck so far because it fits perfectly with her delightfully feisty personality. 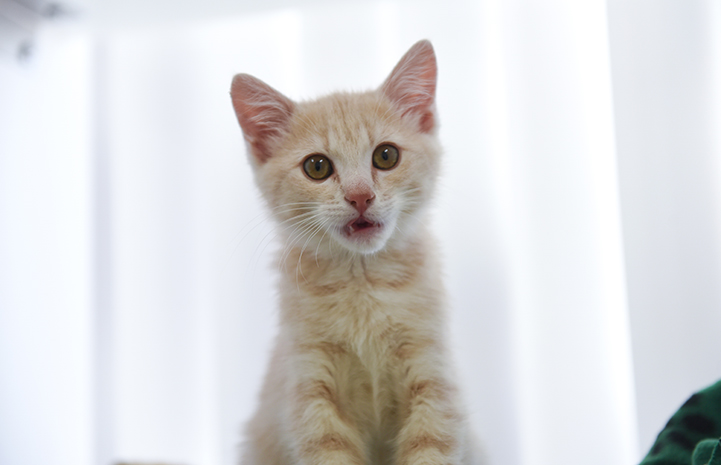 When Overdrive is not napping as growing kittens must do, she’s jumping, climbing and playing in her enclosure. Although she likes people, playtime is a much higher priority to her than cuddling. She’d rather roll around with a toy in her mouth than be held and loved on — at least for now. Because people acted quickly to get little Overdrive to the Best Friends kitten nursery, there’ll be plenty of time for that later. 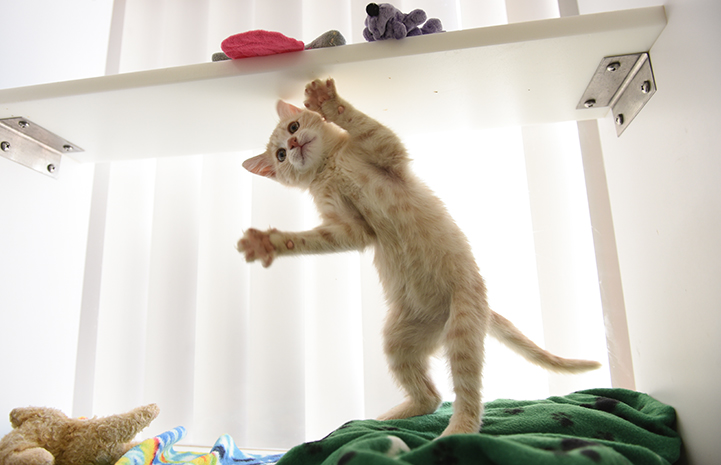