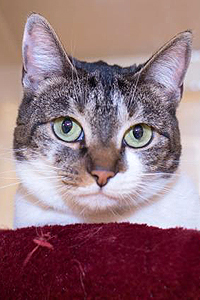 For the last few months, Stephanie Etherton has been helping Best Friends–New York’s adoptable cats stay happy and healthy until they find homes. The cats come from Animal Care & Control of New York City and Best Friends arranges for them to stay in foster homes and boarding facilities before showcasing them for adoption. One of those adoption opportunities is through PetSmart in Harlem, where Stephanie is one of many Best Friends volunteers caring for the cats until they find homes. While Stephanie loves taking care of all the cats there, one special girl was never far from her mind.

She would gush to her husband for hours about Paprika, a cute cat with a quilt-like coat. And though Stephanie thought her sentiments fell on deaf ears, she would be surprised to learn he was getting the message loud and clear.

As Stephanie was recently going about her duties caring for the cats, Paprika became quite vocal about her appreciation for Stephanie’s work. “She makes all kinds of interesting sounds and was always very insistent on getting my attention,” says Stephanie. “If I would be cleaning the kennel below hers, she would put her paw on my back.” Paprika would also purr like a motorboat and lick Stephanie’s face whenever she picked her up.

While Stephanie was thinking about what a lovely addition Paprika would make to her family, she was mindful of a promise she had made to her husband, Chad. “When I started volunteering, I promised him I would do my best to not bring any new friends home,” says Stephanie. Because the couple already has three cats, she agreed to not add a fourth — even though she’d fallen hard for Paprika. 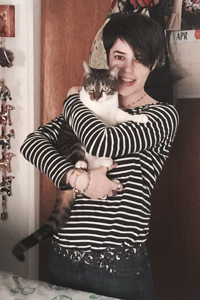 With a big Best Friends adoption event approaching, Stephanie was a little sad because she knew Paprika might go home with someone else. She told Chad that the thought of going back to PetSmart without seeing Paprika’s gleaming green eyes was weighing on her mind. To help cheer her up, he let Stephanie know that she should come home right after work that day, because he was making her a special dinner.

When Stephanie came home, she noticed right away that the bathroom door was closed. Thinking it was a plumbing problem, she asked Chad about it. He said she should look for herself. So, braced for the worst, she opened the door. Then she heard a meow and was stunned to see beautiful Paprika walking toward her, ready for loving. Chad had gone to the Best Friends adoption event and adopted Paprika himself, for Stephanie.

Paprika’s new name is Maisie, and she’s running circles around her brothers. “She has climbed to the top of every bookshelf and wardrobe and walks along the top of the railings that separate the different levels of our apartment,” says Stephanie. When she’s not watching the world from her favorite window, she loves to cuddle up to Stephanie and lick her face. Stephanie is madly in love with her new little girl and counts her blessings to have a partner like Chad.

“As far as surprises go, Paprika was certainly one of the top for me,” says Stephanie. “Knowing she's from a great organization like Best Friends makes it even better.”

Learn more about how Best Friends is helping to save homeless pets in New York.