Image
Best Friends and Philadelphia partners pull together to help a pair of sick kittens positive for the feline leukemia virus (FeLV).
By Christina Green

Semi-feral, feline leukemia, ringworm: Kitten siblings Kitt and Pratt had it all going for them. Or rather, against them, when they were found. But at least they had each other, living outside in Philadelphia, Pennsylvania.

And, thanks to intervention by the Philadelphia Community Cats Project, a collaboration between Best Friends and PetSmart Charities™, the kittens were saved from, well, let’s be honest, some pretty gloomy prospects. Instead they got special care to help them feel better and a comfy, cozy new place to live.

As Best Friends’ community cats project coordinator in Philadelphia, Aine Doley wears many hats. For starters, she teaches trap/neuter/return (TNR) to interested volunteers. The training includes information on how to humanely trap community cats (feral, free-roaming or stray cats), where to get them neutered and how to safely return them to their outdoor homes. Her team also lends out traps to the public and even coordinates rescue for cats not eligible to return back outside. These efforts led to a 35 percent decrease in the number of cats killed in Philadelphia’s shelters in just the first year of the project.

It was during a routine cat trapping project that Aine came across two kittens who fell into the category of those not eligible to return to their neighborhood once they’d been neutered. In fact, Kitt and Pratt were so sick, and in so many different ways, the best thing that could have happened to them was taking the bait in the Best Friends humane trap.

First, at just eight weeks old, they were awfully young to be let loose in the world. And there wasn’t a known caregiver looking out for them, so putting them back outside alone would have made their future risky. With their runny noses and crusty eyes, they also appeared a little under the weather. If the two little black kittens were going to make it, they needed longer-term assistance. 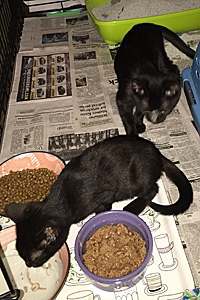 Aine checked Kitt and Pratt in with Philadelphia’s Animal Care and Control Team (ACCT Philly), Best Friends’ local shelter partner. During a thorough exam, even more illnesses revealed themselves. “Kitt had a pretty bad abscess, which had me pretty worried,” says Aine, “and both had colds and ringworm.”

Because of all this, they couldn’t be left at the shelter, where they’d run the risk of getting healthy kittens sick. Clearly, they needed a quiet place to mend where they wouldn’t infect other cats. So Aine decided to personally oversee their initial recovery.

But there was one more obstacle uncovered during the routine exam, and it was something for which there are no obvious outward symptoms — feline leukemia, FeLV. This viral infection attacks the immune system in cats, making almost any illness or infection potentially life-threatening if not cared for in time. (Best Friends has plenty of information about life with FeLV.)

That pretty much sealed their fate. Even if the kittens could beat colds and ringworm, they couldn’t be returned to the outdoors because they need someone keeping a close eye on their health and getting them medical care at the first sign of illness. That put them in yet another tough spot. Since they’d grown up on the streets, they were terrified of people and would have to adjust to life indoors.

As they regained their health and grew more comfortable with Aine, the kittens showed that with time and care, they could both probably adjust to being indoor pets. In fact, as they felt better, they began to act like normal, healthy kittens, possibly for the first time in their short lives.

“They love playing games,” Aine says. “Twisted pipe cleaners, balls to bat around — you name it, they enjoy playing with it.”

While they didn’t mind showing off to Aine, it was impossible to know how long they’d remain a bit shy, especially when brought to a new place where they could be adopted.

“I could pick up Kitt, but not Pratt,” she says. “He would just cower.” And that would be enough to put off many potential adopters in any environment. The kittens would need just the right place to go, someplace where they’d have plenty of time to continue learning that people are their friends.

Teamwork leads to the right place

After a couple of weeks, Kitt and Pratt healed up from their various illnesses and ringworm, though there’s no cure for FeLV. It was time for the next leg of their journey.

That’s where ACCT Philly came back in. Shelter staff reached out to local groups about taking in the two little ones, and luckily there’s a rescue group right in Pennsylvania that specializes in caring for kitties who need a little extra care. Soon Kitt and Pratt settled in, safe and sound.

It didn’t take a huge solo effort on any one organization’s part to save these two little kittens. But when everyone worked together through the Community Cats Project to save them, it made all the difference in the world to Kitt and Pratt.