Find The One this Valentine weekend 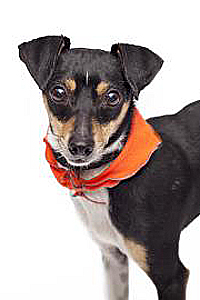 At this time last year, Mozart might have been feeling a bit down on his luck. In his young life, the little black dog with tan and white markings had been through several homes and eventually wound up in a Los Angeles city shelter. However, luckily, he made his way to the Best Friends Pet Adoption and Spay/Neuter Center just in time for a Valentine’s Day promotion. And as it turned out, he was about to meet potential family members who could understand how it felt to be a bit down. Best Friends’ Valentine’s adoption promotion, “The One,” was about to change his fate for good.

The adoption special encourages people to come out and adopt “The One” during Valentine’s weekend. This year the promotion will include $10 adoptions from all of Best Friends’ adoption avenues, including Best Friends Animal Sanctuary and the Best Friends adoption centers in Los Angeles, Salt Lake City and New York, plus participating No More Homeless Pets Network partners across the country. Last year, “The One” helped get thousands of pets into homes, including one spunky Chihuahua mix.

Monique Donnelly and her family had been through a rough year. Monique was going through a divorce, and she and her two daughters had moved in with her parents until they could get settled again. The light at the end of the tunnel was the promise that when they did get into a home of their own again, they would add a canine companion to their family. Then last February, as everything fell into place and they had a new place to live, it was time for Monique to keep her word. She looked online to find a nearby shelter and, as it turns out, one of the closest had a Valentine’s Day adoption promotion going on. She loaded the girls into the car and drove to the Best Friends Pet Adoption and Spay/Neuter Center in Los Angeles.

The perfect dog to adopt

Monique’s daughters, Emily, nine, and Claira, eight, both wanted a small dog. Monique, an avid runner, wanted a dog who could keep her company during her jogs and who could go on family hikes. At the pet adoption center, the family was drawn to Mozart, a peppy little dog with long legs that would help him keep up on those runs and hikes. A staff person brought him into a meet-and-greet room so the family could get to know him better, and he immediately jumped up on the girls as if to say, “I’m the one.”

When Monique heard his name, she got a bit teary-eyed. Her career is in music. “Mozart. It was just meant to be,” she says.

Family fun with their new dog 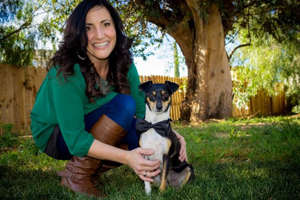 A year since last Valentine’s Day, the Donnelly family’s life with Mozart couldn’t be better. The girls spend their days teaching him new tricks. He’s a master at “sit,” “stay,” “lie down” and “shake hands.” He now takes treats gently, thanks to the “easy” cue they’ve taught him. But one of the best things about Mozart is watching the little fella’s antics. “He is so funny. He’ll play catch with himself by throwing the toy and then going and getting it,” says Monique. He also entertains his family with the “toy of the day,” choosing which toy from his toy box that he’ll play with.

After a long day of playing, doing tricks and hiking, his favorite nighttime activity is cuddling. In fact, if the girls go to bed without him, he barks until he’s allowed to climb in and curl up next to them. He’s made their family complete. Monique says, “I couldn’t imagine our lives without him.”

The family is looking forward to celebrating Mozart’s “birthday,” which they consider to be the day they adopted him, February 14.

Adopt your own perfect pet.