Two friends in Houston stepped up to foster a German shepherd and her 14 puppies in a one-bedroom apartment, making it possible to save their lives.
By Natalie Wordtmann 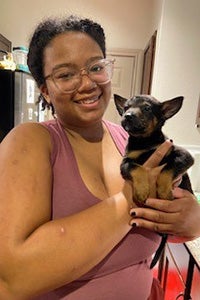 For many of us, the end of the week marks the time to finally get some rest and relaxation. For Sonali Mitra and Shelbi Armstrong, it became an opportunity to save 15 lives.

Shortly after Mama Fratelli (Mama, for short), a beautiful German shepherd and her 14 adorable puppies arrived at the SPCA of Brazoria County, illness broke out at the shelter. Desperate to get evacuate the animals in order to limit the spread, the shelter contacted representatives of Best Friends working in Houston to ask for help. Understanding the urgency of the situation, Best Friends quicky agreed to take in the large family.

Enter Sonali and Shelbi, two friends who both initially got involved with Best Friends after Hurricane Harvey. While volunteers were en route to pick up Mama (who’s named after a character in the motion picture, The Goonies) and her seven-week-old puppies, the Best Friends staff sent out an email plea to local volunteer and foster contacts, asking if anyone could take in the family — fast. It would be temporary, just long enough to assess the puppies and spread them out among multiple foster homes, where they could stay until they were old enough to be spayed or neutered and adopted. Sonali saw the email and immediately called Shelbi to ask, “Can we do this?” 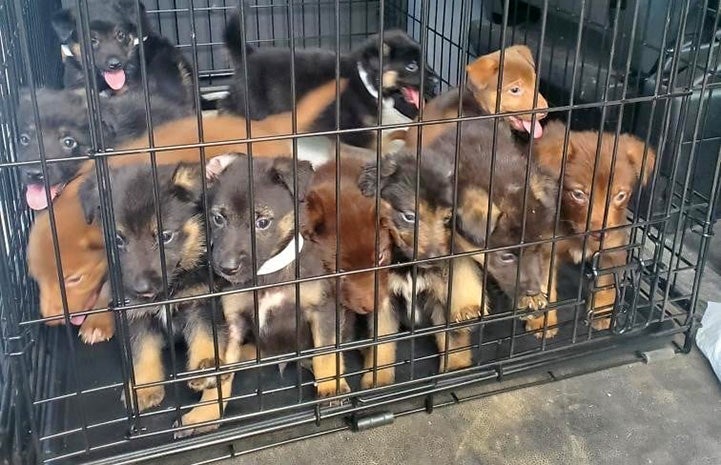 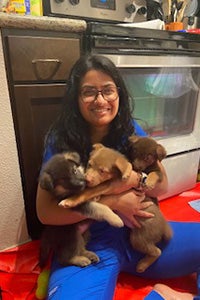 After discussing the logistics at length, they were confident — despite not having any previous foster experience — that they could team up for a few days to care for the large family. With Shelbi in the process of moving, Sonali offered up her one-bedroom apartment to be transformed into the puppies’ new foster home.

After a few calls with Best Friends staffer Megan Lee, it was confirmed that the two ladies would take in the large family. According to Megan: “The last thing we expected was a brand-new foster person to say yes. Sonali first said she could hold them for a few days, (but) we asked for a one-week commitment, knowing this was a lot of animals to take on at once … She came back right away with a yes that she could take them for a week.”

Once Mama and her puppies arrived at Best Friends and Megan set to work completing the puppy health checks, she discovered that one of the pups (Rosalita) would need extra care. Since she was skinny and lethargic, Megan took her home to give her fluids and syringe feedings until she got her strength up. “It was touch and go for the first few hours,” says Megan, “but by the morning she was acting just like a normal puppy again and devouring food like crazy.” 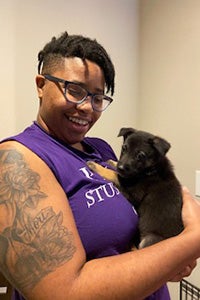 At the same time, Sonali and Shelbi were busy preparing the apartment to safely host the puppies. Her kitchen, outfitted with a tarp and more puppy pads than they could count, became the perfect puppy playpen. And to create more space, they decided that Sonali’s dog, Luna, would stay at Shelbi’s place. “We wanted Mama to be able to feel secure, focus on her puppies and not worry about having another dog around” says Sonali.

When the puppies (minus Rosalita, who remained in Megan’s care) arrived  at the apartment, Sonali and Shelbi took turns carrying them in twos and threes across a busy midtown street and into their new puppy playpen. “My favorite moment, once we got all the puppies inside, was when Mama came in and just collapsed in my lap from exhaustion and relief,” says Shelbi. Now it was time for everyone to get to know each other and let the fun to begin.

The puppies were confined to the puppy-proofed kitchen, but Mama was given free reign of the apartment. This arrangement worked out well since the puppies were starting to wean off their mama. She was able to get plenty of rest and relaxation while still being able to care for the smaller puppies needing extra attention. 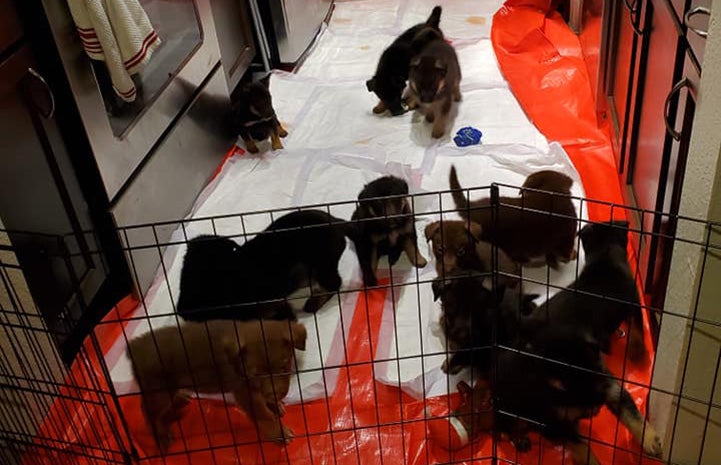 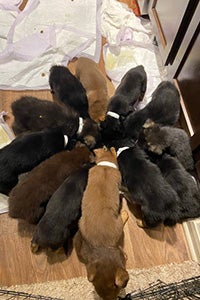 Though the first day was a little chaotic, Mama, the puppies, Sonali and Shelbi quickly settled into a new routine. The two ladies formed a truly dynamic duo, splitting their co-fostering into day and night shifts. Shelbi, whose job allows her to work remotely, came to Sonali’s apartment each morning and watched the puppies during the day while Sonali was at work. When Sonali came home, she assumed the responsibilities of the night shift. And if that wasn’t enough, she was also in the process of applying to medical school. To say it was a hectic week is an understatement, but by all accounts, it was totally worth it.

Even with Mama’s dedication to her babies, keeping up with the demands of 13 rambunctious puppies was no easy feat. With the help of some close friends, they were able to keep everyone well-fed and clean. “All the puppies seemed to be either awake or asleep at the same time,” says Sonali with a laugh. “Except Bear … this massive puppy who didn’t want to sleep.” Suffice it to say — bath time was no easy undertaking with so many puppies whose schedules did not always line up. 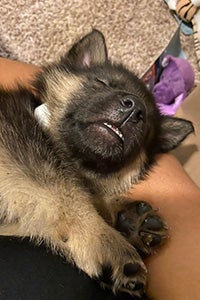 Over the next few days, Megan regularly dropped by the apartment to deliver additional supplies and pick up a puppy or two to drive to a new foster home. “Things were very easy once we only had seven or eight puppies to manage,” says Sonali.

Just under a week after taking over Sonali’s kitchen-puppy playground, all the puppies had been moved into more long-term foster homes. In some cases, the foster families quickly made the decision to adopt their new pups.

With the puppies safe, Mama is taking her turn at receiving care in a foster home. She’s started treatment for heartworm and is gaining some much needed weight. And according to Megan, she knows sit, down, speak, shake and how to walk well on a leash.

Though Sonali and Shelbi miss Mama and her puppies, they are proud of the impact they had on so many lives. Both say they would definitely foster again, and they agree that they could not have co-fostered (or co-parented) with anyone else.

Make an impact through fostering

Contact your local shelter to learn how you can sign up to foster a pet in need.

Photos courtesy of the SPCA of Brazoria County, Sonali Mitra and Megan Lee