Image
Lake City Humane Society in Columbia County, Florida, used to be a high-kill shelter but has made drastic improvements to its save rate in a short period of time.
By Christina Green

It would have been doomsday for the friendly momma dog named Phoenix, had she showed up one year earlier at the Lake City Humane Society shelter in Columbia County, Florida.

Because it’s a nonprofit animal shelter with the county’s municipal contract, it relies on county funding. But in predominantly rural and deeply southern communities, like Columbia County, there are few resources to go around. And animal welfare sometimes ends up last in line. As a result, Lake City Humane Society used to have a shockingly high kill rate.

Then new leadership took over. A new board of directors came in. And they’ve been taking advantage of every opportunity to turn things around, which includes joining the Best Friends No More Homeless Pets Network.

Lake City Humane Society is on its way to no-kill status. As for Phoenix — well, the pit bull terrier mix is in heaven all right, living the dream with someone who adores her. 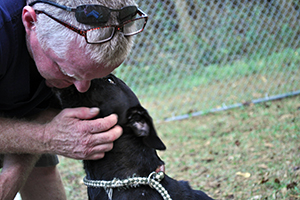 Ending the killing of dogs and cats in America’s shelters is Best Friends’ main objective. Obviously, that requires building bridges with those very shelters. Around 13 percent of Best Friends’ No More Homeless Pets Network partners are municipal animal shelters or other types of shelters with municipal contracts, but Best Friends wants to boost that number.

“We’ve always had some shelters sign up, but when Best Friends as an organization refined our focus to emphasize decreasing shelter deaths specifically, we started taking a closer look at how the network can help,” says Liz Finch, senior manager of Best Friends national programs. “We have the goal of embracing 30 to 40 new shelters per year and tailoring the programs we offer to meet their needs.”

Unique hurdles lie in the pathway to no-kill for open admissions animal shelters. For some, it’s about restrictive ordinances. So, for example, reducing adoption fees as part of a Best Friends promotion could be forbidden. Others, like Lake City Humane Society, must work with local elected leadership which may not consider funding animal welfare a priority.

But you know what they say — where there’s a will, there’s a way. And lucky for the dogs and cats of Columbia County, they have a shelter director with plenty of will.

A Florida animal shelter in crisis

“That made me sick,” she says, herself a longtime supporter and advocate for Best Friends’ mission to end the killing of dogs and cats in shelters. “It almost made me want to leave immediately.”

She says the organization’s combined save rate for dogs and cats wasn’t any better — around 30 percent. They had the grim distinction, she says, of having the second highest number of shelter deaths, compared to counties like them in Florida.

Making matters worse was a local government that was stuck in the old ways of thinking.

“It’s a much older council, whose thinking is more in line with the 1960s and 1970s,” she says. “They barely approve the funding to shelter an animal for four days. They won’t pay for spay/neuter or even vaccinations, let alone medical care for a sick or injured animal.”

In her conversations with local residents, she says most were shocked and saddened to learn what was happening to the dogs and cats in the shelter. “The way the former staff presented it was very misleading,” she says.

Help is on the way

Laura says after hitting a brick wall locally, she turned her focus to bringing in outside help.

“The only way we’re going to turn things around is by asking for help from larger, better-funded organizations, like Best Friends, Maddie’s Fund, First Coast No More Homeless Pets and No More Homeless Pets Gainesville,” she says, all of which have injected both resources and hope into the future for Columbia County’s homeless pets.

From the 162 partners sharing their results with Best Friends, there were some 6,600 adoptions during that month-long campaign.

Rising from the ashes 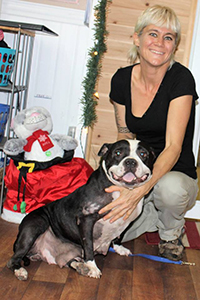 Everyone knew Phoenix for all of the most heartbreaking reasons. Laura says she lived her entire life on a chain and was bred repeatedly until she couldn’t produce anymore puppies.

How did they know? Because Phoenix had been rescued following cruelty charges more than a couple of times. But the local judge kept throwing out the charges, and Phoenix was forced to return to her nightmare — until she no longer turned a profit. That’s when her person brought her to the shelter.

“She wasn’t a young dog and her body showed she had delivered many litters during her life,” says Laura. “One year before and she would have been killed immediately.”

Instead, Laura drove her an hour away to the only affordable animal clinic in the area and had her spayed. The healing process was difficult, but it turned out to be a blessing because one of the vets fell for her.

On Christmas Eve, just as the shelter was closing for the night, the phone rang. It was the vet asking if Phoenix was still there. Within the hour, Phoenix was off to live happily ever after with her new friend.

Liz says that despite the obvious challenges she’s noticing a growing shift in public perception about local animal shelters in general.

“The amazing work done by rescue groups to pull more dogs and cats out of shelters, coupled with a new generation of shelter leadership like Laura, is helping shelters gain more public support, which leads to the political will to provide more funding.”

Laura sees that change in her community’s residents, too.

“During the holiday promotion, we promoted heavily on Facebook and in the paper,” she says. “Most of those people who adopted saw the ads, but didn’t even notice the $25 part until they were set to pay. They just wanted to save a life. That’s what I love about this community. Everyone wants to do the right thing. They just need a little help.”

In the meantime, Laura’s strategy for tapping into outside sources to improve shelter services has paid off. In less than a year, the shelter is saving 67 percent of its dogs and cats.

“I want to show that no-kill is possible — not just in large, resource-rich cities,” she says, “but even in a rural, southern community where resources are scarce but the people are receptive.”

Thanks to the hard work and dedication of staff working at shelters like Lake City Humane Society, Best Friends is very excited about what’s possible, too.