Image
Ellen the Vicktory dog, who was rescued from NFL player Michael Vick's fighting ring, passes on, but not without leaving a legacy of kindness behind.
By David Dickson

The Vicktory dogs at Best Friends, indeed all pit-bull-type dogs everywhere, have lost a true ambassador. Ellen, one of the most affectionate dogs a visitor could hope to meet, passed away peacefully last weekend. At 11 years old, she was one of the oldest of the Vicktory dogs (seized from the property of NFL quarterback Michael Vick).

"Ellen's health is failing," explained Best Friends veterinarian Dr. Patti Patterson right before the decision was made to humanely euthanize Ellen. "Although we do not know the cause of her illness and deterioration, we have exhausted all diagnostic and treatment efforts that we feel could help Ellen."

The caregivers and medical team fought long and hard for Ellen, but in the end her health wouldn’t turn around. Some unknown disease was causing weight loss and muscle loss, as well as preventing her stomach from emptying. Despite a barrage of tests, the medical team couldn't determine the source of the problems. Her quality of life was no longer at an acceptable level.

During her final two days, Ellen had a steady stream of visitors, all of them stopping over to say goodbye to this dog who was so easy to love.

"I’ve never had a dog who was so affectionate," says caregiver Maddie Haydon. One of Ellen’s nicknames, in fact, was Ellen Belly. Ellen’s favorite thing in the world was to flop over for belly rubs. As a close second favorite activity, she was extremely fond of handing out kisses by the dozen. 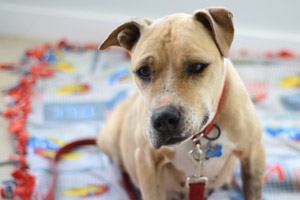 Loved by all who met her

"She bonded with everyone she met," Maddie says. That’s an even greater accomplishment than you might think, considering that most of the time she was meeting people from a distance.

Per court orders, the Vicktory dogs were not allowed to interact directly with Sanctuary visitors. Even though she couldn’t visit with them face to face, Ellen still left a lasting positive impression on those who came near her.

When tour groups stopped by, a caregiver would often bring out Ellen on one side of the parking lot with visitors watching from the other side. She would smile, wag her tail, and flirt with them the whole time. "The impact that it had on our visitors, tours and guests was visible," says caregiver Tom Williams. "You could see those people were touched."

One such person Ellen touched deeply was a local volunteer named Betty Grieb, who fell in love with Ellen instantly. Betty wasn’t about to let the fact that she couldn’t enter Ellen’s play area get in the way of anything. So, she spent more than three years reading to Ellen on the other side of the fence. "Ellen would go crazy whenever she heard Betty’s car pull up," Maddie says.

Last month, Ellen’s dream to meet visitors up close finally came true. The red collar (staff-only) status was lifted for seven of the Vicktory dogs, including Ellen. At last, she could greet visitors face to face. "She was in her glory," Tom says. When visitors stopped by, she loved nothing more than to march right into their midst and hand out kisses with unabashed enthusiasm. 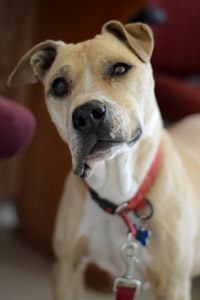 Ambassador for the breed

Admittedly, once they heard about Ellen’s background, many of the visitors were somewhat hesitant at first to meet her. After all, there are a lot of myths still floating around about fighting dogs and their personalities. Such reservations, however, only lasted seconds once she turned on the charm. "You could just see them change their perception," Tom says. "She went a long way toward helping not only the Vick dogs that are here, but pit bulls in general. She helped to dispel the myths about them."

A day to celebrate

There was at least one volunteer, however, who already knew what a loving soul Ellen was. When Betty Grieb finally did get to greet Ellen right up close after so many years, it was definitely a moment to remember. "It was like a dream come true," Betty says.

Naturally, Ellen wasted no time in kissing Betty within an inch of her life that first day, and every day they shared thereafter. "I really loved her," Betty says. "She was such a sweet girl, so full of life."

Farewell, Ellen, and thanks for everything. You will be sorely missed.

See Betty Grieb and many others who loved this special Vicktory dog in our video celebrating Ellen's life at the Sanctuary.