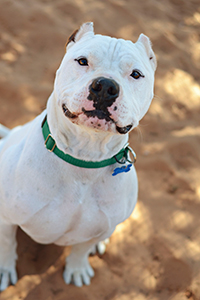 Ralph is one of Dogtown’s most unlikely heroes. The big white dog with the handsome face has overcome a lot in his life. His triumph over fear has done much more than improve his life. It’s made it possible for him to save other lives.

Now six years old, Ralph came to Best Friends from a rescue group. Before that, he lived in a shelter in Utah, and before that no one knows what he went through. But it was clear he’d been treated unkindly. His ears were cut short, and he was very fearful of new people. Even though he’s a big, muscular Argentine mastiff mix, he’d cower whenever anyone reached out to pet him.

If people didn’t understand that he was scared and needed space, Ralph would use his teeth to try to keep himself safe. But the nervous dog was only earning himself a bad reputation that way. So his caregivers at the Sanctuary began working to help Ralph overcome his fears.

Ralph was especially uneasy around new people, because he wasn’t sure if they were nice or if they would hurt him. He became agitated easily and would freeze to signal that he was feeling uncomfortable. Dogtown caregivers quickly figured out that the key to keeping Ralph feeling calm and safe, rather than anxious and distressed, was in gaining his trust. 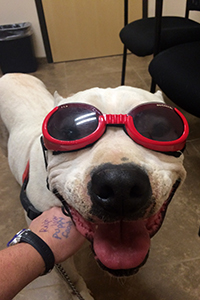 Once Ralph gets to know someone, he lets down his guard and his sweet, gentle nature comes out. And all it takes to form a bond with him is some time, patience and yummy treats. Then, his caregivers say he is “100 percent reliable,” meaning he is gentle and loving and won’t cower from them or snap at them out of fear.

Over time, Ralph has made friends with the Best Friends veterinary staff as well, which makes it possible for him to receive the royal treatment and feel his best. He’s come to enjoy the laser therapy treatments he gets for some sore spots. When he goes in for his appointments, he dons a cool-looking pair of red goggles and then flops on the floor and waits for the healing treatment to begin. He’s also an angel for the monthly oatmeal baths he gets for itchy skin.

In fact, Ralph has become so good with medical handling that he’s been able to step into the role of hero. Sometimes, an emergency blood donation is required when dogs or puppies at the Sanctuary get sick, or a dog is rushed to the Best Friends Animal Clinic after a life-threatening accident. The donor needs to be a healthy dog of a certain size and weight in order to safely donate blood. He or she also has to have the right temperament to handle giving blood, and generally, that turns out to be a dog who won’t stress out or require sedation. Ralph fits that description to a T.

Ralph has come far enough in conquering his fear of new people to sit calmly through a dog blood donation procedure. But if Ralph has one thing, it’s true bravery. And because he has it, Ralph has helped to save the lives of several Dogtown residents — including a litter of puppies with parvovirus, and several other patients in the Best Friends Animal Clinic.

Ralph’s bravery isn’t well-known beyond Dogtown. He’s more of a quiet hero. But his friends make sure he knows how special he is. When he does donate blood, he gets fluids and high protein foods to keep him healthy and strong. He gets some extra love, too, though his caregivers agree that like every dog at the Sanctuary, Ralph gets star treatment all the time. “We spoil him pretty good,” caregiver Carissa Hendrick says.

Now that he knows true love and understanding, Ralph is a different dog from the frightened, defensive guy he once was. “He’ll throw himself on the ground for belly rubs and sit in a chair behind you when you’re on the computer,” says Dogtown groomer Alyssa Hill. “He also does this funny little tap dance to ask for treats.” He likes to dress up in T-shirts and bandanas, and to be wrapped up in soft blankets and snuggled.

Aside from his lifesaving bravery, the fact that Ralph has given his trust and can be trusted in return makes him truly heroic.

Bring hope and healing to more dogs like Ralph 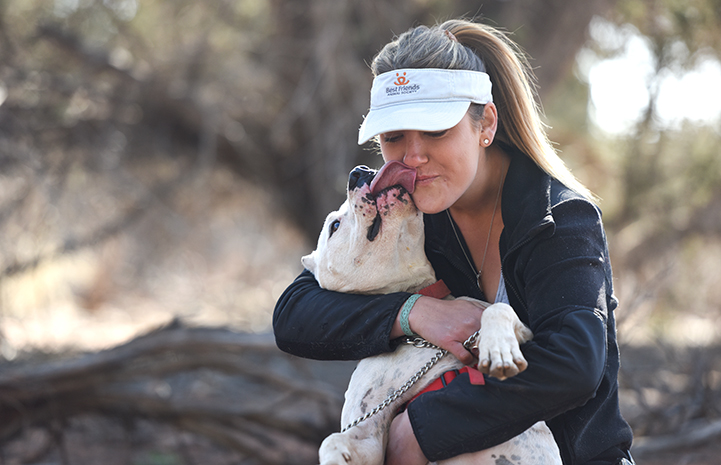