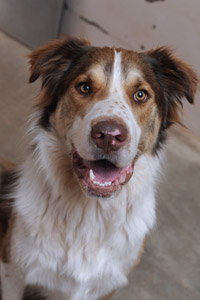 Three-year-old Boo looks like a big, cuddly teddy bear. And he is. But beneath his fuzzy exterior, there is amazing strength and resiliency. One would never guess that the big, strong dog was quite a sickly pup. Separated from his mother far too young, he became critically ill with parvovirus at only 21 days old. As if that wasn’t enough, before he was even two years old, he ran into more health problems that put his life at risk.

Just over a year ago, Boo started having trouble using his back legs. While hind-end weakness is not uncommon in older dogs, Boo was far too young to be having age-related issues. The diagnosis – hip dysplasia and degenerative joint disease – was life-changing; Boo’s person was unable to financially support his special needs and even considered euthanizing him. A rescue group stepped in to save the young, vivacious dog from that fate, and turned to Best Friends for help.

So Boo came to the Sanctuary, where he gets a combination of supplements and injections to ease his pain. And the great news is, the treatment is working so well that he’s been able to avoid surgery. Instead, Dogtown caregivers make sure that Boo gets plenty of good old-fashioned (but low-intensity) exercise to keep his joints moving and his muscles strong.

Boo just loves going for long, leisurely walks with caregivers and volunteers. The deep, red sand on the trails that run through Dogtown provide a good workout while being easy on Boo’s delicate bones and joints. And people are happy to take him on those walks, because he’s a perfect gentleman on a leash. No pulling, tugging or “off-roading” necessary. 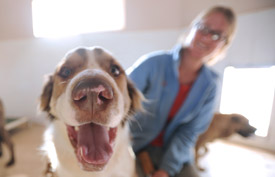 Once he’s exercised, Boo has plenty of time for fun and games. Squeaky toys are his favorite, and he particularly likes the ones designed for dogs much smaller than he is. He’ll stick his big head into an overflowing toy box, and pull up the smallest squeaky he can find in there.

Because of his happy-go-lucky nature, the friendly dog has become a favorite with Sanctuary volunteers and has been on at least five sleepovers. He’s been described as a “total couch potato,” a “kissing fool," and a “gentle giant,” as well as sweet, loving, and a joy to have around.

Nothing is more exciting to Boo, however, than rides. If he sees a car with an open door, or a golf cart, you’d better believe he’s ready to go. It’s just part of his exuberance for life, an exuberance that never wavered despite the hardships he’s faced.

Great news! As we were finalizing Boo’s story, he found his forever home.

To learn more about all the dogs at the Sanctuary, click here.