German shepherd abandoned at airport is helped through networking

Image
United Airlines, Best Friends, and Humane Animal Treatment Society help save Bax the dog who was abandoned at an airport in Detroit.
By Denise LeBeau

Having worked in animal welfare for years, Michelle Logan, a Best Friends No More Homeless Pets Network specialist, has heard many tales of pet abandonment, but the story about the beautiful black dog was still a tough one for her to hear. Bax, the German shepherd, hadn't been dumped in one of the usual ways. He had been left at the airport in Detroit, Michigan, like a piece of unclaimed luggage.

Luckily for the loving fellow, the matter was brought to the attention of Fran Cervantes, PetSafe product manager at United Airlines. Fran is not only an animal lover but also a fan of Best Friends.

"Last May, I had the pleasure of visiting Best Friends Animal Sanctuary and did some volunteer work there," shares Fran. "That's what prompted me to reach out and ask for help when we were trying to find rescue for Bax."

United Airlines is committed to the health and safety of all their passengers, including animals. The airline employs PetSafe, a specially designed program for transporting animals that are not eligible to travel in the aircraft cabin.

Lifesaving connections for Bax the dog 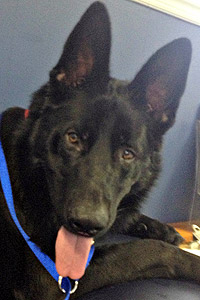 As soon as United Airlines realized Bax was officially abandoned, they started the process with Best Friends to attempt to find a no-kill rescue facility that would ensure he would find a loving home. Fran says, "After (he traveled) cross country and then (was) kenneled for two weeks, we wanted to get him into a stable environment as quickly as possible. All our employees, and the staff at the kennel (where he was boarded while waiting on placement), wanted to make sure he was safe. This poor animal had already been through a lot."

The request for help for Bax was routed to Michelle. Michelle works with our No More Homeless Pets Network partners to help support their no-kill goals through marketing promotions, grants for programming, such as spay/neuter endeavors, and more. While she is usually busy helping our partners place animals, she couldn't turn a blind eye to Bax. So she reached out to some of our partner organizations in the area, and the Humane Animal Treatment Society (HATS) stepped up to the plate and opened their hearts to Bax.

It wasn't long before HATS found a great home for Bax. "Bax, who has been renamed Hugo, was an absolute joy to have," says Summer Dubois, operations director at HATS. "He was your typical shepherd - very regal and intelligent, eager to please. This boy also had a very goofy side and loved to lie in the kiddie pool and chase the giant ball around the yard at his foster home."

"The resources that we have access to as a Network partner have allowed us to do so much in our community," continues Summer. "Best Friends has helped us place some of our long-term residents, sponsored spay and neuter clinics, provided valuable public education, and allowed us to connect with other organizations who are working towards our same goals, and compare notes to ultimately help as many animals as possible. Bax's happily-ever-after would not have been possible without the hard work of Fran and the United Airlines team, as well as the HATS staff, volunteers, donors and fosters that lent a hand to help him find his forever family."

"As the saying goes, 'Saving one pet won't change the world, but surely the world will change for that pet,' and that's what counts," says Fran. "Everyone that participated in this effort was just thrilled."

Support the work of our No More Homeless Pets Network partners. Click here to find in your community.