Globetrotting for the animals

Three and a half years ago, Sue Anderson from the United Kingdom hit a fork in the road of life. She found herself in a situation where she had to sell her personal business. Afterward, she wondered what next she should do with her life. She thought about buying or starting up another business, but she also had another idea. There were so many things she wanted to see and do around the world. Sue wondered if the time had come to accomplish a few of them. After considering options, Sue decided she would indeed head out for some traveling and check several of those items off her list. Well, it’s been a funny thing. Once she got started she hasn’t stopped since!

Many people want to travel the world, but few do it the way Sue does. "Animals are my passion," she explains. So when Sue books a trip—usually an extended trip — she almost always has plans to volunteer helping animals one way or another while in town. Her first such trip three and a half years ago took her to a wildlife hospital in South Africa. There she stayed for three months, working every day to help the animals.

After that experience, Sue just kept on going.

Her travels since then have included six months in a donkey rescue in the Caribbean, three months at a chimpanzee rescue in Zambia, several different stops working with various horse rescues around the world, and recently six weeks at the wildlife area at Best Friends.

Sue visited Best Friends briefly last year and knew she wanted to come back. Amid all the animal rescue work she does around the globe, Sue also takes one trip a year with her father for sightseeing. Last year they chose to hike Zion National Park and Bryce Canyon National Park, both of which are close to the Sanctuary. While in the area, Sue and her father took a tour at Best Friends. After the tour Sue knew exactly where she wanted to volunteer next in her travels. 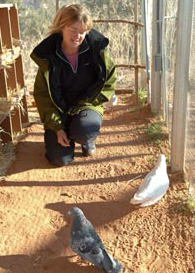 She showed up at Wild Friends, the wildlife part of the Sanctuary, ready to roll up her sleeves and help. Boy did they put her to work! "She had great energy from day one," explains wildlife caregiver Bobbie Foster. Lucky for Sue, who likes to stay busy, the folks at Wild Friends had a long list of projects ready for her to tackle. Between all the normal daily care routines for the animals at Wild Friends, there isn’t much time for the regular caregivers to tackle large special projects. Sue, however, cruised her way through almost the entire list. She was willing to do anything from removing and replacing aging wood to repairing wire for play areas. Five days a week she showed up eight hours a day, giving of her time and talents.

Among other highlights to her stay, one that really stood out for Sue was meeting Snitch the mink. "I had never seen a live mink before," Sue says. "I really like Snitch."

During her stay at Wild Friends, Sue ended up with a priceless souvenir. After Sue got to know the brilliant resident artist geese Kayenta and Nemi, who took top prize in the Best Friends animal art competition this year with their joint entry, Sue simply had to go online and bid in the auction for their masterpiece. Sue won the auction and now has a one-of-a-kind memento from this stop in her travels. Who needs postcards when you can have an original piece of modern art?

The staff from Wild Friends were so grateful to all she accomplished that they threw Sue a huge goodbye party. Except it wasn’t goodbye forever. When asked if she planned to make her way back to Best Friends and volunteer again, Sue didn’t have to think twice. "Oh yes. I’m hooked!" Up next for Sue is a visit to Nepal with her father, then she has plans to volunteer at a chimpanzee rescue in Spain. While Sue doesn’t always know exactly where she’ll be headed month to month, she knows wherever she ends up there will always be animals who need her.

Volunteering at Best Friends is a greatly rewarding experience. If you're looking for a "reward," check out our volunteering tips.