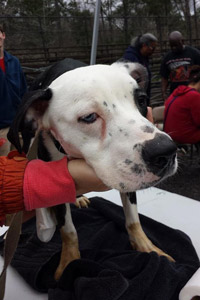 Iris, a sweet black-and-white pit bull terrier mix, with one blue eye and a sprinkling of freckles across her muzzle, wasn’t emaciated or abused, but it was clear from her condition she wasn’t getting proper care. She could be considered a typical pet for the area of Georgia where she lived; she was un-spayed and living with six other dogs who were also not spayed or neutered. Her situation is common to pets living with people who don’t have access to services they can afford. But considering the fact that 9,000 animals die in America’s shelters each day, the situation is far too serious, especially for dogs like Iris, to continue unchecked.

To quell the number of animals entering the shelter in Dallas, Georgia (the area where Iris lives), a group called Friends to the Forlorn Pitbull, Inc. (FTTF) helps people get their pets spayed or neutered. The group is a formidable force in reducing shelter deaths in their community. Run almost entirely by volunteers, they’ve adopted out over 160 dogs and provided about 1,200 spay and neuter surgeries since they began five years ago. FTTF holds an annual spay/neuter event called Beat the Heat, where hundreds of people get vouchers to have their pets spayed or neutered, but they wanted to be able to expand their reach even more, and that’s where Best Friends stepped in to help.

Best Friends shares resources through the No More Homeless Pets Network, a Best Friends program that works with rescue organizations and municipal shelters across the country to end the killing of dogs and cats in our nation’s shelters. As a Network partner, FTTF was eligible for funds to help them make a bigger impact where it was needed most. 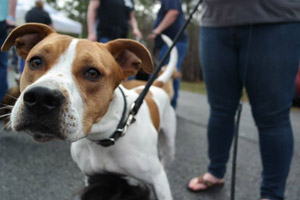 Laura Handzel, Best Friends legislative lawyer, says, “I was so impressed by their work; their volunteers are so dedicated, and I knew they would maximize their financial assistance to spay and neuter as many pit bull terriers as possible. They work with (dogs) who are among the most at risk in shelters, and they use their resources strategically.”

The group’s efforts had already made a big impact. In the months after their first Beat the Heat spay/neuter event, the county reported a 23 percent decrease in the number of animals entering the shelter. After the second event, there was a decrease of 17 percent. With high hopes for a big turnout and $12,000 in funding from Best Friends and a private foundation, FTTF planned, advertised and prepared for Beat the Heat III.

On March 29, over 700 people flocked to Beat the Heat III to get free pet food and supplies, and vouchers to have their pets spayed or neutered and vaccinated — for free. One of those pets was Iris, who arrived at the event in the back of her family’s pickup truck. “Iris didn’t look healthy,” says Lori Ragan, a volunteer with FTTF. “We offered to take (Iris) into FTTF.” Her family agreed, and Iris is now getting the medical attention she needs.

Best Friends was thrilled to provide funding for Beat the Heat III, which was the largest event FTTF has had to date. Best of all, Lori reports, “We’re now working with Iris’s former family to get all their dogs spayed and neutered and educate them on how to take better care of their dogs.” It goes to show that a little help and caring goes a long way toward keeping pets healthy, in their homes, and out of shelters.

Read more about pitbulls and get an overview of pitbull facts and myths.