Image
Article spotlighting stories of guys who have adopted cats. These real men have no problem embracing their true love of felines as pets.
By Nicole Hamilton

Ask any woman who lives with a cat if she’s familiar with the term “crazy cat lady,” and she’s likely to roll her eyes. Sure, she’s heard it before. And she also knows the truth: There’s nothing crazy about loving cats (some may say you’d be crazy not to).

Why should girls have all the fun, anyway? Who wouldn’t want a companion with a reputation of being low maintenance and laid-back, fun-loving, yet elegant? Cats fit the bill for anyone looking for that kind of pet, which is why men and women both find love at Best Friends pet adoption centers from coast to coast.

Here are just a few of their stories.

Quintin with Norman, adopted from Best Friends in New York

Quintin lives by the New York minute. As a young professional in the big city, he’s often up as soon as the sun rises and doesn’t come home until the stars are out. But just because he lives a busy life doesn’t mean he doesn’t have time for a pet. He just needed the right one.

That’s how he came to meet Norman. The one-year-old cat had made his way to the Best Friends Pet Adoption Center in New York from Animal Care Centers of NYC, and when he arrived, he immediately began bounding around the cat adoption room like the young fun guy that he is.

When Quintin met young Norman one day at the center, he loved how personable he was. In fact, as soon as Norman saw him, he stretched his arm out and put his paw on the glass — his way of saying: “I’m so glad you’re here. Now, when do we go home?”

Norman did go home that day — to a sweet Manhattan apartment that he now shares with Quintin and his roommate. He loves watching TV with the roommates, and he livens up the place with his joy of chasing anything in his path when he’s ready to play. 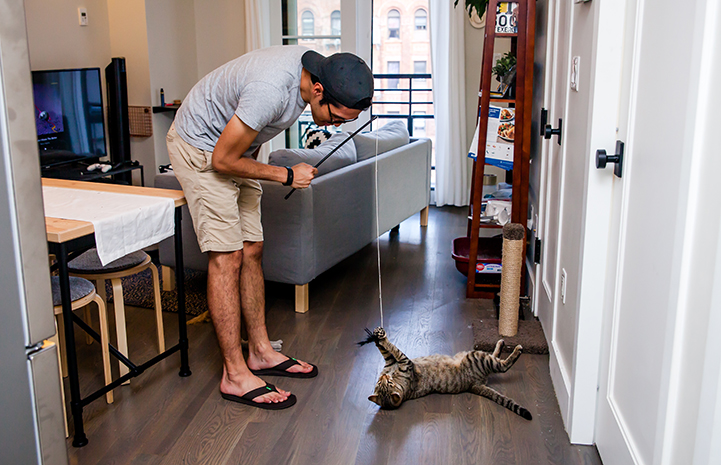 “He knows he’s the king of the castle,” says Quintin, with Norman sprawled out in the middle of the living room floor. “He’s great with our friends, and even though he’s very playful, he knows when to be calm and relaxed, too. He’s a smart cat.”

Life in the Big Apple can be exhausting, and every evening when Quintin returns home energy-zapped from subway rides and long meetings, and Norman is waiting happily for him (and maybe some catnip), he knows he made the right decision to adopt a cat. 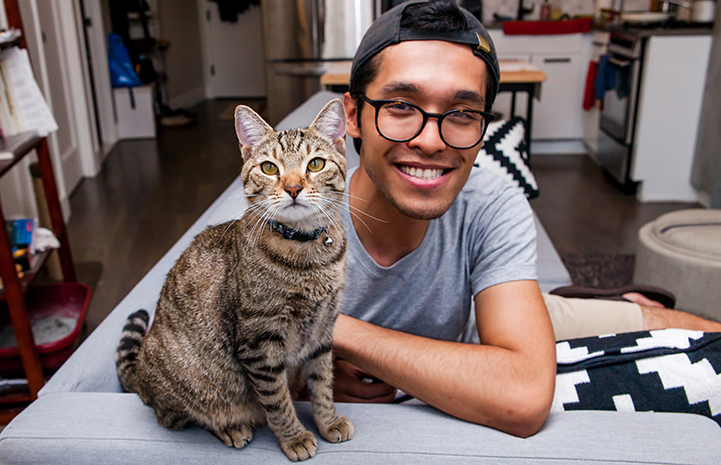 Tim with Crash and Professor X, adopted from Best Friends in Los Angeles

Like a lot of us, Tim likes to settle into the couch with a cold beer after a long day. And when he does, his cats Crash and Professor X are right there with him (although they stick to water). “I love my cats,” says Tim. “They hang out and watch South Park with me. We’re buddies.”

Tim adopted his two cats from the Best Friends Pet Adoption and Spay/Neuter Center in Los Angeles about three years ago. Both cats came to the center from Los Angeles Animals Services. In fact, Crash came arrived after being hit by a car and was taken to Best Friends where he’d get needed medical attention and the time to recover and be ready for adoption. Today, Crash has made a full recovery. 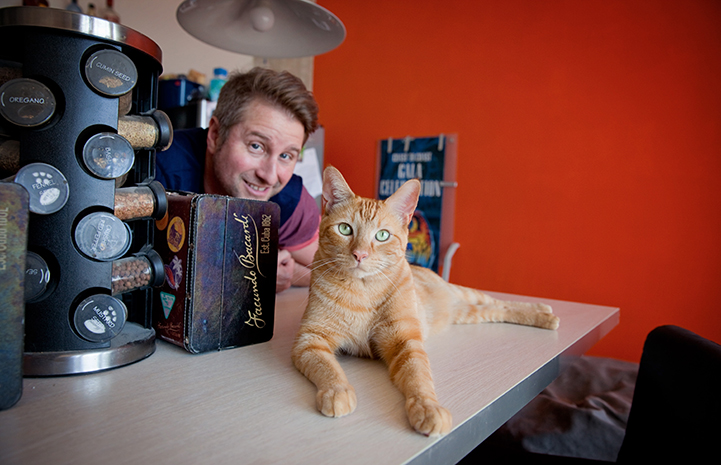 As soon as Tim saw Crash, he knew he would adopt him. And as he walked around the adoption room with Crash perched on his shoulder, he also made the acquaintance of Professor X. “I put Crash down to meet him, and knew I had to adopt both of them.”

It didn’t take long for the cats to adjust to Tim’s schedule. As an actor, he’s often gone for several days, but Crash and Professor X take it in stride. They’re fine with the cat sitter, and hold zero grudges when Tim comes home after being away. They’re just glad he’s home, so they can hang with him on the couch again.

“The stigma of being female and having cats is so silly,” says Tim. “Cats are great, and they’re perfect for people like me with crazy schedules. They can add so much to anyone’s life.” 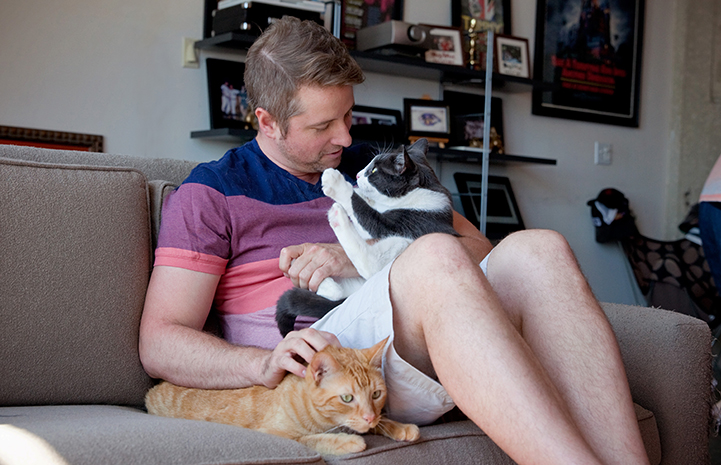 Jay with Zazu and Bender, adopted from Best Friends in Atlanta

Jay was pretty broken up after his cat passed away unexpectedly last year. He wanted to give himself some time before bringing a cat into the house again — out of respect for his former cat, as well as his heart, which was slowly on the mend.

Fast forward to a couple months ago. That was the day Jay announced to his wife, Nehy, that he was ready to adopt a cat. And this time he said they didn’t need to stop at one. If they visited the Best Friends Pet Adoption Center in Atlanta and came home with two, well, that would be fine, too.

Sure enough, during their visit to the center Jay and Nehy met two kittens, abandoned brothers brought to a municipal shelter before coming to Best Friends. “I took one look at them and knew they needed us,” says Jay. “I fell in love pretty quickly.”

They adopted the two kittens that day and named them Zazu and Bender. And today, the guy who had never lived with kittens until now is enjoying every moment. “They’re just the greatest,” says Jay, who is the primary kitten caregiver of the house. “These two just really touched our hearts.” 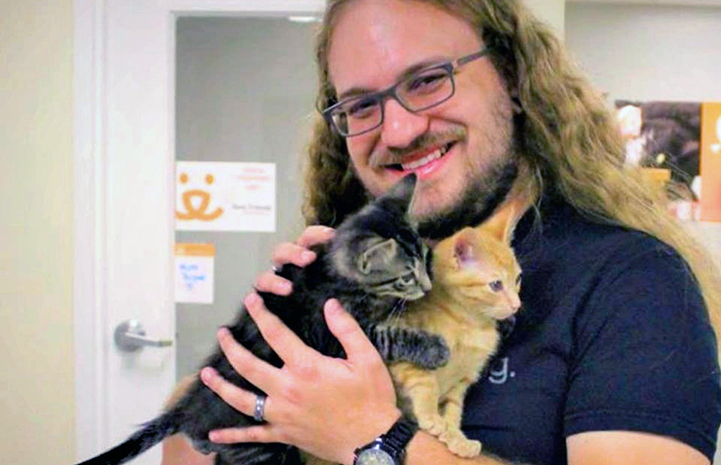