More about Halle from adopter Traci:

What has surprised you most about Halle?

Her sense of humor! One time, she got up at night like she needed to go outside and went to the top of the stairs to wait for me. As soon as I got there with my eyes half open, she ran back and jumped back into bed in my spot (which was already warm). She actually closed her eyes and pretended to be asleep, but couldn't keep from wagging her tail. I actually thought that was so funny and clever I let her keep the warm spot and climbed in on the other side. 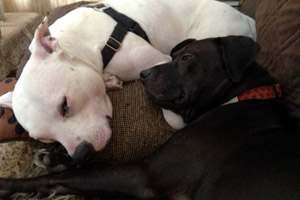 She loves other dogs. She has two brothers and is constantly playing with them. One of her brothers has a neurological injury from abuse as a puppy, and from the time we adopted him, he really took to the other dogs. He climbs on Halle, sits on her, lies on her, bites her back legs when he wants to play, sometimes plops down right on top of her and falls asleep, and she never once has gotten mad at him. I can take her anywhere, and as soon as she sees another dog, her tail begins to wag and she does a little happy dance.

Sit and shake hands for a treat. Her second favorite thing is to run through the house and have Jagger (one of our other dogs) chase her. 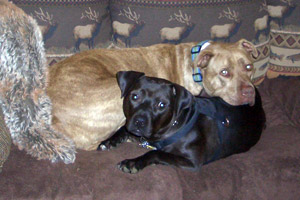 She has really changed my life. I had a lot of people try to talk me out of adopting a "dog like that," and I never listened for one second. Through positive reinforcement training and an awesome trainer, I watched Halle learn to trust again and overcome a lot of fears. When she first came home, she would pancake to the ground and shake whenever I took her to a new place or introduced her to a new person. Now she will sit on the couch next to a stranger and paw at them so they will pet her. She allows kids to hug her. She has taught me great lessons about resiliency, forgiveness, and unconditional love.

What do you think people can learn from Halle?

No dogs should ever be given up on just because of their past. I look at Halle and the other Vicktory dogs who are thriving in new homes, living with other dogs and even small children. Through a lot of love, patience, and the right kind of training, these dogs really can overcome the past abuses they have endured and make wonderful pets and companions. I would not trade the experience of adopting Halle for anything. It is because of her and the other pitties I have adopted that I have started working with a local pit bull rescue in order to educate the public about this breed. There really are no bad pit bulls, just bad owners. The people who have known Halle from the beginning and then see her now have seen how much progress she has made and have seen firsthand how much she has grown and overcome.