Help and a new home for a dog with mange

Image
Shelter dog with a serious case of demodectic manage receives treatment -- Bravecto, medicated baths, antibiotics and Benadryl -- and is then adopted.
By Nicole Hamilton

If you visited the DeKalb County Animal Services shelter in Atlanta when a dog named Rosie was there, you couldn’t have missed her. Rosie is a perennially happy dog who always looks like she’s smiling. She’s also got a wiggly body and a tail that wags whenever she turns a stranger into a friend, which happens all the time.

She has an unforgettable spirit, for sure, but that’s not what would have turned your head in Rosie’s direction back then. Those days, what would have caught your eye was the sight of her pink skin and almost hairless body, caused by a serious case of demodectic manage. 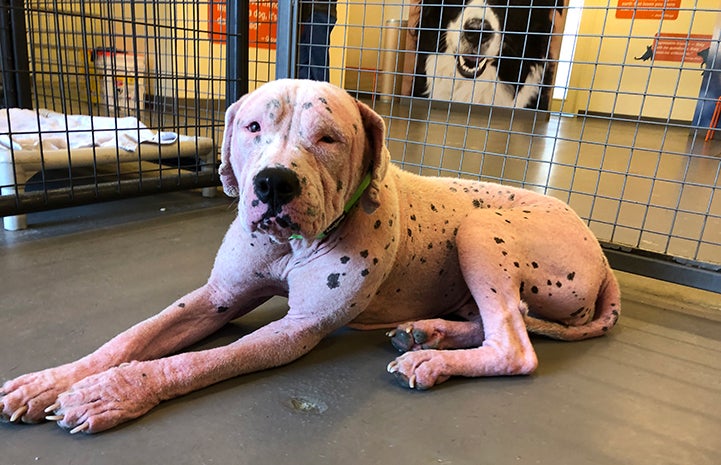 Treating a dog with manage

Demodectic mange is an inflammatory condition caused by demodex mites that results in itchy skin, sores, scabs, reddened skin and hair loss. Demodectic mange, unlike sarcoptic mange, is not contagious to other dogs or people, but it can take months of treatment before a dog is cured. And that requires more staff time and resources than most very busy shelters can provide. But there was good news ahead for Rosie.

Best Friends works closely with the DeKalb shelter in an effort to take the Atlanta area no-kill, and that’s why Rosie was brought to the Best Friends Pet Adoption Center in Atlanta. There, the sweet dog could get the time and medical attention needed to cure her mange and help her find a new home. 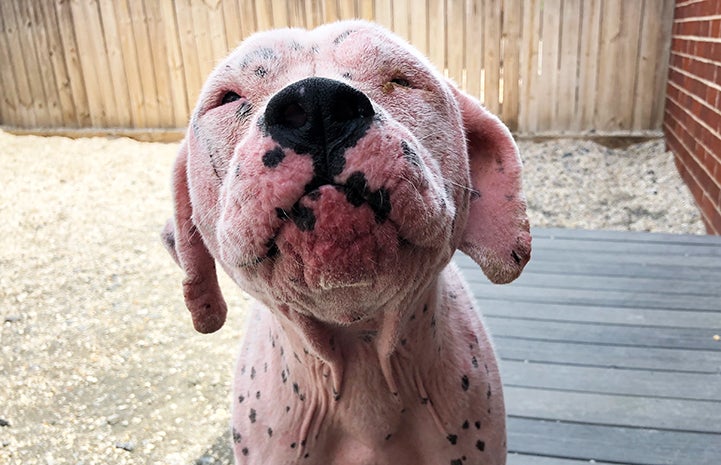 By the time Rosie arrived at the center, she had lost all of her hair. And while she remained the kind of girl who sees life through rose-colored glasses, she did so in painful, itchy skin. “Rosie was so sweet and friendly with people and other dogs,” says Kathleen Delaney, the center’s behavior and training coordinator. “She was open and trusting of everyone, despite being uncomfortable and itchy.”

Rosie’s mange treatment began as soon as she settled in at the center. Not only did she take Bravecto, an oral medication typically prescribed for mange, but she also was given medicated baths twice a week and antibiotics for two weeks. Benadryl, which rounded out her medication routine, helped manage her painful itching.

Proof that beauty is not only skin deep 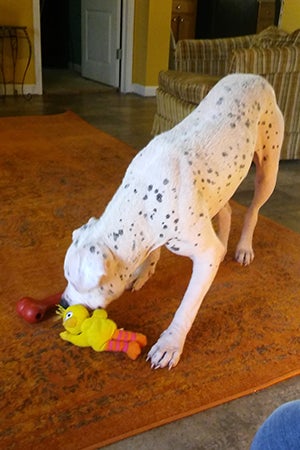 While Rosie was healing from mange, about two hours away in Boaz, Alabama, Wendy Jacks was looking online for a dog to adopt so she could do a little healing of her own. Ever since she’d lost her dog, Bailey, she’d felt a little lost. “Guilt, remorse, grief — you name it, I’ve gone through it,” says Wendy. “There was just a huge gaping hole I couldn’t fill.”

Just like Rosie, Wendy’s previous dog was being treated for mange when Wendy met her. “She was the most pitiful, unattractive dog in the place,” she says. “Yet, I loved her. She became my best friend. She was great with my kids and other dogs. She was perfect in every way.”

When Wendy saw Rosie on the Best Friends in Atlanta website, she took one look at her pink skin and knew exactly what she was looking at.

Soon after seeing that photo, Wendy and her husband, Kenneth, took trip to Atlanta to meet Rosie. At the center they saw Rosie’s condition up close. “Her skin was truly rose colored, with no hair and scabs,” says Wendy. It was clear Rosie still had a way to go before being cured, so Wendy and Kenneth left that day without her, to think things through.

Wendy planned to give it 24 hours before she made a decision about adopting Rosie. But on the way home, she couldn’t stop thinking about her. That’s when she knew she was ready. Kenneth agreed, and the next day, they returned to Atlanta and adopted Rosie.

Life after mange is good

Today, Rosie (now called Kayan) has a new name to go with life in her new skin. Her hair is growing back and she has become good friends with the family’s two small dogs and two cats. “She has to be the center of attention,” says Wendy. “And she thinks she’s a lap dog.”

Wendy says it’s hard to put into words how much her life has changed since adopting Kayan. “We love her,” she says. “You can tell someone spent a lot of time with her. She’s used to being loved and I am more than willing to continue that practice.”

Donate to Best Friends and help dogs like Rosie 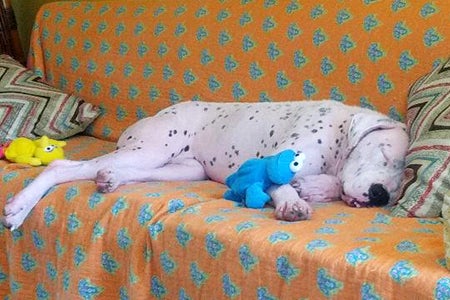