A senior Arabian horse who was living as a stray gets excellent care and finds new purpose at Best Friends Animal Sanctuary.
By Christelle L. Del Prete

Things weren’t going so well for Walter, an older Arabian horse, before he came to the Sanctuary. The poor horse was trying to fend for himself as a stray. But he clearly wasn’t used to living on his own, so he wasn’t having much success as a “wild” horse. Walter was starving, ragged-looking and in pain. Luckily, he was rescued by a livestock officer who helped bring him to Best Friends.

Walter arrived at Horse Haven just in time. At 24 years old, he was not only a senior, but also a “high-mileage” horse who was in desperate need of help.

Walter had suffered a lifetime of damage to his feet and knees, including lumps, bumps, bowed tendons and arthritis that made him limp around and moan in pain with each step. He was also extremely malnourished, underweight and hungry.

Horse Haven caregivers immediately started working to restore him to health. They began re-feeding him (a process of safely getting malnourished horses back up to a healthy weight). He also had his sore feet trimmed, and began getting laser treatments to relieve the soreness in his legs and knees.

By the time Walter began packing on some much-needed pounds, his legs were strong enough to carry his weight, and he was far more comfortable on his feet. 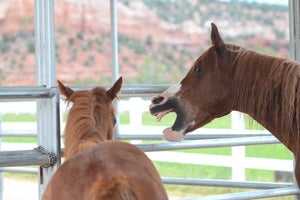 Some of Walter’s conditions (like the bowed tendons) aren't curable. But with ongoing treatments, his pain is being very well-managed. And now that he’s getting the care he needs, he’s feeling much better.

In fact, he’s doing so well that he’s found a job in Horse Haven, taking a young, special-needs horse named Spirit under his wing.

Walter has become “Uncle Walter” to Spirit. Like any good role model, he’s teaching the younger horse manners and boundaries in a gentle and loving, but firm way. Though he’s never unkind or aggressive, Walter (who has been there and done that) doesn’t let the spirited youngster (who looks like a smaller version of him) get away with much.

Instead, he’s teaching him how to be a civil little guy so that he can thrive in polite horse society, says Horse Haven manager Jen Reid. 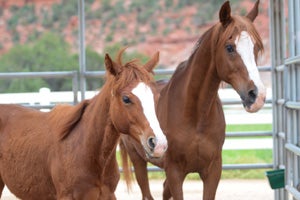 Walter has turned out to be exactly the father figure Spirit needed. He knows that his young friend needs to experience the world to build his confidence, and he’s happy to let him do it. Unlike most horses, Walter doesn’t stress out when Horse Haven trainers come to take his herd mate on a walk or a training session. He just waits calmly in the pasture for his student to return. Walter’s serenity, in turn, helps Spirit stay calm, too.

In becoming Spirit’s mentor, Walter has taken on an important role. But now that his hard times are behind him and he’s helping to mold and shape a young horse into a good citizen, he’s also being rewarded with a fresh start and new sense of purpose in his golden years.