Image
Discarded, unloved cat is saved when someone takes the time to help.
By Denise LeBeau

Helping homeless pets can be challenging. Figuring out exactly how to help is often the biggest hurdle. This story shows, though, that one person can make a difference in the life of a homeless pet.

Living in an area with a lot of free-roaming cats, many of them indoor/outdoor house pets, Troy Lea wasn’t surprised to see a cat darting around outside her home from time to time. But she was surprised when one evening, she saw eyes peering through the blinds. She recognized them; it was the brown tabby blur recently making the rounds. With temperatures dropping to 20 below on many nights, Troy made a shelter out of Styrofoam coolers and placed it next to a food bowl and heated water bowl outside. Troy set out to win the evasive cat’s trust, figure out where he came from, if possible, and above all, do what she could to help the cat. 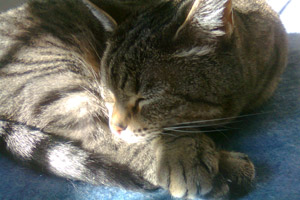 For almost a week, every evening after work Troy bundled up in winter gear, set out the cat’s food and waited. She upped the ante by bringing out cans of tuna fish. A turning point came when one night the cat holed up under a car and stayed put while Troy talked to him. He wasn’t ready to be snuggle buddies, but it was a start. Getting a better glimpse of him, Troy saw he wasn’t emaciated, but did look neglected.

One day, the cat dashed away and Troy followed. The cat went into someone’s backyard and disappeared. She knocked on the front door.

“The people said they knew whose cat it was; technically it was theirs,” says Troy. “They said his name was ‘Cat,’ and that he had been left behind by their daughter. They also said they didn’t really like him. I let them know I was feeding him and giving him shelter.” The cat’s family let Troy know that what happened to him didn’t matter to them. Troy went home with new resolve to befriend and help the cat.

More tuna and treats turned the tide. Now when Troy was outside, the cat would run over. She tried catching him in a humane trap baited with tuna. No dice. She started feeding him in a cat carrier. The day he walked in standing tall, evoking confidence, she closed the door behind him and waited for the hissy fit. This cat, full of surprises, was fine with being in the carrier and spent that night in Troy’s bathroom, separated from her special-needs pets for everyone’s safety. 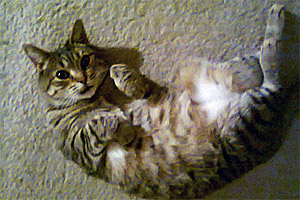 The next day, Troy dropped the cat at her veterinarian to be neutered and tested for feline leukemia and the feline immunodeficiency virus. He checked out fine except for needing a teeth cleaning. When Troy went to pick him up in the evening, she was further delighted when the vet technician said she was looking for a cat to adopt. The potential adopter took photos and went home to her family. When she showed the pictures to her parents, her dad said, “I had a cat who looked just like that; his name was Sammie.”

“Cat,” now named Sammie, spends his days as a lap cat on his grandpa’s knee, basking in love that only a family can provide. When his new mom comes home, he runs right to her.

“Sammie was left outside and no one cared about him, but now he won the jackpot. That’s why I do what I do – it’s the best feeling in the world, and anyone can do it,” says Troy, who has worked at Best Friends for over 15 years. She has supported countless others in rescuing animals, but Sammie’s story shows why she’s happy to do the work herself, too. Troy says, “There’s nothing better for the soul than rescue. Knowing Sammie is cherished in his new home makes me feel euphoric.”