Breeder dog who suffered abuse on a ‘puppy farm' receives TLC and training at the Sanctuary and is learning how to just be a dog so she can be adopted.
By Christelle L. Del Prete

In the classic comic strip “Peanuts” by Charles M. Schulz, the Daisy Hill Puppy Farm, where Snoopy was born and raised, was a pretty great place. Charlie Brown’s talented beagle grew up on a spacious farm where he got to romp around and enjoy delicious meals with his family. He got to chew on dog bones and generally live a great life until someone brought him home.

A breeding-for-profit operation for dogs

In the real world, a puppy farm (more commonly known as a puppy mill) isn’t a happy, fun-filled place. It’s a breeding-for-profit operation for dogs. In puppy mills, dogs live in small cages, and female dogs are bred as frequently as possible. Life in a puppy mill is pretty miserable for a dog. Gerta, a miniature schnauzer mix, knows this all too well. She began her life in a puppy mill in Missouri and stayed there for years.

Luckily, Gerta was rescued from a life of producing litter after litter of puppy mill puppies. She came to Best Friends through a local rescue group, but the poor schnauzer mix had never known anything but the inside of a cage and was terrified of the world and everyone in it. She didn’t know the first thing about being a pet. Worst of all, human hands seemed to completely panic her. It’s likely she had never enjoyed a gentle scratch behind the ears or a belly rub. 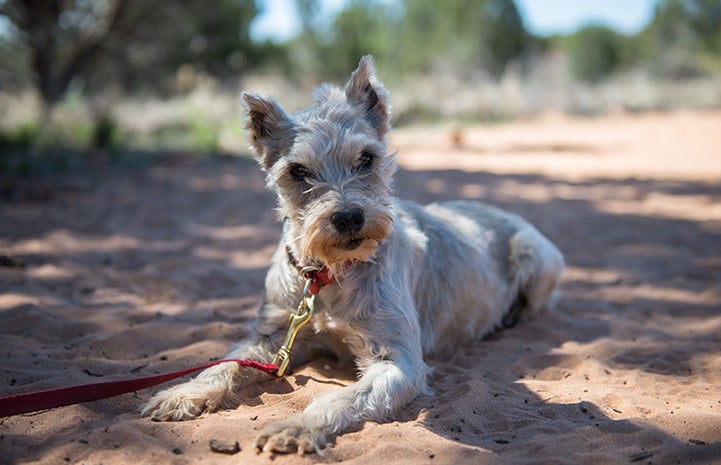 To prepare for a life as someone’s pet, Gerta was going to have to learn how to be a dog. And she’d have to start from the ground up. It would be much harder for her than any puppies she had in the past. Puppy mill breeders often sell puppies online, through classified ads, or supply them to pet stores. While those puppies leave the mill at a young age, dogs like Gerta stay behind to have more puppies. By the time she was rescued, she had nearly five years of puppy mill abuse to overcome.

Rehabilitating a dog rescued from a puppy mill takes time and patience, but it can be an incredibly rewarding experience.

Dogtown caregivers knew they had their work cut out for them. But Gerta’s future depended on getting her comfortable enough around people to begin building relationships with them. One thing that would make it easier was food: Gerta can’t resist a tasty treat, and she never passes up a meal. It seemed that the way to the scruffy schnauzer’s heart might very well be through her stomach.

Dogtown caregiver Tom Williams began by hand-feeding Gerta. Tom explains that hand- feeding is a great way to reward shy or frightened dogs for being brave around humans, while at the same time requiring them to make contact with people in order to get the reward. Gerta quickly learned that human hands weren’t scary, and that they could bring her yummy treats.

After being hand-fed by Tom for a while, Gerta decided she really liked her caregiver and that she wanted his company. She would sit and listen while he read to her, and over time she grew more and more trusting. Gerta was getting over her fear of people, but she still had a few other fears to face before she could venture out in the world: namely, leashes and stairs.

Once Gerta’s trust in Tom grew, he began getting her used to a leash. At first, he had to hold the leash a few feet away from her and hand-feed her at the same time. Eventually, Gerta let the leash get close enough to be clipped onto her collar. That was a big step, but it took several more months just for Gerta to feel comfortable having the leash attached to her. When she realized it wasn’t going to hurt her, the next step was to learn to walk on it.

Walking on a leash is strange and scary to a dog who’s lived her whole life in a small cage. But Gerta showed her caregivers that she wasn’t going to stop trying. “Gerta is a dog who needs a lot of patience, baby steps and starting over,” Tom says. “But if you let her go at her own pace, she eventually makes the decision to try new things and even has some fun doing them.”

The more she tried walking on-leash, the better Gerta got at it. Now, after a year of hard work at the Sanctuary, she can make it all the way from her yard to the Dogtown trail. To her, the trail with all its interesting smells is the jackpot. It’s her reward for being brave on a leash. 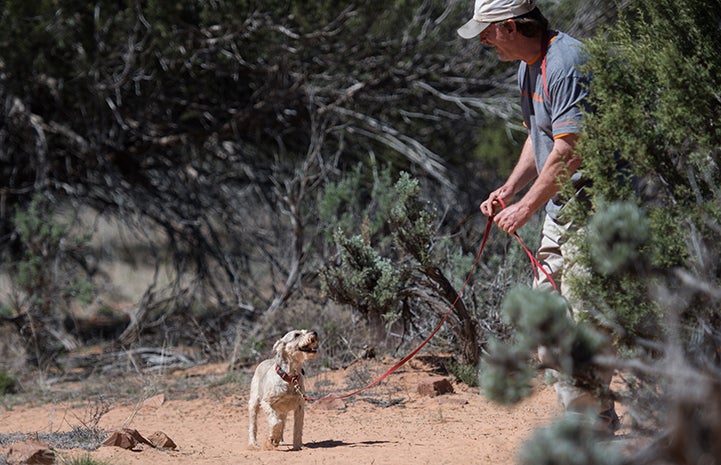 Gerta’s next challenge is learning to go up and down the stairs outside of her building. Once again, the puppy mill survivor is scared, but she is trying. “She is brave,” Tom says, “and it's great to see that she trusts me so much that I can put her in new situations and she knows she won't get hurt. I’m very optimistic for her.”

With the help of her caregivers, this once terrified puppy mill survivor is breaking through barriers and learning what she needs to know — to not only survive in the world, but also to make someone a wonderful pet. And while she’s learning, Best Friends will keep working to end puppy mills and to give more dogs like Gerta the chance to live happy lives and be loved.

Help bring hope and healing to more animals like Gerta 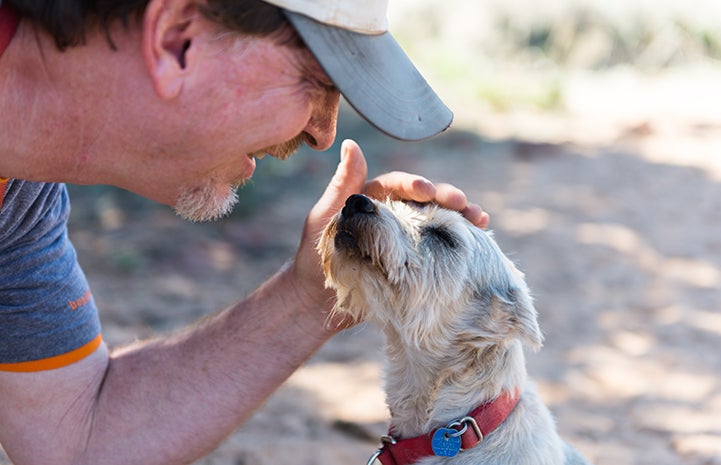