Helping Riley the cat with her pain

Image
Medical treatments ease Riley the cat's pain, which may be due to arthritis or an injury, and help her get along with other cats.
By Christelle L. Del Prete 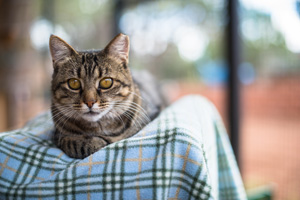 When Riley came to the Sanctuary a few months ago, she made it very clear that she didn’t want to be around other cats. At least, that’s how she acted. She would hiss and yowl at any cat who came too close. It was looking like Riley might have to live by herself at the Sanctuary and wait for one of those hard-to-find homes where she could be the only cat.

But Riley, who’d been abandoned before she came to live in Cat World, was showing signs that something else was wrong. Although she liked people and seemed to be affectionate with them, Cat World caregivers noticed that she didn’t want anyone to pet her back. She also had a wound at the tip of her tail that might have been caused by her biting herself repeatedly — possibly as a response to nerve pain.

A physical exam and X-rays at the Best Friends Animal Clinic revealed some bad news. At some point, the two-year-old tabby had either developed arthritis or suffered an injury. Although the cause of her pain would likely remain a mystery, one thing was clear: Riley needed some relief.

A course of nerve-blocking medication combined with laser treatments helped to greatly ease her pain. As soon as that happened, Riley stopped biting at her tail, and it began to heal. She also began to respond better to other cats — so much better, in fact, that Best Friends caregivers and vets suspected that her previous grumpiness might have been her way of telling other cats that she was hurting and needed some space. 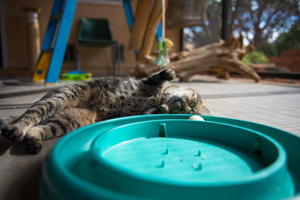 Living peacefully with other cats

Riley is now thriving in a room full of older streetwise cats, proving that she can peacefully coexist with other cats. If one of her roommates is pushy with her or gets too close, Riley might hiss, but she always walks away.

Riley may never be best friends with another cat, but she can live peacefully with them, and that changes everything for her. For Riley, getting along with others is good news, because it means she doesn’t get stressed out every time she sees another cat. It also opens up a lot more potential homes for her, since she won’t need to live as a single cat.

Since Riley landed at the Sanctuary she not only got help with her pain, but her reputation as a sweet, peaceful cat was saved.

Support our work to bring hope and healing to more animals like Riley.