Image
Foster failure story of a senior dog with puppy-like antics and loving disposition that ensured his foster family had no choice but to adopt him.
By Nicole Hamilton

Six days after Donna Satterlee brought a senior dog home from the Best Friends Pet Adoption Center in Atlanta to foster, she looked into his big brown eyes and knew he was there to stay.

She loved his unusual bark that made the neighbors take notice, the antics that left her and her husband Mike in stitches, and she even loved the way he chewed on anything he could find. But none of this should have been a surprise, because what else would you expect from a dog named Herbie the Love Bug? Just like the car in the movie Herbie has a mind of his own and a nose for mischief.

Herbie came to the Best Friends pet adoption center after the senior dog was found on the streets and brought to the Fulton County animal shelter. But as one of Atlanta’s largest municipal shelters, it’s crowded everyday with all sorts of dogs – many of them younger than Herbie – who need homes.

Herbie was brought to the pet adoption center so that he’d have as much time as possible to find a home. In a smaller center with fewer dogs vying for adopters’ attention, his magnetic personality on full display would be hard to miss. When he arrived, he made a lot of friends right away.

“Herbie is a senior with a ton of spunk,” says Nichole Dandrea, social media community manager for Best Friends in Atlanta. “It didn’t take anyone long to see that he is the silliest, goofiest little guy.” 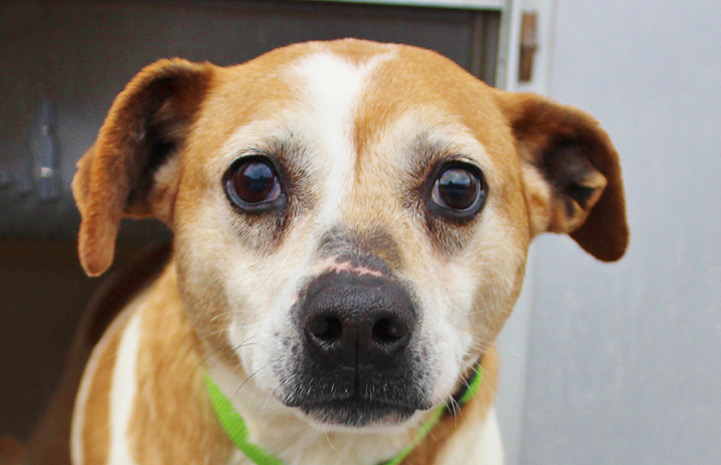 Donna fell for Herbie the Love Bug right away, but when she first met him at the adoption center, he wasn’t getting much interest from potential adopters. Rather than have him stay at the center, Donna agreed to foster him for a while. A change of scenery and life in a home would keep his spirits up while he waited for the right family to come along and bring him home for good.

Herbie wasted no time making himself at home. “The love bug part of his name is so accurate,” says Donna, who has volunteered at the center for years. “When I am on my love seat, he just springs up and joins me with lots of kisses and wet willies. And when he settles down, he will lay on my chest and fall fast asleep.”

Donna and Mike have been rescuing animals since they met in 1983. One Saturday morning, she was getting ready to take Herbie to a Best Friends adoption event. “Heck no,” said Mike. “That dog is not going anywhere.” Apparently, he also had been bitten by Herbie the Love Bug.

A couple days later, they made it official and adopted him. Herbie finally had a home where every day he could practice his goofy brand of joie de vivre. And the Satterlees had a dog who constantly reminds them that life is too good to be taken seriously.

Of course, love is not without its challenges. Even though Herbie is around nine years old, Donna and Mike still have had to “puppy proof” their home because Herbie has the habits of a much younger dog.

“He has so much energy and likes to explore everything,” says Donna. “His mission in life is to sniff everything outside. And, if there is something left on a table or other surface, Herbie thinks it is his duty to grab it and tear it apart.” Herbie will grab food when no one is looking, but Donna is teaching him to sit, stay, lie down, and how to walk on a leash. 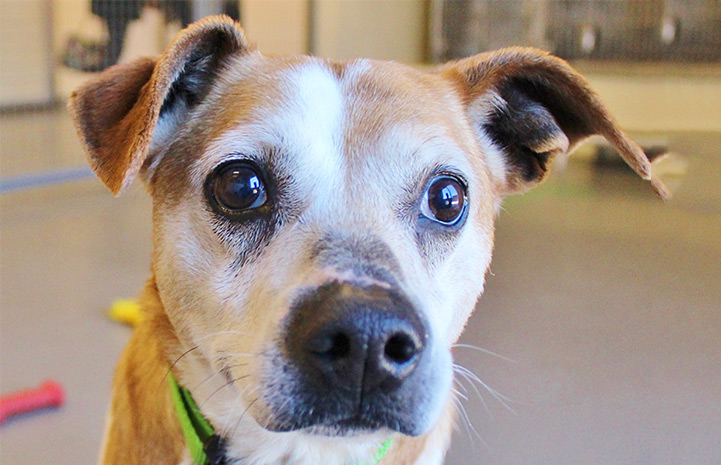 Recently, they discovered that Herbie is partially blind, due to a painless inherited condition that likely has worsened as he’s gotten older. Herbie also has separation anxiety, and will often cry when Donna goes out to walk her two other dogs, Roscoe and Butterscotch.

“I can hear him down the street when I’m walking,” says Donna. “When I get back home, it takes him a good five minutes to calm down. He is getting better, but we know it is going to take some time, which we will gladly give him.”

You can help make your community no-kill: adopt a pet near you

Bringing smiles to everyone he meets

Thanks to time and patience, Herbie’s old habits and anxieties are beginning to subside. But he’s still making everyone he meets chuckle and sees no reason to hide his love for his new family. Most nights he sleeps between Donna and Mike, with outstretched paws that often end up in Mike’s mouth.

“He has added another dimension of humor to our home,” says Donna. “Looking at him and watching all his antics makes us laugh. He walks around our house like he owns it in his cute little strut that he has.”

That’s because Herbie the Love Bug is a dance-like-nobody's-watching kind of guy, and some things you just can’t change.

Save other love bugs. Give to Best Friends.