Kent had a reputation for trying to get attention in all the wrong ways, but he had an endearing, clumsy side just waiting to come out.
By Lindsay Hutton 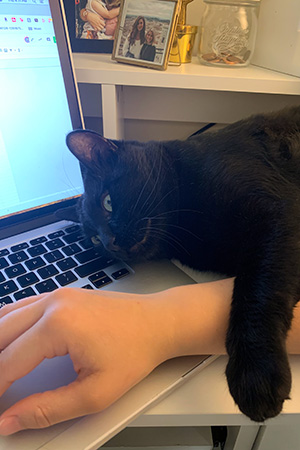 When the muscular, scruffy black tomcat arrived at Best Friends in Los Angeles, he was super friendly, but quickly became frustrated. Being close to so many other cats in a busy environment cramped his style. Even in a free-roam setting with room to stretch his legs, he let people know when he felt he wasn’t getting the attention he deserved.

“He’s a bit of a king,” recalls caregiver Natalie Culbreth. He expected everyone to be looking at him, responding to him. To get caregivers’ attention, he started latching onto their feet and legs with his claws.

Had he been a kitten, this might have been cute. But the king was no kitten. He was strong and weighed 12-and-a-half pounds. His name was Kent or, as Natalie nicknamed him for his big, swaggering cowboy walk and talkative nature, Kentucky. The joke was that he sang country and western to the staff each day. And while he had a bit of a reputation, Natalie could see that he was just a big, lovable cat ― and on top of that, a klutz.

Kent didn’t always land on his feet, like most cats manage to. “When you see this big, muscular cat who you know has had to take care of himself, you expect to see him move with power and grace,” Natalie says. “He moved with power, but no grace.”

When chasing a toy, Natalie says, he resembled a baby deer running after its momma, legs skittering sideways. When leaping down from the ledge of a catwalk, he landed on his butt. Kent was otherwise healthy, and his lack of balance was a charming part of his personality.

The challenge for those taking care of him and responsible for matching him up with a new family was to help him find a different kind of balance. “There’s so much stimulation: There are other cats, people, dogs and birds outside the window,” Natalie says. It was all exciting to Kent, and the way his pent-up energy came out was to grab onto people’s legs and feet. Caregivers had to help him channel his energy so potential adopters could see his sweeter side.

[What to do about an attention-seeking cat]

To help Kent and let everyone else see his goofy side, staff moved him into his own big, quiet empty room. There they taught him to redirect his energy using wand toys to shift his attention from moving feet to the toy. They made playing with the toy more rewarding and fun than latching onto people’s legs. 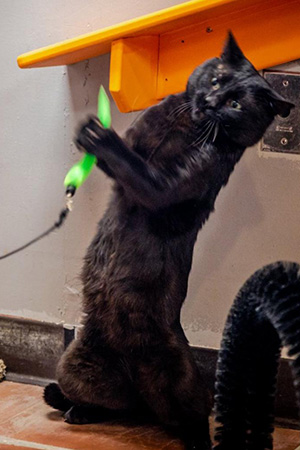 When staff entered his room to clean, they played with Kent for 10 minutes or so to help him burn off some of his energy. Anytime he would behave in a way that was “mouthy” or would try to grab on to someone’s shoes or legs with his claws, the caregiver would stop playing with him and leave. After giving Kent some time to cool off, the caregiver would return and finish the session on a good note, with more play and treats. He learned that playing helps relieve his frustration and that good behavior leads to treats and cuddles — two things he loves.

Teaching a cat to choose playtime over another behavior can be a long process, but intelligent and treat-motivated Kent learned fast. Natalie recalls the moment when she watched him choose play: They had just finished a play session when there was a loud noise from the street outside. Kent moved to nibble her arm but froze ― mouth open, reconsidering. He went for his toy instead.

After training Kent to direct his energy in a positive way, caregivers wanted to find him a playmate; however, he was rough around the edges when it came to the social rules of cat greetings (no social distancing for him). And so the choice of a playmate was made with care. They brought in a “bomb-proof” cat named Beethoven. When the two cats were introduced, Kent ran right up to this new potential friend’s face in a rather rude greeting. Beethoven gave him a hiss, a light swat and then went on about his business, cool and unruffled. He taught Kent cat manners, and they soon became great friends.

After Beethoven was adopted, Kent shared his room with a trio of wild black kittens. He loved them. He followed them around and allowed them to pounce on him. They were not as impressed with him, but that didn’t stop him from trying to get them to play. All of this only continued to reveal his royal awkwardness. He’d take off running to catch a toy or play with one of the kittens and trip over his own feet, rolling head over heels.

Confident in his new kingdom 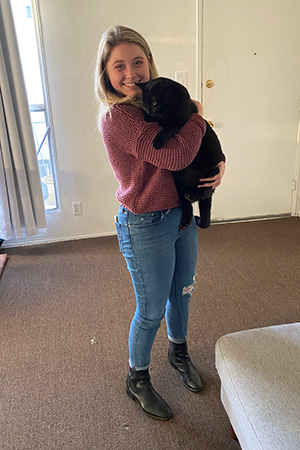 Gabrielle Keller says that the moment she saw Kent she knew she wanted to adopt him. She had her heart set on another cat, but when she saw Kent hamming it up, rubbing himself all over Natalie during the virtual meet-and-greet, she thought, “OK, I love this guy.” Seeing how friendly he was and how well he got along with the other cats reminded her of one of her childhood cats, Buddy, who was also an outgoing lovebug. She was won over.

Gabrielle and Natalie talked about Kent’s behavior and how to redirect his energy if need be. This didn’t worry Gabrielle. She was a little nervous about responsibility of caring for a pet because Kent would be the first pet she was solely responsible for.

Gabrielle’s family always had pets, and for her, having pets was part of having a home. She’d wanted to adopt a cat for years, and after her roommate was gone for two months visiting family, she decided that she couldn’t keep coming back to an empty house.

Kent walked into his new home like he owned it, a reflection of his kingly personality. Gabrielle says that adopting Kent is one of the best things she’s ever done. She says  that caring for him has helped her realize that “taking care of someone else helps you take care of yourself, too.” She feels that he’s helped her grow and become more responsible. And during some difficult times, Kent has brought love and laughter to her life.

Kent’s confidence and noble entitlement have not left him. He not only walked into Gabrielle’s apartment like he owned it, but he also walked into a neighbor’s second floor apartment through an open window. She had to “fish him out with treats” before the neighbor returned home.

Kent has a standing play date with another neighbor, who also has cats. Kent meows at the door, and Gabrielle escorts him to the neighbor’s apartment, where he plays until he is ready to leave, at which time he sits by the door and meows for the neighbor to take him home.

One morning as Gabrielle was eating an egg sandwich, Kent ducked his head under her arm and took a bite. He once stole spaghetti from her roommate’s plate at an opportune moment when her back was turned. Some mornings, because he’s hungry and wants her to wake up, Kent will playfully bite her hair.

Living with Gabrielle has changed Kent, too. He’s become cuddlier. Gabrielle says that he is still a playful, outgoing guy, but he has gotten more and more comfortable. For six months he inched closer and closer to her in bed at night, until he now snuggles under her neck.

The lovable, cuddly klutz who snuggles under Gabrielle’s neck is that same muscular, scruffy tomcat who had a bad reputation. But his human friends didn’t let that behavior define him. They helped him learn a better way to interact with people and other cats. And because they did, Gabrielle knew him at once for the outgoing lovebug he really is. 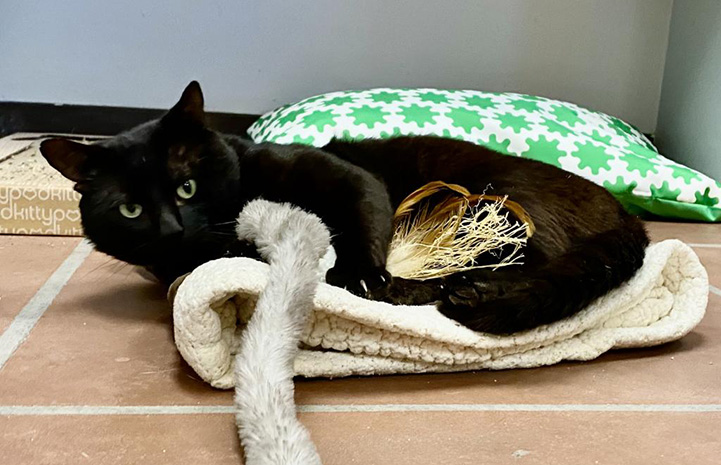 Endearingly clumsy or soft and graceful, there are countless pets out there just looking for someone to love them. That someone could be you