Image
The inaugural event in St. George finds homes for 115 fur-kids, like Millie, who just need a chance to shine.
By Denise LeBeau 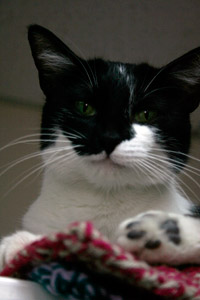 Millie had been waiting on her forever home since 2010. It was over two years ago in October that she was brought to Providing Animals with Support (PAWS) as an eight-week-old sickly kitten. During her time at PAWS, she grew into a healthy adult, who also overcame some shyness issues. Who knows why the beautiful, outgoing greeter cat was overlooked time and time again by adopters, but her luck changed big time thanks to PAWS' participation in the St. George Holiday Pet Super Adoption in Utah, sponsored by PetSmart Charities. Best Friends has been championing these super adoptions, where multiple groups come together to adopt out their lovable charges in a festive atmosphere, for over a decade. This event, held December 7-8, 2012, was another lifesaving winner by all accounts.

"We were doing a radio interview with Millie during the event, and before we finished, she was adopted by a family who was already there," shares Lynn Burger of PAWS. "We were thrilled. She is such a volunteer favorite who deserved to have her own home for the holidays."

Millie was one of the 33 cats that PAWS adopted out over the weekend. "We're one of the only cat rescues in Southern Utah," Lynn continues. "During kitten season, we have upwards of 80 cats so these types of adoption events allow us to place many cats, which opens up space so we can save more. Though, I have to say, I am shocked at how many people were lining up before the event even opened. I've never experienced anything like that at an adoption event before."

Aggie Smith, from Ivins Animal Shelter, was ecstatic at the results and wanted to share the story of Zoey, a pit-bull-type dog who was adopted at the event. While her suitors were lining up, she was able to be an ambassador for her breed. A man was interested in her, but his wife was hesitant, so they wanted to talk it over before making the commitment. By the time they came back, having assuaged the wife's concerns over living with a pit bull terrier, Zoe had already been adopted into the perfect home.

"While they weren't able to adopt Zoey, they will make a good home for another dog who needs them," says Aggie. "The event was awesome, people came from all over to adopt, and there were so many volunteers present. It all went so smoothly." 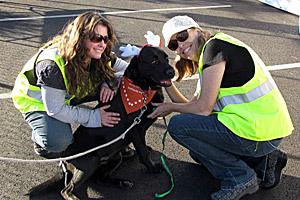 As Aggie relays the delightful adoption tales her organization experienced at the event (they adopted out eight cats and three dogs), she also starts to convey how great the other groups did. She was truly excited for the numbers and special adoptions of her rescue colleagues. The event brings everyone together for the common goal: realizing a time of No More Homeless Pets. The cherry on top is taking pride in their collective success.

One of the other groups that had some special adoptions was Hurricane Animal Shelter. They adopted out a couple of adult black dogs, Brisco and Jenny, who had both been at the shelter since November. Shelter supervisor Linda Melin echoes similar sentiments on what the event means to them: "It was so well run and organized. It was a pleasure to be there. We want to do all we can to adopt out our animals like staying open late, etc., so being part of this event is important to us."

One of the groups to travel the farthest was Davis County Animal Care and Control. They drove over five hours down from Northern Utah. Tracy Roddom, shelter manager, relates why they made the trek: "Our shelter needs to take advantage of the exposure a Super Pet Adoption gives the animals. Best Friends has the marketing expertise to make these events very successful. We were thrilled to be invited, and we brought along some dogs from Cache and Weber County to give them an opportunity to find homes, too." All 18 dogs that they brought along were placed, and again, they opened their arms to help out other municipal shelters, so it's a victory for the larger animal welfare community. As Tracy says, "We partner with Weber a lot. They help us out, and we help them out."

Holly Sizemore, Best Friends director of Community Programs and Services, who has seen these events really take off, says, "Sure, everyone loves super adoptions because it's so great to see so many beautiful, loving animals get adopted. I also adore them because they demonstrate the power of collaboration and strong marketing practices amongst shelters and rescue groups."

Find out about upcoming events.