Image
Christmas comes to the Sanctuary in the form of generous, donated gifts.
By Christelle L. Del Prete

All across the Sanctuary on Christmas Eve, dogs, cats, bunnies, parrots and barnyard pals slept snugly in their beds while a fresh layer of snow blanketed Angel Canyon. When the animals awoke on Christmas morning, the air was swirling with glittering white flakes and excitement. For weeks, caregivers had been saving up generous in-kind donations from Best Friends members and supporters who wanted to share gifts that give back. The result: an impressive cache of toys, treats and bedding for the deserving Sanctuary pets. 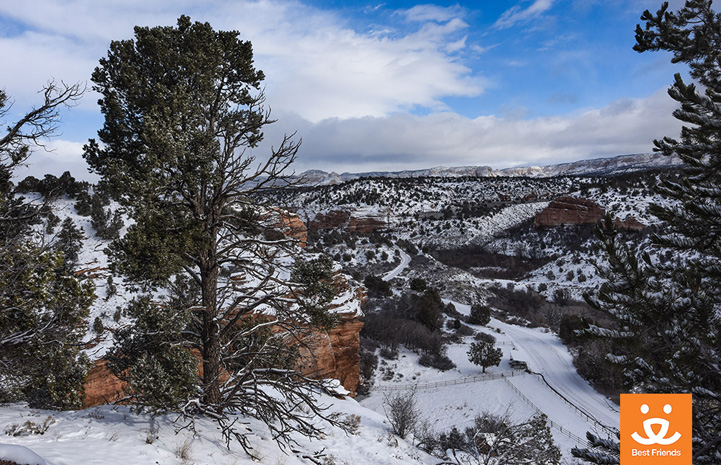 The Christmas day gift-giving bonanza is one of the things that make Best Friends one of the best charities to donate to. It helps ensure that every one of the animals has a bright and jolly holiday. Besides the top-notch love and care they receive all year round, special toys, yummy treats and extra attention remind our furry and feathered friends that the spirit of Christmas is alive and well in people’s hearts — and that Santa hasn’t forgotten homeless pets.

In Dogtown, Santa’s “sleigh” took off bright and early. A trailer, pulled by an ATV and piled high with gifts, made the rounds to each and every one of the buildings in Dogtown. The door-to-door delivery made it possible for some very special dogs to pick out their presents.

Scratch, a 12-year-old Hurricane Katrina survivor, was one of them. Scratch is still recovering from a recent major surgery, but that didn’t mean he had to miss Christmas. Bundled up in a warm green-and-red sweater, Scratch was lifted gently into the trailer to pick out a special toy. After considering a plush pink toy pig, he instead chose a big colorful jack-shaped stuffed toy with six squeakers. Then, needing a rest, he took the toy back to his room and his oversized bed — a gift he’d received earlier this year from a volunteer. 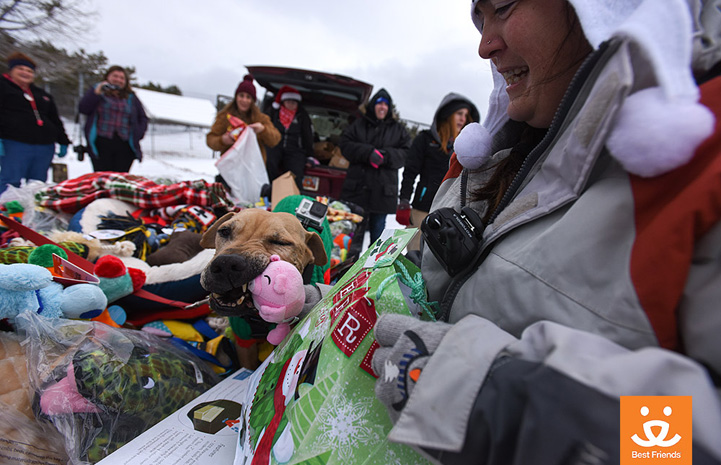 When the sleigh pulled up beside the puppy building, Chandler, a fluffy little terrier pup who’d come to Best Friends after being abandoned, took his turn. Though he was nervous at first when he was placed in the toy trailer, Chandler soon realized that he’d hit the jackpot. He romped and hopped around in the pile until he found exactly what he was looking for — the little toy pig Scratch had left behind.

Meanwhile, in the Parrot Garden, each and every bird got to unwrap his or her own special package. In the days before Christmas, Parrot Garden volunteers spent hours wrapping up wood-and-rope toys in plain brown bird-safe paper and twine. And when Christmas day came, the birds munched on “birdie bread” (similar to fruitcake, but tastier and baked specifically for birds) as they peeled back the wrapping paper and unveiled fun, interactive toys.

Willie, a green-winged macaw, was especially excited. Though he’s almost 50 years old, he still loves toys — especially the kind that make him think (which also keeps his mind active and sharp). When Willie started to see the rope and wooden pieces peeking out of the paper, he couldn’t wait to unwrap his toy the rest of the way and to start playing with it. 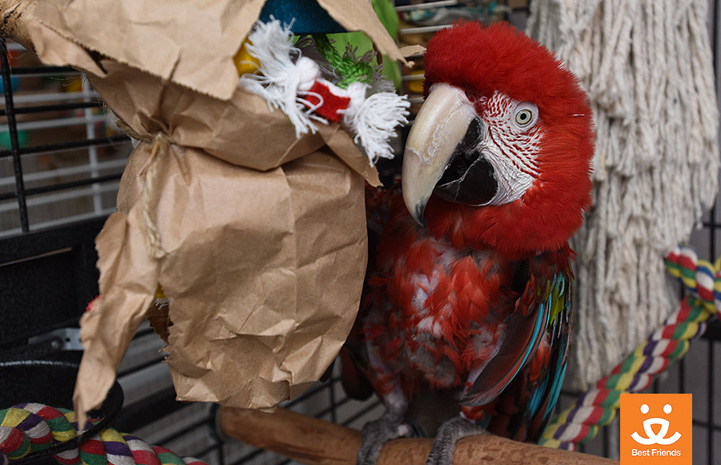 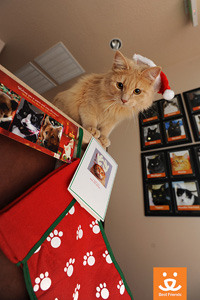 In Cat World, Santa made his presents — and his presence — known. While caregivers were busy sifting through a large number of donated toys, treats, cat trees, beds and blankets, Jordy, a young special-needs cat in the Guardian Angel program, had a very special job to do. This year, he got to wear a Santa suit and play “Santa Paws” in Cat World Headquarters. Previously, that had been the job of a senior cat named Mozart, but this year Mozart was happy to hand the torch to his active young friend and to play an elf instead.

While Jordy claimed the Cat World volunteer coordinator’s desk as his throne, caregivers hurried back to their buildings with armloads of gifts for the cats. Even Santa got to join in the fun — Santa the cat, that is. The handsome black-and-white kitty had just moved into his room in Cat World that day. Before coming to the Sanctuary, he’d been living at a small rural shelter. But Santa, who is shy and has FIV (feline immunodeficiency virus, which weakens a cat’s immune system), was having a hard time finding a home of his own. Now, along with some catnip and little stuffed cookie toys, Santa will have an excellent chance of finding exactly that.

Of course, Christmas isn’t just about presents, and many of the animals took time out of their holiday to enjoy the simple things that make their lives great. A poodle mix named Feliz, who, with his fluffy white coat, is almost invisible in the snow, had a good romp in the cold white stuff. When he was done, he raced back indoors to roll around in his caregiver’s lap. 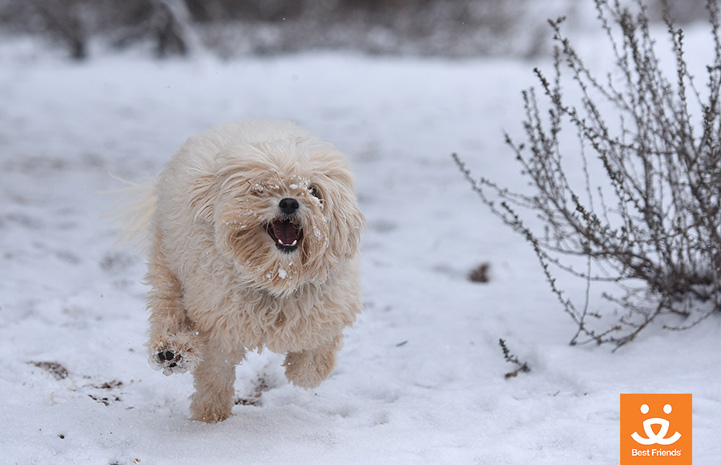 Delaney, Claire and Elton — three dogs who suffer from a chronic condition called brucellosis — all got extra snuggles from their caregivers. In fact, after all the new toys were picked out or unwrapped, and bellies were full of tasty treats, snuggles seemed to be the perfect way to close out the day. And, as the quiet night settled once again over Angel Canyon, the animals drifted off to sleep, warmed by love, good cheer, soft blankets and all the magical generosity the holidays bring.

Still in the holiday spirit?